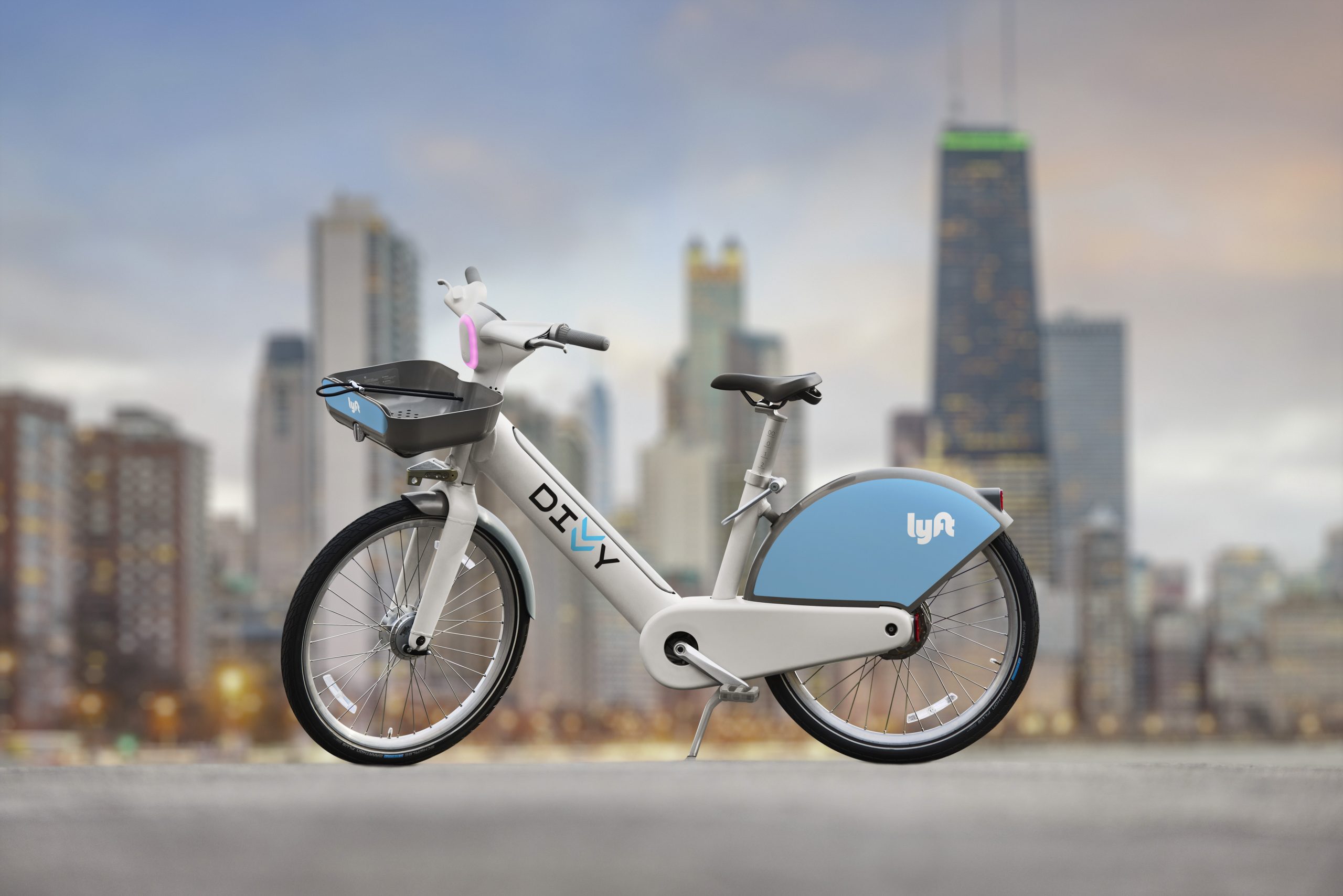 In year two of the coronavirus pandemic, Chicago area residents continued to adapt to a changing world and adjusted their transportation habits and expectations for this new reality.

Through it all, the Active Transportation Alliance worked with our community partners and legislative allies to fight for more residents to have access to safe, convenient, affordable, and sustainable transportation options.

Here’s a look back at 10 of the most important walking, biking, and transit stories and advocacy victories of the year.

While the bill was being developed, Active Trans and our allies lobbied members of Congress directly and organized hundreds of area residents to connect with their representatives to share their transportation priorities — and the work isn’t done.

The state of Illinois has broad discretion in how to spend federal funds and Active Trans is committed to making sure racial equity and climate change are considered with all transportation investments.

Illinois legislators passed a bill mandating that the state cover 100 percent of the cost of walking and biking infrastructure on state roads, just like it does for cars and trucks. The bill became law in August.

Active Trans championed the legislation along with Ride Illinois and the Metropolitan Planning Council. Together, we organized advocates from across the state, testified before House and Senate committees, and lobbied members of the General Assembly.

Previously, the state forced cities and towns to cover 20 percent of the cost of additions like sidewalks and bike lanes. This often led to this critical safety infrastructure getting stripped from final project designs, especially in low-income communities.

Building off the biking boom during the pandemic, Divvy surpassed 4 million rides in September, crushing the previous record of 3.81 million in 2019 with three months remaining in the year.

Divvy also rolled out a new version of its popular electric-assist pedal bikes (see top photo) and continued its ongoing expansion to all 50 wards. Active Trans and our partners throughout the city organized to bring bikeshare to Chicago and we continue to fight for a more accessible and equitable bike-sharing system. 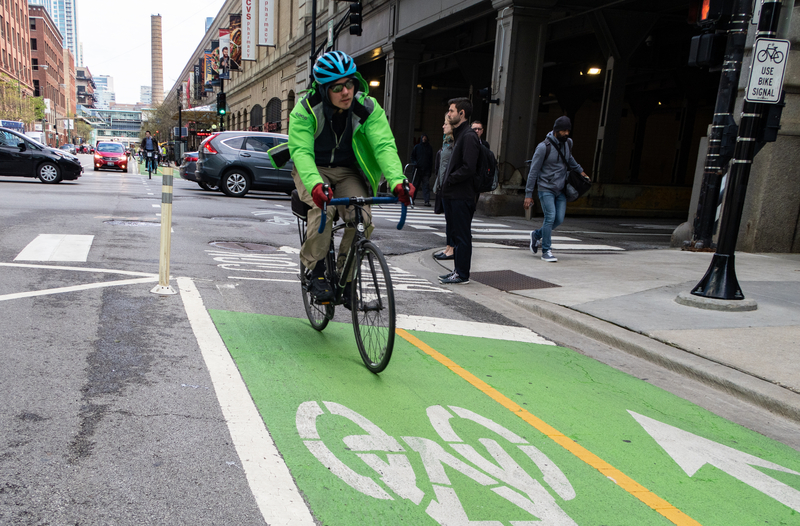 The 12 planned miles of new PBLs represent a 50 percent increase in the number of protected bike lane miles in the city. This is real progress and it’s the result of the relentless advocacy efforts of our supporters and community partners in neighborhoods across the city.

Of course, major gaps still exist in the network and the pace for closing them isn’t nearly fast enough, as our bike network report demonstrates.

As these local transit agencies work to regain riders lost during the pandemic and better serve essential workers who continued to ride, CTA and Metra both made low-cost transit passes permanent.

This includes a $5 all-day pass on CTA and a $10 all-day pass on Metra. A $6 all-day pass for areas close to and including the city will be rolled out early next year. CTA also eliminated the 25 cent transfer penalty for people moving between buses and trains.

These changes save riders money and encourage people to ride more often throughout the day — two goals outlined in our Fair Fares Chicagoland campaign (PDF).

In May 32-year-old Kevin Clark was hit and killed by a driver while he was riding his bike through the dangerous Logan/Western intersection in Logan Square. Clark gained fame as the drummer in the 2003 School of Rock film starring Jack Black.

The area where Kevin was killed has long been recognized as a treacherous area for people walking and biking. In 2018 Active Trans developed a community-informed vision to improve the intersection, but the city did nothing to make the intersection safer.

This time things were different. We worked directly with Kevin’s family and local elected officials to demand that the city act.

In September, city officials announced the intersection would be upgraded by 1) removing a travel lane for cars as they approach the intersection and 2) making space for protected bike lanes.

Our suburban transit system took an important step forward recently when Pace announced a commitment to zero emission vehicles by 2040 in its strategic plan. 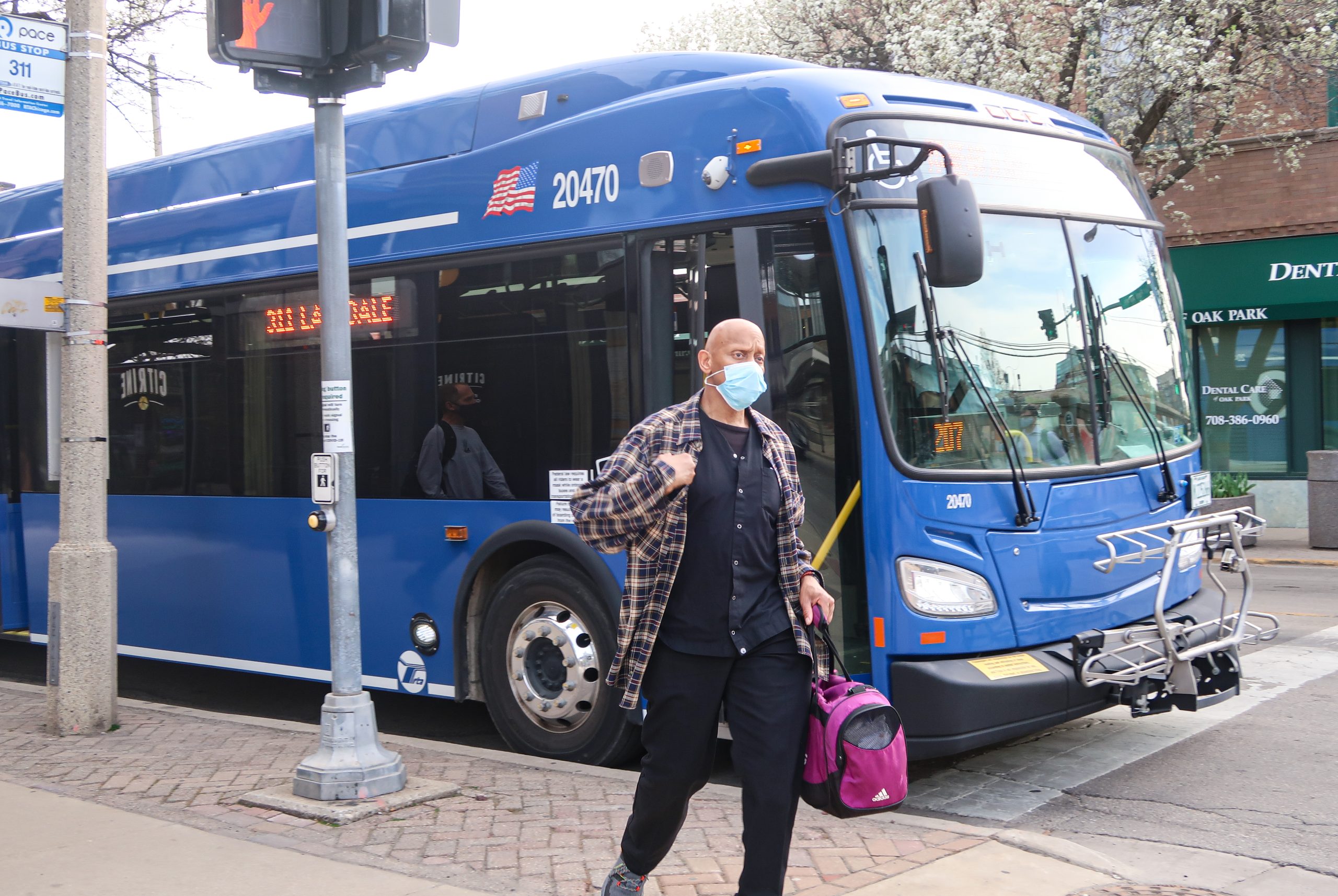 In making this commitment, Pace is joining CTA in planning to phase out diesel and compressed natural gas buses within 20 years. This transition will help improve the air quality and health in countless suburban communities that rely on Pace to provide an affordable, sustainable transportation option for their residents.

Earlier drafts of the plan simply stated the agency would explore the feasibility of transitioning to electric vehicles. The shift came after months of advocacy efforts led by Sierra Club Illinois, Clean Power Lake County, and the Climate Reality Project, with support from Active Trans and other civic and environmental groups.

Two high-impact transportation projects decades in the making were finally completed in 2021. In June Chicago finished the final phase of the Navy Pier Flyover, allowing people walking and biking on the Lakefront Trail to bypass the car and truck traffic in and out of Navy Pier. 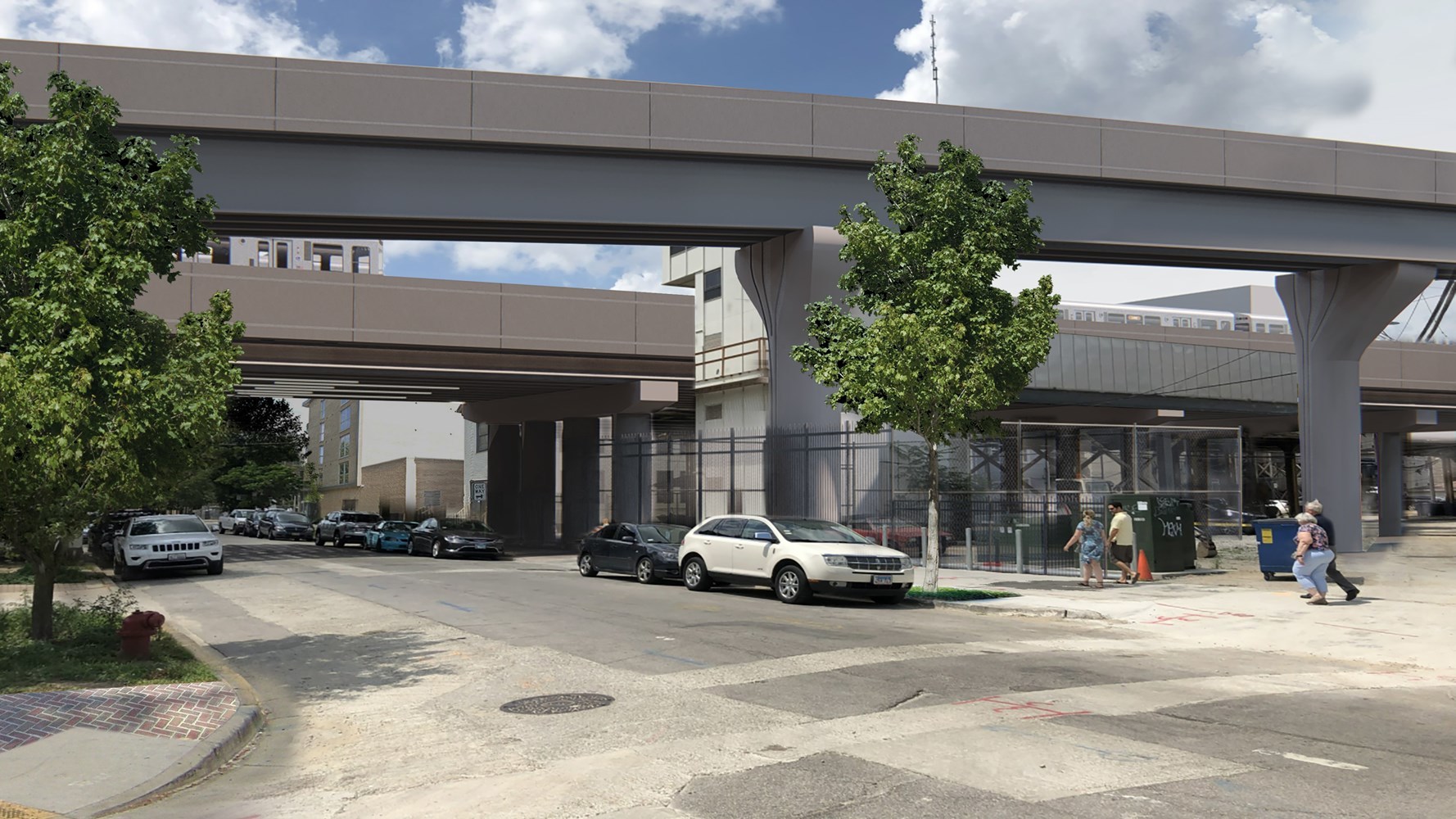 Then in November CTA unveiled the Belmont Flyover on Chicago’s North Side, eliminating one of the biggest chokepoints in the transit system. It’s a move that will benefit riders across the city (photo above courtesy of CTA).

After working with partners for many years to advance these projects, it’s exciting to see them become reality.

For years Active Trans has worked with community partners across Chicago’s Southeast Side to develop a vision for a new trail that would connect neighborhoods and outdoor recreation space in a part of the city that’s isolated by heavy industry. Now we’re closer than ever to that vision becoming reality (rendering of the trail pictured below). 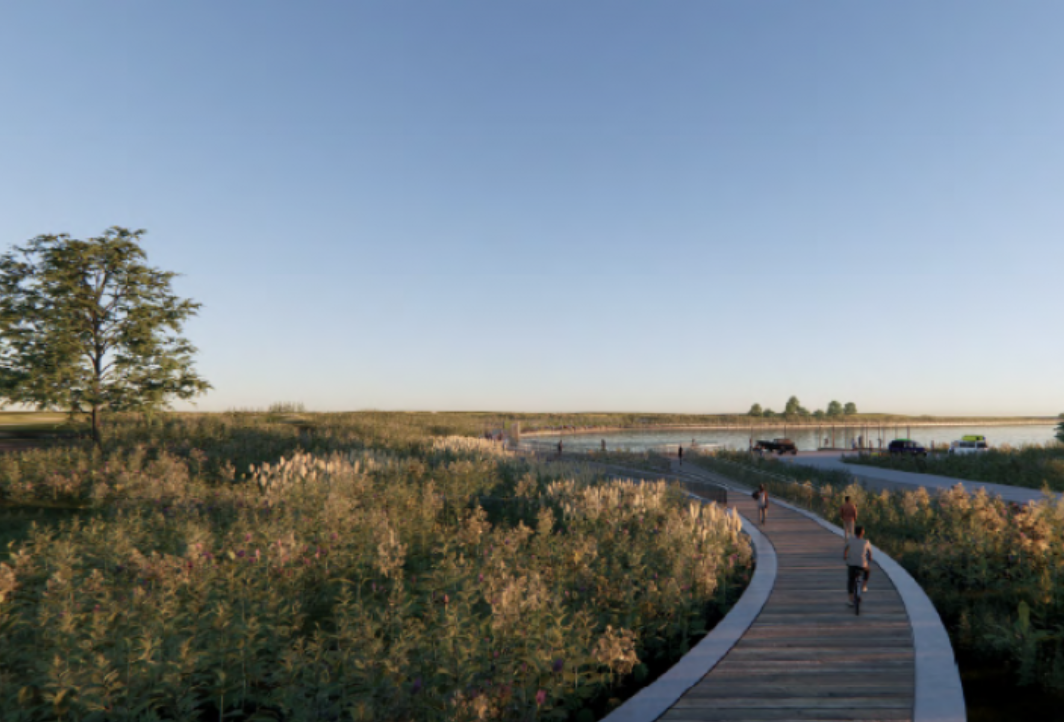 The event featured testimony from community leaders and the local alderwoman and the local congresswoman — all of whom committed to working together to support and fund the project.

We’re happy to report that project lines up well with newly available state and federal funds.

Outside Chicago, Active Trans continued to work with and support advocates in suburban communities across the region fighting for better walking and biking.

Bike Walk Oak Park is working on implementing its Greenways Plan and creating a dedicated funding source for walking and biking improvements through the village’s Capital Improvement Plan.

Cycle Brookfield is a newly established membership-based, non-profit with a mission of making it safer, easier, and more fun to bike in and around the Village of Brookfield.

These are just a few of the citizen-led groups we’re supporting and advising in the suburbs.

None of this is possible without support from advocates like you. You can show your support by joining Active Trans or renewing your membership, or donating today.

Photo at top courtesy of Divvy.