Kevin Clark’s family and others urge city to take action 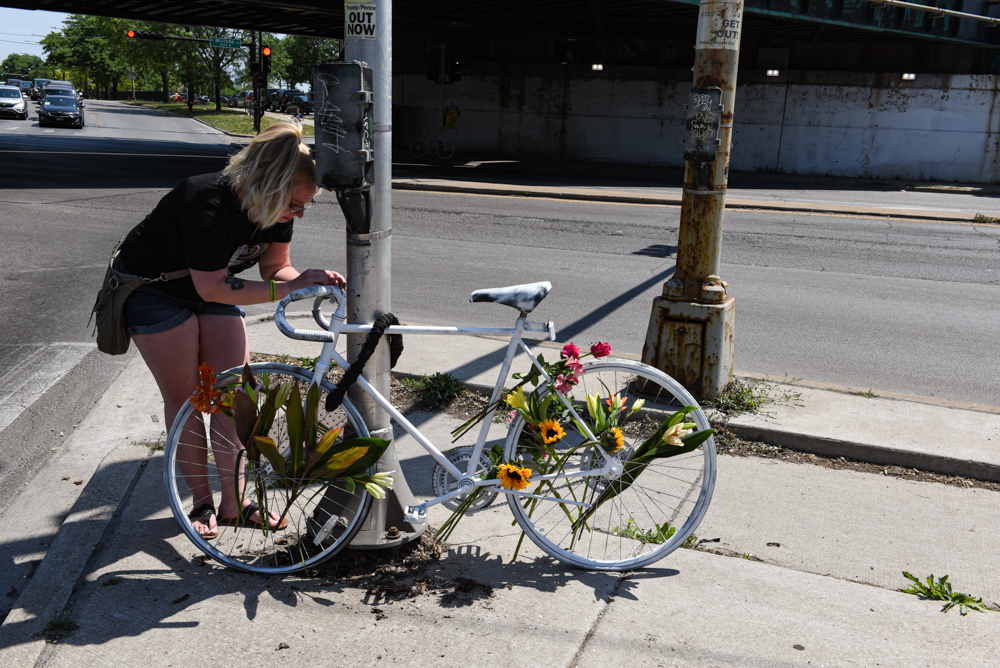 Around 100 people gathered on Saturday in Logan Square to celebrate the life and legacy of Kevin Clark, who was tragically killed while riding a bike on May 26.

Kevin was hit by a driver at the intersection of Logan Boulevard and Western Avenue, a spot that has long been known to be very dangerous for people walking and biking.

During the vigil and press conference, family members shared details about Kevin’s kind and gentle nature, his love of music, and how devastating Kevin’s loss has been.

Kevin was a drummer and music educator well known for his role in the 2003 School of Rock film, starring Jack Black.

A central message among the people who spoke is that elected officials and city agencies must take action to make the intersection safer for everyone.

“Kevin was such a kind, loving, joyful person,” Kevin’s mother, Allison Clark, said to the audience. “Losing him has been the worst thing to ever happen to our family. To the people who can make this intersection and the streets of Chicago safer, please, do it! Take action now.” 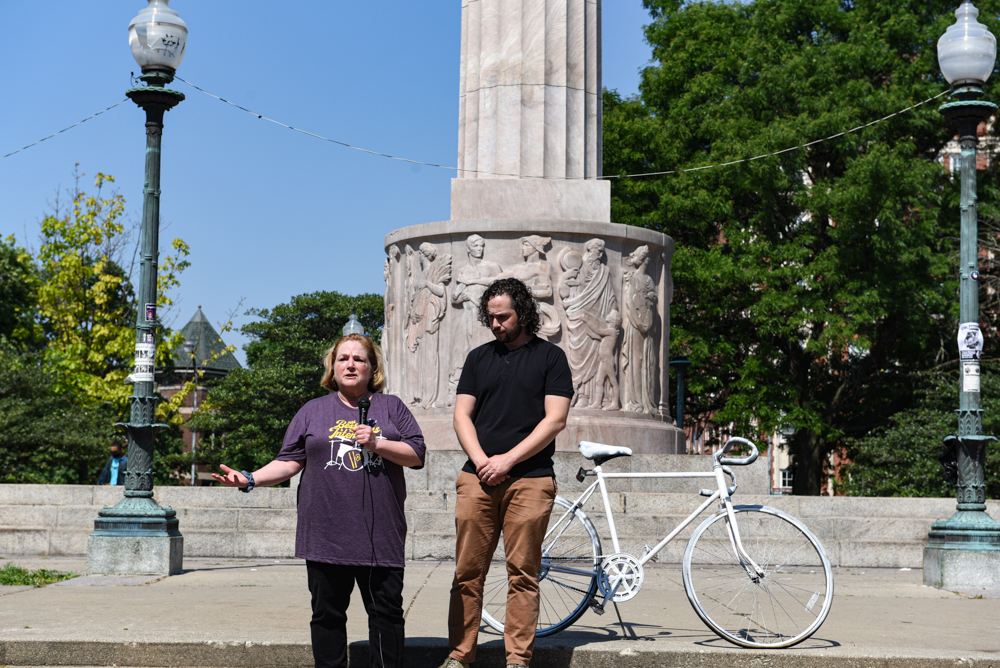 Kevin’s accident is just one of thousands that have happened in and around that intersection in just the past several years. Everyone in this neighborhood knows how dangerous it is. The city knows how dangerous it is. This is a no-brainer. Make that intersection safer. No more waiting. No more studies. Fix it now. But understand very clearly, to Mayor Lightfoot. To Governor Pritzker. To CDOT and IDOT and anyone else who can affect change with our streets. Fixing that intersection is the bare minimum that you can do. Chicago is a beautiful place to ride a bike. But it needs to be a safer one. So please, do more to make Chicago’s streets safer for cyclists and for everyone.

“There are too many ghost bikes,” said Kelly. “There are simple infrastructure changes that can save lives.” 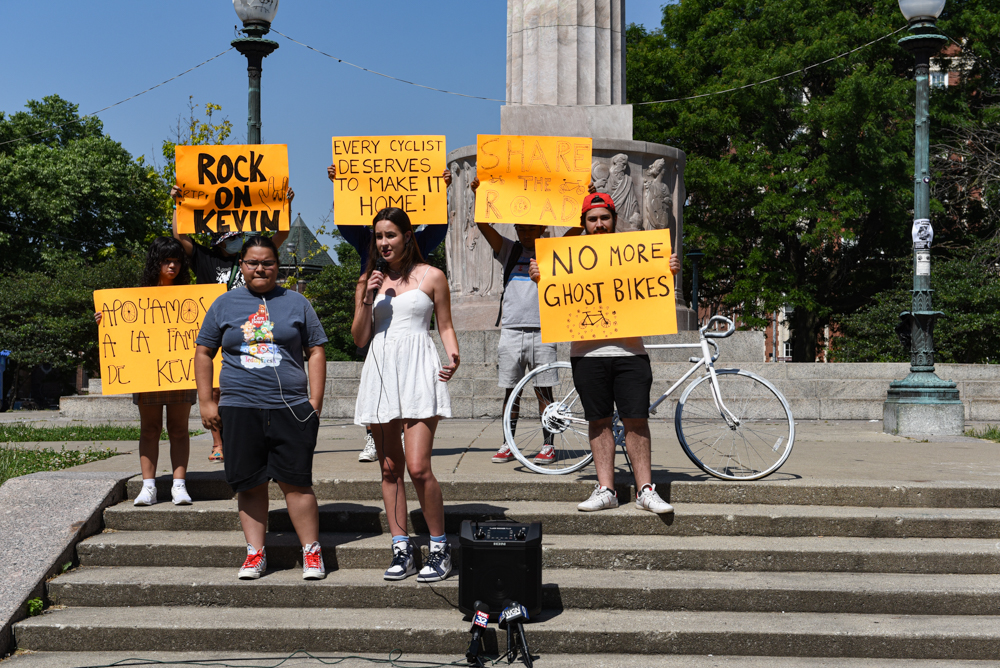 Ald. La Spata said he has been urging the Chicago Department of Transportation to fix that intersection in recent years.

“There is much we can do to make that intersection safe,” said Ald. La Spata. “Everyone who bikes in this city is trying to get home to someone who loves them.”

After the vigil and press conference, family members and supporters installed a ghost bike in remembrance of Kevin at the intersection where he was killed.

A ghost bike was also reinstalled for Tyler Fabeck, who was killed while biking at the intersection in 2008. His ghost bike tribute was removed in recent years.

To continue on with Kevin’s legacy, Portman and others launched a website, Kevin’s Coda. The site is helping Kevin’s family raise money for an organization that supports music education and it also highlights the work that Active Trans is doing to make Chicago safer for people biking. 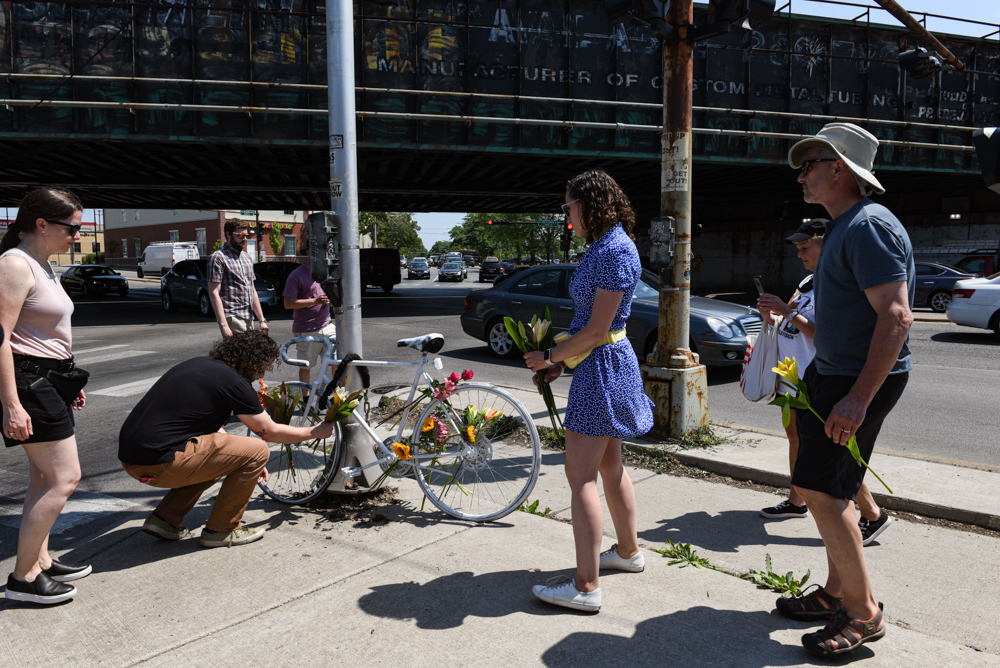 The area around Logan and Western has long been recognized as a treacherous spot for people walking and biking.

In 2018 Active Transportation Alliance worked with the Logan Square Neighborhood Association to develop a suite of community-informed recommendations to improve the intersection, including removing a travel lane for a short segment, adding a protected bike lane, and enhancing crosswalks and lighting.

In 2008 22-year-old Tyler Fabeck was tragically hit and killed while riding his bike through the intersection. Countless other people walking and biking have been hit or nearly hit by cars or trucks at the location, and others avoid the intersection altogether because the safety issues are well-known.