Belmont Bypass is about more than just saving time 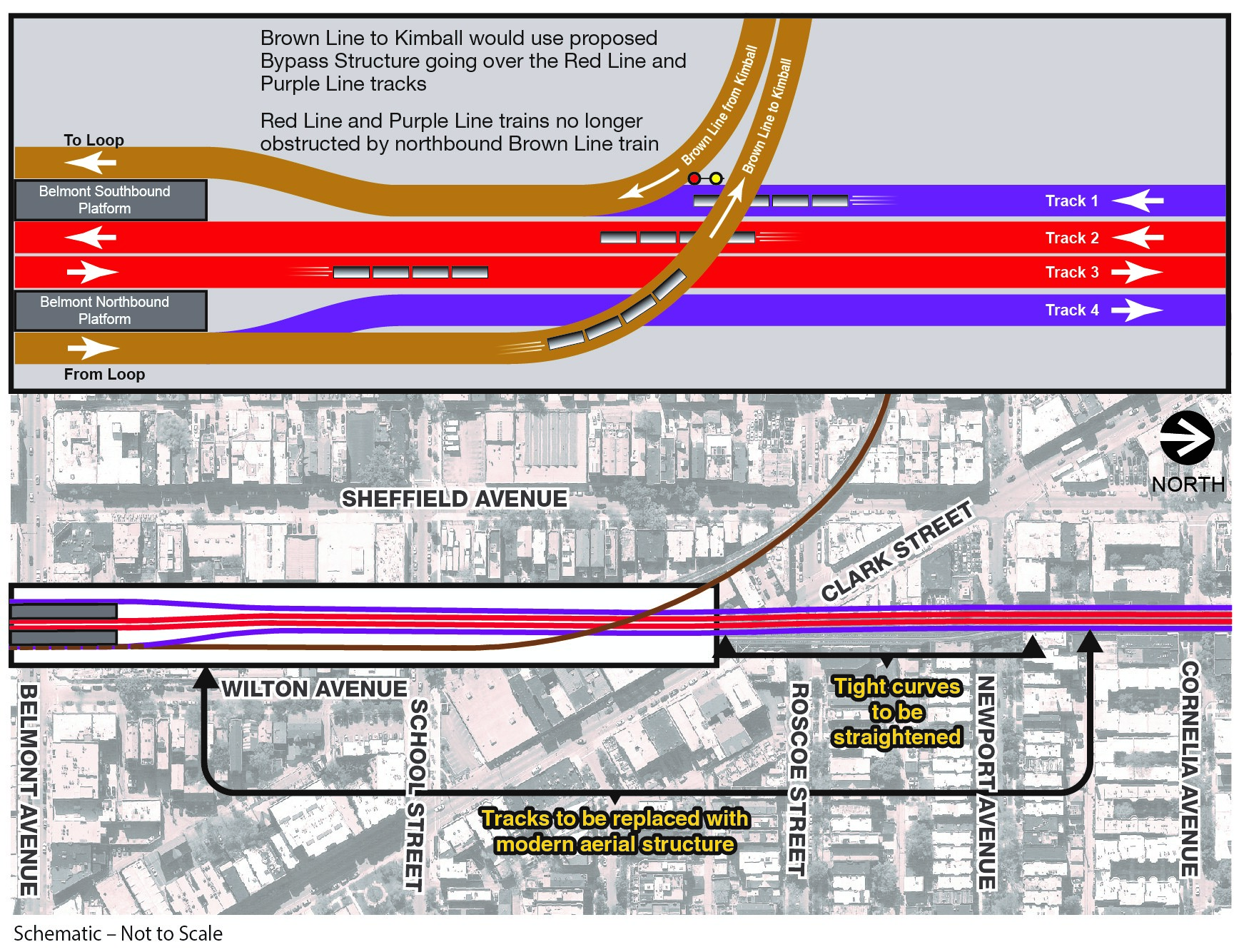 Transit systems as large as Chicago’s are complex networks where one seemingly minor issue can cause ripple effects throughout the entire system, slowing trains and frustrating riders all over city.

For decades the Clark Junction on the North Side, where the CTA’s Red, Purple and Brown Line trains meet, has been one of those problem spots. Currently, trains on three of the four tracks in the area are forced to stop to allow northbound Brown Line trains to cross.

This bottleneck results in 40 percent of weekday trains being delayed by as much as three minutes. The proposed Red-Purple Bypass would eliminate these delays by building a structure allowing Brown Line trains to pass over the top of existing tracks.

The immediate time savings from the new structure is the most obvious benefit of the project, although it’s far from the only one. More critically, the logjam and the dated infrastructure that exists along that stretch prevents the CTA from being able to run more Red, Purple and Brown line trains through the corridor to relieve congestion.

Red Line ridership on the North Side has risen 40 percent during rush hour over the past five years, and projections indicate demand will continue to increase dramatically.

If the CTA is unable to add service to accommodate these new riders, trains will become more crowded than they already are and more riders will be forced to watch packed trains go by during peak periods. Frustrated riders will consider driving if they view it as more convenient.

The bypass is the single largest capacity expansion and time-saving element of the ongoing Red Purple Modernization (RPM) Program. The bypass alone would allow the agency to add 30 percent more service during rush hour to reduce crowding, benefiting more than 7,200 riders per hour.

So opponents who focus solely on the time saved by eliminating the delay at the junction are missing the most important point. The project would give CTA the ability to add service in the most congested and fastest growing portion of the city’s transit network, and would benefit riders throughout the system.

Riders and neighborhood residents can learn more about the project at a public hearing on Wednesday, June 3 at 6:30 p.m. at the Center on Halsted (3656 N. Halsted St.).

You can also view video renderings of the project from street level and track level on the CTA’s project website, as well a new lighthearted video featuring interviews with everyday riders. The CTA is in the process of seeking community feedback and finalizing funding and design, with construction to begin as early as 2017.

If you can’t attend the hearing, you can also submit comments via email to redpurplebypass@transitchicago.com. Be sure to CC transit@activetrans.org so we can monitor feedback from members and supporters.

Image courtesy of the CTA.