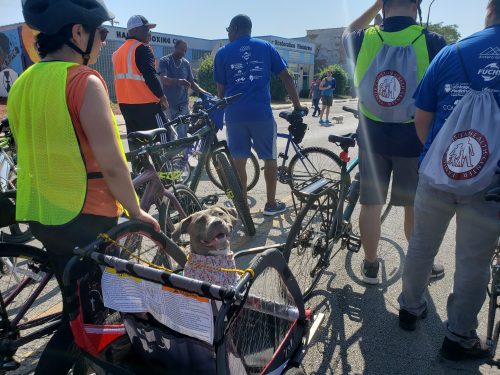 The fight for safer streets for people walking and biking in Chicago’s suburbs has gained strength during the pandemic.

Groups and individuals have been organizing local bike rides and walks, creating petitions to improve traffic safety, launching new websites, forming as non-profits, and building support from elected officials to invest in walking and biking infrastructure.

To recognize their dedication and to help support their ongoing work, Active Trans awarded small stipends to a handful of advocacy groups and communities.

Learn more below about how each group is making our region a better place to walk, bike, and live. There’s also information about how you can get involved.

Bike Walk Oak Park is working on implementing its Greenways Plan and creating a dedicated funding source for walking and biking improvements through the village’s Capital Improvement Plan. Additionally, the group became a nonprofit this year, launched a new website, and created a crash report form to document walking and biking crashes and close-calls to understand areas in need of safety improvements. Learn more about some of Bike Walk Oak Park’s initiatives in a video featuring Sylvia Schweri. The video was created for Suburban Action Week, an online event that Active Trans hosted earlier this year.

The City of Harvey is enhancing local mobility options by updating its Transit-Oriented Development Plan. In September, the city hosted the Harvey Wheels Festival to promote wellness and bike safety. The event included a community bike ride, bike-riding lessons, wellness services, live music, and other activities. The stipend from Active Trans helped the city cover the costs for bike helmets given to participants.

Cycle Brookfield is a membership-based, non-profit with a mission of making it safer, easier, and more fun to bike in and around the Village of Brookfield. The group has built a strong bicycling community through advocacy, education, and event organizing. Every year it organizes First Friday Slow Roll Rides and Bike Brookfield Week, among other events. The group works closely with village staff and is a driving force behind a side path to the Brookfield Zoo. Organizers Chris Valadez and Terri Rivera shared details about Cycle Brookfield’s advocacy efforts during this year’s Suburban Action Week, hosted by Active Trans.

Cycling Without Age McHenry County is part of an international initiative that provides free, recreational rides to isolated seniors on three-wheeled bikes called trishaws. The goal is to reconnect seniors with their community and the outdoors, allowing them to “feel the wind in their hair.” Learn more about the program in this video presentation featuring Greg Glover of the McHenry County Bicycling Advocates.

Elgin Community Bikes is a non-profit focused on connecting people and creating a healthier, happier, and more equitable community through bicycles. It operates a community bike shop in downtown Elgin and hosts fun, social bike rides for all ages, including monthly Full Moon rides and Kidical Mass rides. Organizer Parker Thompson offered tips for other advocates on the topic of engaging your community during our Suburban Action Week.

Friends of the East Branch DuPage River Trail are pushing for the funding and construction of the East Branch DuPage River Trail (EBDRT) in DuPage County, which would connect the Illinois Prairie Path, Great Western Trail, and Morton Arboretum. You can get involved and help spread the word by signing their petition, ordering an EBDRT yard sign, and contacting your elected official. Organizers Ginger Wheeler, Libby A’Hearn Gilmore, and Steve Johnson described their efforts and lessons they’ve learned along the way in this video.

Advocates from the City of Markham, Riverdale, and South Calumet region want to see improved walkability, bikeability, and transit service in and around their communities. These longtime community advocates are interested in seeing safer transportation options for people going to everyday destinations in Chicago’s south suburbs and accessing nearby forest preserves and parks, including Beaubien Woods, Kickapoo Woods, and Big Marsh Park. Walk audits are currently underway to gather information about sidewalk and crosswalk conditions in the area. If you’d like to get involved, contact maggie@activetrans.org, and we’ll put you in touch with local advocates.

Skokie Bicycle Network is a newly-formed group working to build community and promote better cycling in the Village of Skokie and neighboring communities. This year the Skokie Bicycle Network organized multiple themed bike rides; hosted pop-up pit stops along Skokie’s trails and paths; created a library of low-stress, family friendly bike routes; and has been monitoring and providing input on local infrastructure projects.

Walkers and Bicyclists for a Safer Community (WBSC) formed last year in the Village of Huntley to advocate for safer conditions for people walking and biking in Sun City, a local community for active adults 55 and older. With an eye toward education and awareness, the group started a petition to advocate for improved safety measures, including better traffic signage; it co-sponsored a pedestrian, cyclist, and motorist safety quiz with the Sun City HOA; and it participated in the Sun City golf cart parade by decorating a cart with a safety theme. The WBSC continues its efforts to encourage local leaders to stand up for safer pedestrian and cycling conditions.

If you’re interested in starting your own local advocacy campaign or would like to join our suburban advocacy listserv, check out our Bike Walk Every Town suburban advocacy resource page and contact Maggie Czerwinski at Maggie@activetrans.org to get started.