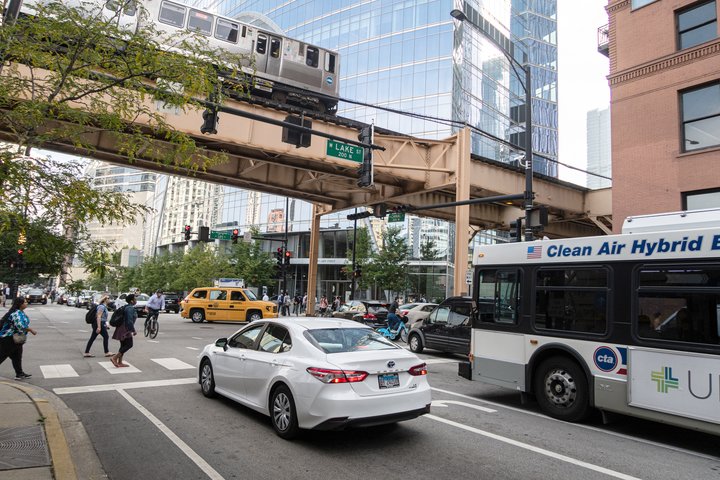 Congress passed a historic infrastructure bill that could help get more people walking, biking, and riding transit in the Chicago area, but more action is needed to strengthen the bill’s positive impact on climate- and equity-related concerns.

Take action asking your members of Congress to support a pro-transit reconciliation bill.

For more than two years, Active Trans worked with our partners in communities across the region making the case for a sustainable and equitable federal infrastructure bill.

We lobbied members of Congress directly alongside their constituents and hosted virtual events where congressional representatives spoke at length about their commitments to advance our shared goals. Our action alerts generated more than 2,700 connections in which Active Trans supporters asked their members of Congress to endorse key policy goals.

Following are breakdowns of the wins so far and what’s still needed to ensure further progress.

The infrastructure bill provides a historic opportunity to improve and expand public transit in the Chicago area. The bill contains the largest ever federal investment in public transit. This legislation will allow us to advance long-promised projects like the Red Line Extension and a network of bus priority streets. We urge our local officials to engage in robust community engagement and transparency as these projects move forward.

Overall, the bill fails to go far enough in establishing the transportation funding splits and policy needed to achieve real progress on our region’s climate and equity challenges. It maintains the inequitable 80/20 split in highway and transit spending. The road spending comes with very few strings attached and could be spent on projects that would move us in the wrong direction.

It will be critical to hold our elected officials and the Illinois and Chicago Departments of Transportation accountable to their climate and equity commitments in spending these funds.

Another big win is the new All Stations Accessibility Program, which earmarks $1.75 billion for retrofitting historic transit stations like CTA ‘L’ stops to make them wheelchair accessible. The funding will also cover digital improvements like creating new apps and wayfinding services for people with cognitive challenges.

Credit goes to Illinois Sen. Tammy Duckworth who championed this program with support from Access Living and transit and disability rights advocates from across the country.

For walking and biking, the bill includes a 60 percent increase for the Transportation Alternatives Program, which has funded many high-impact walking and biking projects in the Chicago area. These funds could be used to advance a community-informed vision for a citywide network of protected bike lanes in Chicago and safe and connected trail networks that extend into the suburbs.

WHY BUILD BACK BETTER IS NEEEDED

Contact your members of Congress today asking them to support a Build Back Better Act that includes these critical climate and equity provisions.