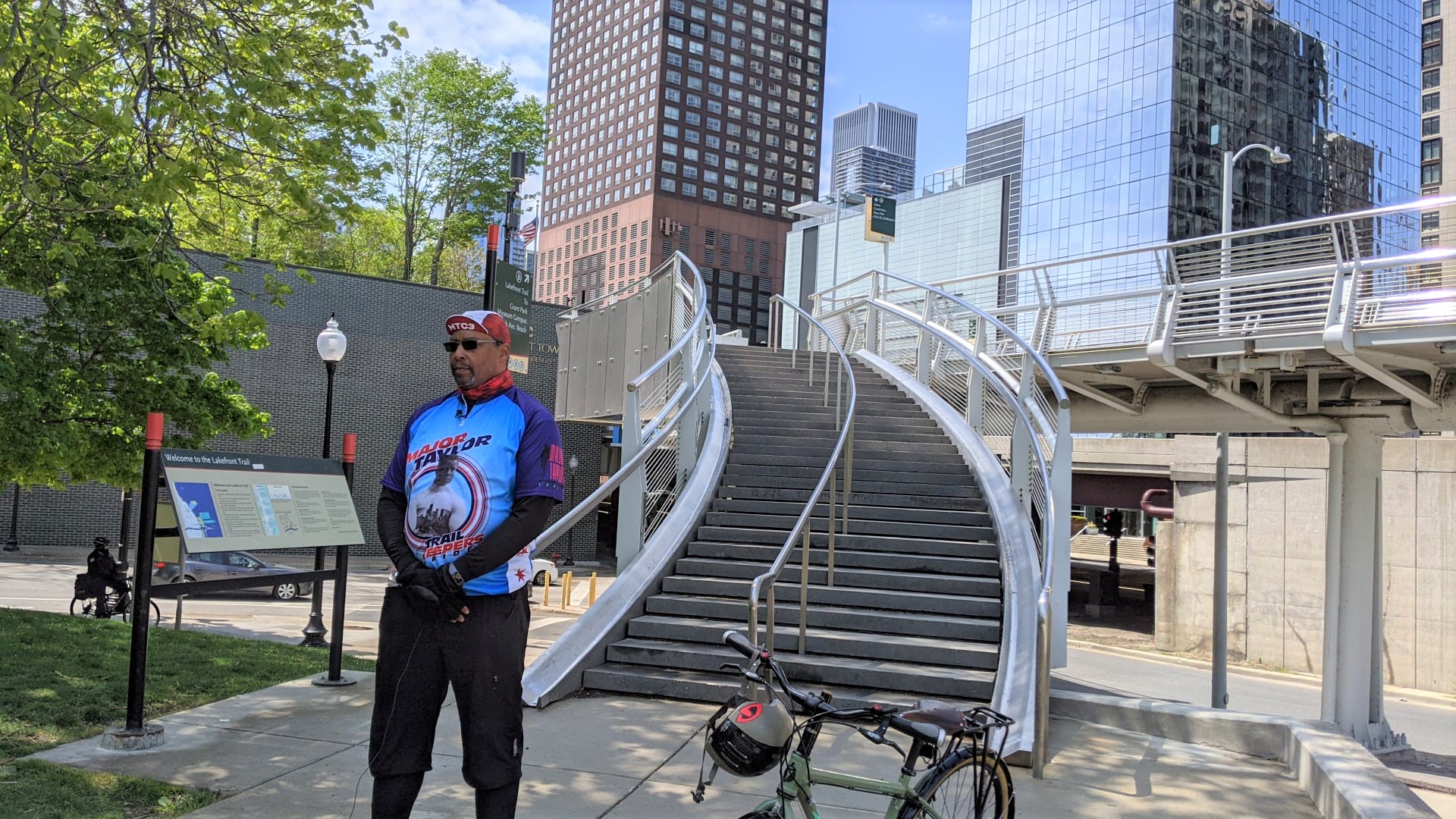 The wait is over. After several years of delays and a lengthy construction process, the Navy Pier Flyover is finally complete. The long-awaited bridge for people walking and biking will help ease traffic congestion and improve safety along the Chicago Lakefront Trail and near Navy Pier while enriching the city’s skyline with an iconic, one-of-a-kind architectural wonder.

Last month, Mayor Lori Lightfoot, Gov. J.B. Pritzker, the Chicago Department of Transportation, the Chicago Park District, and representatives from Active Trans celebrated this historic piece of walking and biking infrastructure with a ribbon-cutting ceremony, citing the transformative effects the flyover will have on the safety and beauty of the Lakefront Trail.

“The lakefront trail is undoubtedly one of Chicago’s crown jewels — a reputation that has only been amplified thanks to the completion of the Navy Pier Flyover project, which seamlessly connects our North and South Sides,” said Lightfoot in a press release. “This incredible project also improves public safety and provides stunning views of our lakefront and Navy Pier for pedestrians, joggers, and bikers alike.”

The flyover is an elevated bridge for people walking and biking that stretches a half mile from from Jane Addams Park and the Ohio Street Beach on the north to DuSable Harbor on the south — creating a continuous segment that links the north and south portions of the Lakefront Trail. It also includes a ramp that connects the trail to Navy Pier. 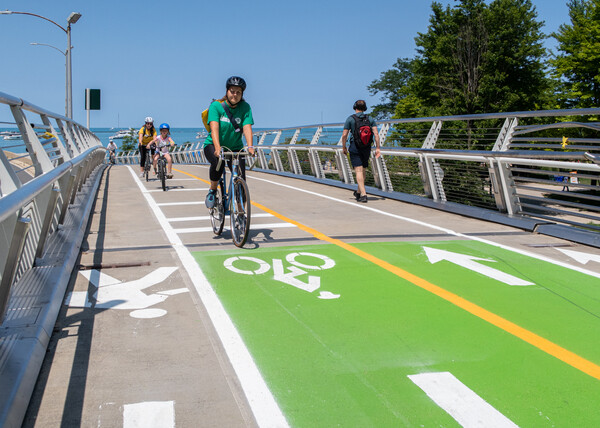 Constructed of steel and concrete, the flyover features a 16-foot-wide path with designated lanes for people walking and biking. It includes guard and handrails and lights that illuminate the path at night. The bridge also has signs, maps, and pavement markings to direct users to major landmarks, including the Museum Campus, beaches, parks, and Michigan Avenue.

The flyover was designed to reduce congestion and enable people to walk and cycle safely and uninterrupted over the Chicago River, DuSable Park, Ogden Slip, Illinois Street, Grand Avenue, Jane Addams Park, and the Ohio Street Tunnel — one of the busiest walking and biking corridors along the Lakefront Trail. 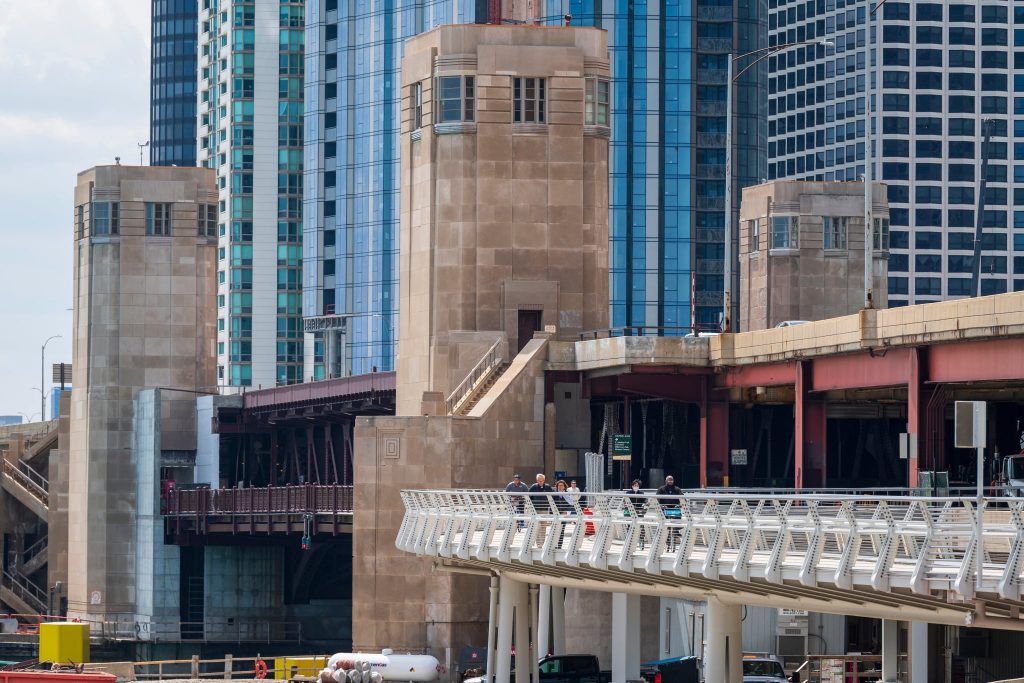 Prior to the construction of the flyover, accessing some of these locations on foot or by bike proved to be dangerous and confusing. Many of these places are near roads and major arteries that create traffic bottlenecks and crash hazards for pedestrians and cyclists.

For example, people walking and biking face a treacherous journey when they navigate the busy intersection at Illinois Street and Grand Avenue. With cars whizzing by, they had to traverse a narrow sidewalk along Lower Lake Shore Drive as well as poor sight lines and traffic conflicts.

“Many, many roads have less traffic than [the Lakefront Trail]. So it’s a major artery,” said Luann Hamilton in 2017, when she  was the deputy commissioner of the Division of Project Development for CDOT (she’s now on the Active Trans Board of Directors). “It’s carrying commuters, recreational users, and people who have other kinds of utilitarian trips, who want to bike and walk rather than drive to get to those destinations. That was the reason we pursued the flyover project.”

But the flyover isn’t just about function. Because it is located in a prominent part of the Chicago, CDOT wanted the flyover to be an iconic architectural piece in the city. The main design feature of the flyover is its serpentine form, curving around parks and buildings. A visually striking steel rib superstructure supports the bridge and accommodates its curves.

“I think it’s also going to be an icon of Chicago like the Bean and Millennium Park. It will be another great statement that’s along our lakefront and in our park system,” Hamilton said. “So I think we’ll actually get visitors who will want to try and use it and see it. It will be another attraction at Navy Pier to make the pier just that much more of a desirable place to be.”

The Active Transportation Alliance has been a longtime advocate for the flyover because it falls in line with our larger plan to create a continuous and quality Lakefront Trail that provides a safe, stress-free, and pleasant experience for people walking and biking. Active Trans began advocating for the flyover project in the late 1990s, monitoring its progress and pushing for completion all along the way.

In addition, Active Trans successfully advocated for the creation of separate paths for people walking and biking along the full length of the 18-mile lakefront trail. It worked with the Chicago Park District and the Chicago Area Runners Association on the lakefront trail separation project, providing advice and recommendations on how to ease congestion and conflicts on the trail by creating separate trails. The three-year project was completed at the end 2018.

Even though the flyover was just recently completed, it has already won several awards, including the American Council of Engineering Companies of Illinois Lincoln’s Grand Conceptor Award. It also earned a spot on Roads & Bridges magazine’s list of Top 10 Bridge Projects of 2020.

The flyover has been one of the most anticipated walking and biking infrastructure projects in Chicago in recent years. But it was plagued by a series of delays. The city broke ground on the project in 2014, expecting to complete it by 2018. The city had been working on the flyover for about 15 years prior to the start of construction. 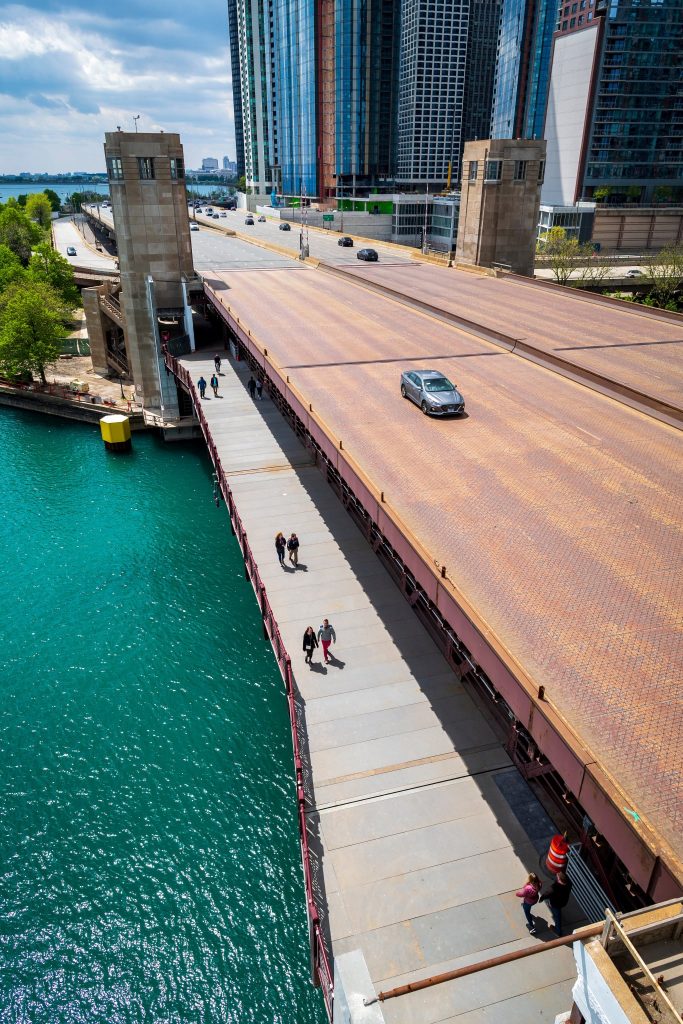 According to CDOT, the complexity of the design and engineering is one reason why the flyover took a long time to complete. Most of the materials for the flyover were custom fabricated. In addition, the flyover weaves through established parks and around buildings and streets — what Hamilton described as “threading the needle.”

Funding for the flyover also hindered the city from meeting its original deadline. Most of the funding for the $64 million project came from federal and state transportation grants.

But because of the state’s financial crisis, CDOT ended up applying for more federal grants than it anticipated. Most of the funding came from the federal Congestion Mitigation Air Quality program. CDOT had to educate the CMAQ committee that this project was not just a recreational initiative, but an important transportation project that would enhance safety and make the trail operate more efficiently, Hamilton said.

The flyover unfolded in three phases. The north segment opened to the public in 2018, stretching from the north end of Jane Addams Park to Ogden Slip. Phase 2 was completed in 2019. For this segment of the flyover, the bridge runs from the north end of the Chicago River Bridge over DuSable Park to just north of Ogden Slip. The final portion was constructed over the Chicago River. The city says it was the most complex part of the project because it entailed retrofitting the Lake Shore Drive Bridge and tunneling through the existing bridge houses.

Top photo shows Active Trans Board Member Peter Taylor standing in front of a stairway leading to the flyover. Bottom two photos are courtesy of CDOT.