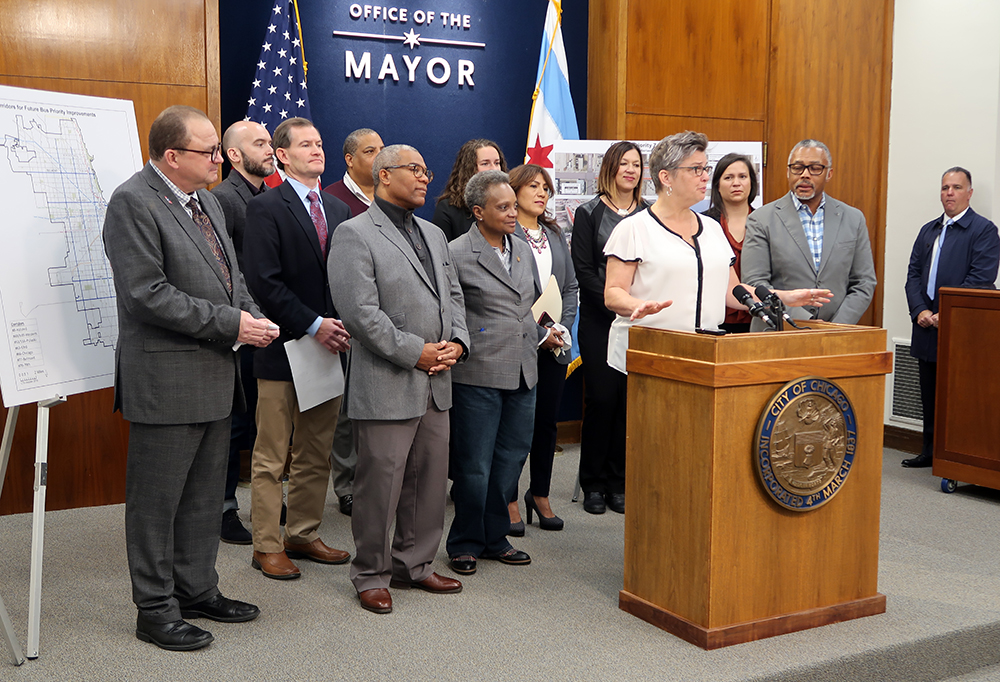 There were plenty of attention-grabbing developments among the top active transportation stories of 2019.

Some of these developments helped make our streets safer and more inviting for people using active transportation, while others were intended to give more people access to better transportation options.

Here they are. If we missed an important story, please let us know.

1. State dedicates funds to walking, biking, and public transit. For the first time ever, Illinois’ long-term capital program includes dedicated funding — $50 million annually — for walking and biking projects. The capital bill also includes sustainable funding for public transit for the first time ever. Active Trans championed both initiatives with a bipartisan group of legislators in the Illinois State House and Senate, and fellow advocates from across the state.

2. Mayor Lightfoot establishes new fees for Uber and Lyft. Mayor Lightfoot’s 2020 budget includes new fees on Uber and Lyft, with a portion of the revenue going to expand the city’s Bus Priority Zones program. Specifically, the Mayor raised the fees on solo rides and decreased the fee on shared Uber and Lyft trips citywide. In addition, she added a surcharge on trips that start or end in a new “downtown congestion zone.” Active Trans provided input on the policy as it was being developed and successfully lobbied for its passage.

3. Chicago expands network of bus priority streets. Chicago rolled out the red carpet for new bus lanes on Chicago Avenue, Western Avenue, and 79th Street — with more on the way in 2020. Mayor Lightfoot dedicated $20 million in local and federal funds to expand the city’s program in 2020 and 2021. Active Trans called for these changes in our Back on the Bus campaign, which first launched in 2017.

4. Chicago commits to expand Divvy citywide. Chicago City Council voted to amend its bike share contract and expand Divvy to all 50 wards over the next three years. The agreement, which kept the system in public hands, focuses resources in underserved areas on the Far South and West Sides. Active Trans successfully lobbied for its passage.

5. Leaders advance proposal to lower Metra fares, improve service in Southland. Cook County is working with the City of Chicago and regional transit agencies to reduce fares and increase service on South Side and South Suburban Metra lines. For years Active Trans has been part of the Coalition for a Modern Metra Electric, organized by Southland community leaders. The coalition has been on the forefront of the fight for this change. Cook County Board President Toni Preckwinkle spoke at Active Trans’ annual meeting about how this proposal would advance racial equity.

7. Chicago launches successful e-scooter pilot. Shared electric scooters proved to be a popular transportation option during a four-month pilot program — generating about 7,000 trips per day. Active Trans provided input on the pilot and issued a report calling for it to be made permanent. The report features a set of policy recommendations to help the city maximize the health, sustainability, and equity benefits of e-scooters

8. Pace Pulse bus service launches in suburbs. A new express bus line has rolled into Niles. Pace, the suburban bus service, debuted its Pulse transit service on Milwaukee Avenue, promising frequent, faster, and more reliable transit for one of the most heavily traveled corridors between the northwest suburb and Chicago. This is hopefully just the start of rapid bus network connecting Chicago’s suburbs.

9. Route 53 extension defeated in Lake County. Illinois Tollway announced that it’s ending the environmental impact study of a Route 53 extension, effectively dropping the project for the fourth time since it was identified in a regional transportation plan in 1962. Decades of advocacy by residents and environmental advocates led to this major win.

None of this is possible without support from advocates like you. You can show your support by joining or renewing your membership or making a donation today. Sign up as an Active Trans Ambassador to learn how to help lead the fight in your community.