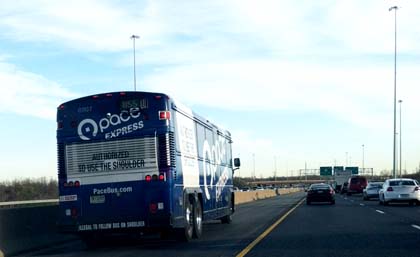 Chicago suburbs eager to attract people and companies should start by becoming more walkable and transit-friendly.

One place to look for successful ways to accomplish this is Pace’s “bus on shoulder” service. A recent Chicago Tribune article documents the growing ridership on routes between the suburbs and downtown Chicago that use the highway shoulders of I-55 and I-294. The buses can bypass traffic jams created by thousands of drive-alone commuters, allowing bus riders a faster and less stressful commute. Pace says the I-55 service would grow beyond the current 3,000 daily riders if they only had more buses.

Most suburbs are designed around the inefficient model of moving one person per car. Highway shoulders are part of that equation. They are designed for stalled cars, crashed cars and the emergency personnel who spend much of their time responding to both – but they’re not for buses.

Let’s give Pace and IDOT credit for retrofitting these shoulders to accommodate efficient buses. Only 6 percent of suburban residents commute to work by transit. Unless you work downtown and have convenient access to a Metra station, transit options generally aren’t good.

Bus on shoulder and other types of car-free, express transit can make transit viable for thousands of additional suburbanites. Indeed, this strategy shouldn’t be limited to routes going downtown. With most of the region’s large job centers in the suburbs, and few good transit options for commuting between suburbs, it’s time.

The idea is simple: create new rail service or, more likely, express bus routes on roadway shoulders or in dedicated bus lanes between suburbs. These routes would connect large suburban job centers and mixed use, higher density “metroburbs” where housing, retail and jobs are close together.

Unfortunately, the current Pulse plans do not feature dedicated bus lanes, which is critical to making transit competitive with private cars. They’re also not yet paired with mixed-use development opportunities at nodes along the route.

A more comprehensive strategy would bring people, jobs and retail together and in close proximity to a transit corridor, similar to what we see in cities like Chicago. Essentially, it creates a corridor of transit-friendly development amid the sea of anti-transit sprawl.

TOC would enable suburban residents to walk or bike to a bus that takes them directly to their suburban jobs. They could also transfer to Metra or an office shuttle bus. And because they live in a metroburban area, they can walk and bike to nearby destinations for shopping and other activities.

Some metroburban areas already exist around Metra stations, such as the central parts of La Grange, Elmhurst and Arlington Heights. Other metroburbs would need to be created. This could be new construction or retrofits, like the proposed conversion of the former AT&T office park in Hoffman Estates to a mixed-use community.

Here are three corridors ripe for suburban TOC. Each would connect to three or four Metra lines and multiple jobs centers:

This is the first post in Sprawlternatives: Strategies for Retrofitting the Suburbs, a new blog series that will feature bold ideas to make Chicago’s suburbs more walk, bike and transit friendly. To get involved in Active Trans’ suburban advocacy, learn about our Bike Walk Every Town campaign and contact maggie@activetrans.org.