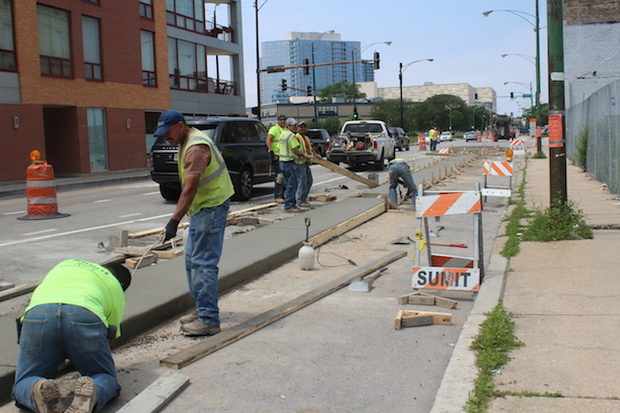 Legislators passed a $33 billion, six-year transportation capital program in an extended session over the weekend. Gov. Pritzker has indicated he will sign the bill into law.

The additional funds from the state will double the size of the program and could fund 125 new projects every year.

Thanks to everyone who took action and the legislators who championed this issue in Springfield. Legislators told us this never would have happened without Active Trans, and that includes our more than 20,000 supporters across Chicagoland.

Eligible projects include pedestrian refuge islands, new trails and upgraded crossings, protected bike lanes, and other safety infrastructure. The bill includes reforms to the program that make it easier for low-income communities to apply and secure funding.

The capital bill also includes sustainable funding for public transit for the first time ever. Transit receives $4.7 billion over six years and $281 million annually in capital funds after that. Public transit receives 23 percent of the transportation funding in the bill.

Revenue comes from a doubling of the state gas tax to 38 cents per gallon, significant increases in vehicle registration fees, and a variety of other sources.

STATEWIDE SUPPORT FOR BIKING AND WALKING

Active Trans supporters made more than 3,400 connections with legislators (emails, tweets, phone calls) over the last few months in support of putting $50 million annually toward biking and walking, and sustainable funding for public transit. This includes nearly 1,500 connections during the extended session over the last two days.

Legislators from Peoria to Elgin to Chicago’s Northwest Side to North Chicago championed the bike walk funding after dozens of meetings in-district and in the capitol in 2019. Sen. Martin Sandoval (Chicago’s Southwest Side), chairman of the transportation committee, included the funding in a series of draft bills over the last several weeks.

Over the weekend, the Progressive Caucus in the State House, led by Rep. Will Guzzardi (Belmont Cragin), fought hard to make sure the biking and walking funding was included in the final package approved by the House.

Overall, it’s not a perfect bill. Active Trans pushed for 40 percent of transportation funds to go to public transit given the Chicago transit system’s current state of disrepair, and the proven economic benefits of getting more people to ride.

The bill also lacks a data-driven, performance-based planning process to allocate funds. This increases the risk it could lead to more roadway expansion projects, which have proven to increase congestion in the long run by inducing more driving. Expansion projects also lead to more traffic crashes, injuries, and fatalities, as well as more air pollution, flooding, and chronic disease due to physical inactivity.

A recent report found that many states, including Illinois, spend too much money on roadway expansion and they’re being stuck with the cost of maintaining and rebuilding those roads. From 2011-2017, Illinois added 13,411 lane miles to its road network while the state lost population. Most of this expansion is on local roads.

Legislators also passed Senate Joint Resolution 24 in the extended session over the weekend, which calls for the Illinois Department of Transportation (IDOT) to better protect people walking and bicycling on state roads. Active Trans spearheaded this resolution to demonstrate legislative support for IDOT reform, including advancing implementation of the state’s Complete Streets law and 2012 bicycle plan.