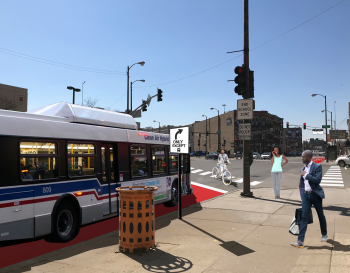 The upgrades include rush hour bus lanes on Chicago from Larrabee to Michigan Avenue — through the heart of the River North area where congestion routinely slows down packed buses traveling to the West Side. Other investments include a new cul-de-sac at the Chicago/Milwaukee/Ogden intersection and traffic signal optimization on several routes.

The initiative aims to boost bus speed and reliability, and ultimately increase ridership. Mayor Emanuel linked the program to the city’s climate goals to reduce carbon emissions and a new policy to support transit-oriented development (TOD) along bus routes. This progress is the result of increased collaboration between the Chicago Transit Authority (CTA) and Chicago Department of Transportation (CDOT).

Active Trans has advocated for immediate, low-cost investments in bus service for more than three years. Since 2012, bus ridership in Chicago has decreased by 21 percent.

Our 2017 Back on the Bus Report called for Chicago to speed up bus service by adding more dedicated bus lanes, traffic signal improvements and faster boarding. In 2018 we released Chicago’s first-ever Bus Friendly Streets Report Cards, which demonstrate how a lack of bus lanes and other bus priority features are contributing to the ridership drop, and what city leaders can do about it.

Just before we released the report cards, Mayor Emanuel announced he set aside $5 million in the Chicago Department of Transportation’s (CDOT) 2019 budget for bus service investments on Chicago Avenue and 79th Street. The city is investing those funds in the Bus Priority Zones initiative.

The Bus Priority Zones program is an exciting first step in getting Chicagoans back on the bus. Active Trans is calling on Mayor-elect Lightfoot and the new city council to expand bus priority zones and develop a plan for at least 50 miles of bus priority streets by 2023.

In her response to the Active Transportation NOW candidate questionnaire and her campaign’s transit plan, Mayor-elect Lightfoot pledged support for building a network of bus priority streets with dedicated lanes, traffic signal improvements and faster boarding.

Now it is up to bus riders and everyone in Chicago who wants a more fair, healthy and sustainable transportation network to hold Mayor-elect Lightfoot and the new city council accountable to their campaign commitments.

Take action today to show your support for better bus service in Chicago.