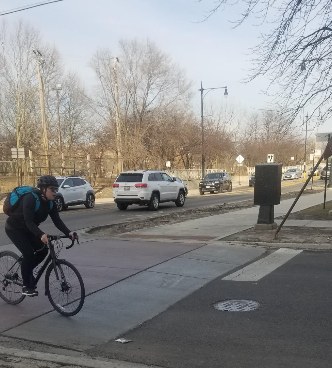 In another big step toward a continuous Chicago River Trail, the city has completed the Manor Neighborhood Greenway on the Northwest Side.

By adding these facilities, the neighborhood greenway makes it safer to travel between Horner Park to the south and Ronan Park to the north, where you can pick up the North Channel Trail. The greenway also makes it easier to walk and bike to the CTA’s Francisco Brown Line Station.

With the greenway under consideration since 2014, we’re thrilled to see another project finished that adds to a Chicago River Trail network. A complete trail would help transform areas around the river into vibrant open space and connect people to jobs, shopping districts and recreation opportunities.

Several areas along the Chicago River present challenges to connecting a continuous trail. Adding safe on-street connections like the Manor Greenway is one strategy Chicago can use to develop a comprehensive river trail system.

It’s exciting to see so much recent progress toward a Chicago River Trail.

In February, the Chicago Department of Transportation broke ground on the Lincoln Village Bridge over the North Channel Trail, which is expected to be completed this fall. At the same time, the developer Related Midwest has made significant progress on the trail at Lathrop Homes south of Diversey Avenue.

In addition to these trails, Active Trans will facilitate two community-led projects that will address trail gaps: one will develop concepts for connecting the 312 RiverRun Trail at Belmont Avenue to the trail at Lathrop Homes; the second will advance ideas for safe pedestrian and bicycle access along the Riverwalk.

To receive the latest developments on these projects as well as opportunities to get involved, please join the campaign for a continuous Chicago River Trail.