When Cook County Board President Toni Preckwinkle spoke at the Active Trans annual member meeting on December 4, her message was clear: More equitable transportation will help eliminate the health, wealth, and education disparities that exist in communities of color versus White communities in Cook County.

“Within Cook County, transportation services and the opportunities they afford are not equally distributed,” she said. “Residents and businesses of low- and moderate-income communities travel further to get to jobs and have experienced less economic growth because of historic disinvestment.”

“You may have a two-hour commute to work because the only home you can afford is in Roseland and the only job you can get is in Rosemont.”

Government, Preckwinkle said, has mistakenly focused on equality — the equal distribution of resources and creating policies that seem fair on the surface.

Instead, she said, government must approach these disparities with an equity lens.

“Equity ensures that the playing field is made level by providing resources according to need, by finding root causes of unequal outcomes, and by carefully examining and understanding that seemingly sensible policies and operations oftentimes have unintended consequences.”

Invest in Cook, a county grant program designed to fulfill the priorities laid out in the 2016 transportation plan, has awarded $23 million to advance nearly 100 projects. And nearly half of the grants have been in low- and moderate-income communities, especially African American communities in the South Suburbs, said Preckwinkle.

Better transportation needed for South Side

The Metra Electric pilot project is just one of the equity-related transportation projects the county government is pursuing. It’s also a project that Active Trans has been actively supporting and currently is asking our supporters for their help in moving it forward.

The project would provide a needed boost in public transit options in the South Suburbs by reducing fares on the Metra Electric and Rock Island lines while increasing the frequency of service. 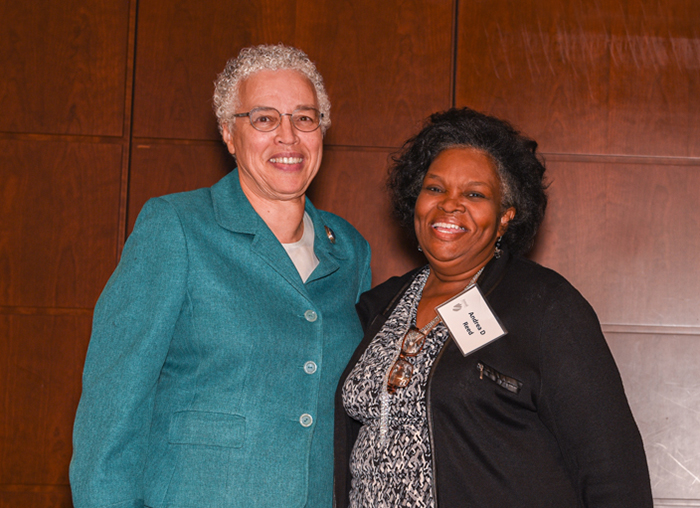 “We know that the playing field is not level when it comes to transit,” Preckwinkle said. “I knew from talking to residents in the South Suburbs that they struggled when it came to transit.”

The county, she said, is also leading the charge to create a long-awaited bridge along the Burnham Greenway Trail in the South Suburbs. This new walking and biking bridge, which has been stuck in limbo for years, will span five railroads and connect the Village of Burnham with the City of Chicago.

“By using an equity lens, we’ve been able to prioritize projects like the Burnham bridge, to ensure that communities of color have access to all modes of transit, whether it be public transit, walking, or biking,” she said.

“This isn’t work that can be achieved in a day, or a year. It requires deliberate policies that center on equity. But through this work, together we can level the playing field to make Cook County an equitable place where everyone can thrive.”
__________________
In addition to the remarks from President Preckwinkle, the evening included an awards ceremony, where the top Active Trans volunteers were recognized for all the important work they do. Check out photos of the event and award winners here.