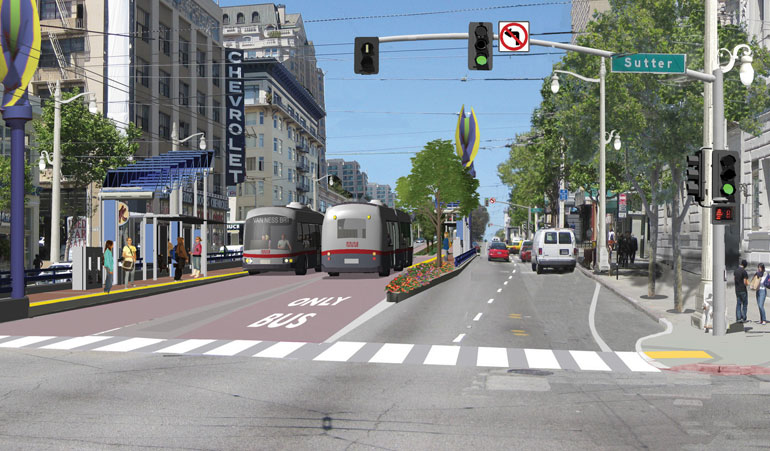 Like Chicago’s, San Francisco’s bus system for years has struggled to gain riders due to slow, unreliable service. As leaders in both cities have begun to invest in bus improvements, it’s helpful for Chicagoans to look at how San Francisco is attacking the problem.

The San Francisco Municipal Transportation Authority (SFMTA) has prioritized frequency and reliability on its most heavily used routes in launching the Muni Rapid Network.

Van Ness Ave. is a north-south arterial road that’s a continuation of Highway 101 and is often congested, making it dangerous for everyone walking, biking, and driving. The BRT project aims to make it safer for everyone along the high crash corridor while boosting bus speeds and reliability.

It will be the first BRT project in San Francisco and run for two miles along Van Ness Ave. between Lombard and Mission Streets.

There are plans to implement full BRT features such as center running bus only lanes and boarding medians, traffic signal priority and low-floor, all-door boarding. Travel times will be cut by 32 percent for the #49 and #47 buses—an estimated 1,887 hours saved per day.

The shortening of crosswalks, audible countdown signals and restricting left-turns are pedestrian safety improvements that are also part of the plan.

Like Chicago’s experience with BRT on Ashland, community residents raised issues with the project plan and the city is taking steps to address their concerns.

Some residents are against the removal of 193 mature trees to make way for center medians, while merchants wonder how construction will affect business. SFMTA plans to plant four hundred new trees and is offering assistance like grants and loans to local merchants and organizations to help with marketing during construction.

SFMTA has also committed to other street improvements along Van Ness Ave. Projects to replace century old water mains and sewer pipes, upgrade street lights and add rain gardens are planned to be done in three segments over the next three years.

Although it’s taken over a decade for the Van Ness BRT project to get going, the city is hopeful the long overdue transit and pedestrian improvements will lead to support for more BRT expansion in the city.

Van Ness Ave. is a street similar to Chicago’s Ashland Ave. where buses run slowly among a high volume of traffic. The CTA has recently taken steps to speed up its bus service by bringing back the #X9 Ashland Express, optimizing stop spacing and adding traffic signal priority to the busiest bus route in the city

With more than 10 million boardings on Ashland per year, Chicago should follow San Francisco’s example and move forward with BRT on Ashland Ave. The project would be the city’s first rapid transit line that doesn’t feed downtown and greatly boost bus speed and reliability.

This is the third post in a monthly blog series on Bus Rapid Transit (BRT) in the U.S. Learn more about our BRT organizing and contact us to get involved.