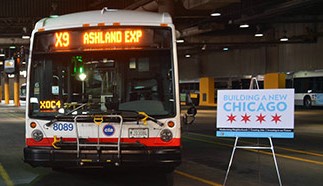 The agency announced the Ashland and Western changes in Aug., but released more specifics this week as they began a rider outreach campaign.

CTA also provided details on its plans to eliminate one-third of the current local bus stops on both corridors and add Traffic Signal Priority (TSP), which combined with express bus service will improve bus service speeds overall on Ashland and Western.

The #X9 Ashland Express and #X49 Western Express buses will stop every half-mile and at rail transfer points during the morning and evening rush.

Previously, the express buses ran all day long, but CTA chose to focus on the highest demand periods this time.

Local bus service will continue on both corridors, although starting Sunday Dec. 20, #9 Ashland and #49 Western buses will stop every quarter-mile rather than every one-eighth of a mile as they do today.

CTA says these changes will save riders up to 12 minutes in travel time.

See a map and lists of the local bus stop changes on Ashland and Western on the CTA website.

The CTA’s service standards call for stop spacing of no more than quarter-mile, and most transit agencies nationwide follow the quarter-mile standard. The agency maintained certain stops are based on high ridership and key destinations, such as schools and senior centers. (See a CTA brochure promoting the changes.)

Speeding up local bus service is a worthy goal, but that additional distance could be challenging for some riders, especially seniors and people with disabilities.

The agency welcomed rider feedback on its stop spacing proposal and consulted all aldermen along the corridors before making decisions about particular stops. We hope CTA will continue to seek out and respond to rider feedback as the changes take effect. The agency says customers will walk less than one-quarter mile or two city blocks to the nearest bus stop.

Over the next two years, CTA will also add TSP to both corridors. The technology allows buses to communicate or extend green lights when they’re falling behind schedule, saving up to five minutes in travel time.

These incremental improvements are encouraging, and CTA should take advantage of opportunities to make similar changes to other popular routes throughout the city.

The agency already has a proposal to more significantly boost bus speeds on Ashland with bus rapid transit, and should move forward with the public process to secure funding for the project.

With more than 10 million boardings annually, Ashland buses should have priority over other vehicles, many of which are carrying just one person.

Freeing buses from traffic with dedicated bus lanes and adding other BRT features could more than double current local bus speeds to about 16 miles per hour, just four miles per hour slower than the Red Line.