Back on the Bus: Create more effective ways to enforce bus lanes 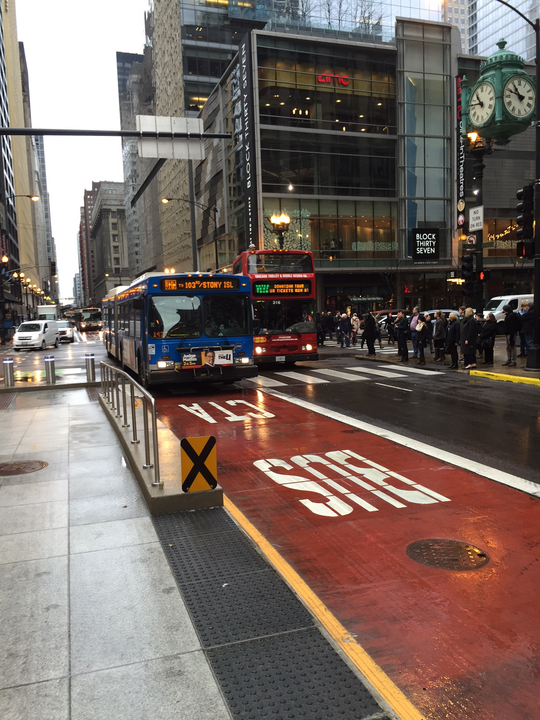 Of the paltry four miles of dedicated bus lanes that exist in Chicago, the city already struggles with keeping them clear from car traffic.

As we are calling for more bus lanes, Active Trans would also like to ensure the bus lanes are enforced so they are effective in improving bus speed and service.

Buses are slowed when lanes are used illegally for pickup and drop-off, private shuttle buses, and people using the lanes to skip ahead of other traffic or make illegal right turns.

Active Trans acknowledges that enforcement is a sensitive issue given the Chicago Police Department’s battles with systemic racism. Police enforcement would provide an additional platform for officers to unfairly target black and brown communities. We’ve written before about the need for fair enforcement, but the answer is not simple.

One option is for the city to empower non-police personnel to monitor bus lanes. Currently, only police can issue moving violations for people driving in the lane, but Chicago Department of Finance personnel can issue parking and standing violations. These same restrictions apply to bike lanes, where vehicles blocking lanes is also a persistent issue.

The city launched an effort in April 2017 to identify hotspots for blocked bike lanes and to issue citations to violators.

Chicagoans can report blocked bike lanes by calling 311 or filing an online report, where a new category was created for bike lane obstructions. The Chicago Department of Finance uses this data to identify priority areas for enforcement and have personnel on site over multiple days. A similar code should be implemented to report bus lane violations as the city invests in expanding the network of dedicated bus lanes.

Cameras could be mounted to CTA buses to capture violators and issue penalties only to people driving who are obstructing the movement of the bus.

Another consideration with enforcement is how regressive fines also disproportionately penalize low and middle-income residents. Chicago should explore alternatives like warnings, an income-based penalty structure, and restorative justice approaches to changing behavior.

Moving forward, Active Trans will work with its coalition partners, other advocates, and elected officials to explore legislative possibilities and fight for effective and equitable ways to enforce bus lanes. Join our advocacy supporter list to stay up to date on this campaign and all our advocacy work.

Creating effective and equitable ways to enforce bus lanes is one of five policy recommendations in our recently released Back on the Bus report. Read the executive summary and full report. Share the report on social media with #backonthebus. We’ll be highlighting a different policy recommendation on the blog each week through the end of the year.