Home / Blog / Back on the Bus: Create 50 new miles of dedicated bus lanes

Back on the Bus: Create 50 new miles of dedicated bus lanes 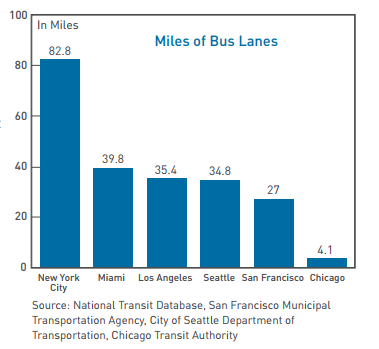 The Chicago Department of Transportation (CDOT) and the Chicago Transit Authority (CTA) should work collaboratively to create a plan for 50 new miles of bus lanes.

With only four miles of bus-only lanes, Chicago is lagging other cities across the nation when it comes to prioritizing street space for transit.

The #J14 Jeffery Jump has the longest bus-only lanes in Chicago. In 2015, CDOT and CTA debuted bus lanes as a key feature of Loop Link, connecting the transit stations in the West Loop with the central business district in the Loop.

Bus ridership will continue to decline if Chicago doesn’t invest in improving the quality of service. Creating bus-only lanes is perhaps the most obvious and beneficial way to speed up bus service. Freeing buses from traffic congestion reduces travel time and increases reliability. This investment is also relatively cheap. Often, just paint and pavement markings are required to designate bus lanes.

The longer the bus lanes, the greater the benefit. They are most needed on busy, congested corridors that serve popular destinations like job centers, schools, retail districts and healthcare services.

So why aren’t there more bus lanes in Chicago?

Critics of bus lanes cite the removal of parking as one of the biggest barriers. Beyond getting buy-in from businesses to remove parking in front of their locations, under the city’s parking meter release agreement, any removal of metered parking results in the city paying the vendor to make up for lost revenue or placing new meters at another location.

Critics also typically predict huge increases in congestion for people driving as a result of bus-only lanes, but the data shows that’s generally not the case when analyzing before and after times. On a street grid like Chicago’s, usually many alternative routes exist.

Most importantly, public buses carry exponentially more people (46 people per trip on average) than private vehicles and therefore deserve priority on our streets.

Bus lanes are a more efficient use of public space than streets filled with all general-purpose lanes that are constantly clogged with cars. Additionally, dedicated lanes have the potential to attract new and frequent riders to busy routes.

Chicago’s Complete Streets Policy identifies transit riders as second only to people walking in terms of priority modes for all transportation projects and programming. It also establishes a typology of Transit Priority Streets, which CDOT and CTA identify as corridors where transit will be prioritized ahead of other modes.

Outside of the Loop Link and Jefferey Jump corridors, the city has yet to implement this portion of the Complete Streets Policy, despite its relatively low cost. Changing this will require growing public and political will for improving bus service, which would lead to greater coordination between CTA and CDOT.

While the agencies share common goals, and have several major accomplishments in recent years, consistent coordination on improving bus mobility is still lacking. Both agencies should dedicate more resources, including staff time, to creating a plan for Transit Priority Streets and opportunities to boost bus speed and reliability – especially on high ridership routes.

With more political will and a relatively modest level of funding, the agencies could develop a plan for transit priority streets within two years that includes at least 50 miles of dedicated bus lanes.

Moving forward, Active Trans will work with its coalition partners to fight for transit priority streets and dedicated bus lanes across Chicago. Join our advocacy supporter list to stay up to date on this campaign and all our advocacy work.

Creating a plan for Transit Priority Streets with 50 miles of dedicated bus lanes is one of five policy recommendations in our recently released Back on the Bus report (read the executive summary and full report). Share the report on social media with #backonthebus.

Stay tuned as we highlight a different policy recommendation from the report on the blog each week through the end of the year.

Our suburban transit system took an important step forward recently when Pace announced a commitment to zero emission vehicles by 2040 in its strategic... Learn More