From our racing expert. Check out our new racing site!

While most cycling fans are familiar with road racing through Le Tour de France or the Giro d’Italia, there are other forms of road racing besides the point-to-point 100 plus mile events found in the Grand Tours of European cycling. 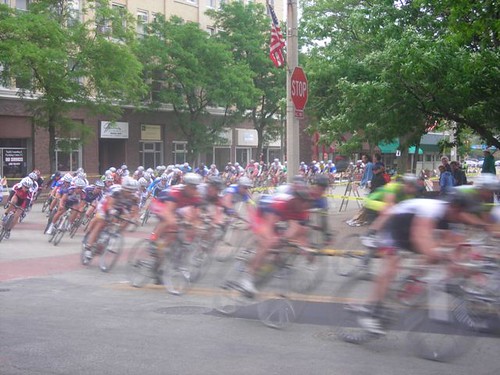 In the United States, such point-to-point road racing, especially as part of a stage race, is exceedingly rare.  The largeness of the country, the far more intrinsic car-culture, and cycling’s much smaller-following here are the reasons for this.

As such, The Criterium is the most common event experienced by American competitive cyclists.  The Criterium race format is a short loop, typically between a half-mile and a mile, on a completely closed course.  Being confined to a small, cordoned-off area, the entire event can accommodate a full-slate of racing categories, providing a full day's entertainment to racers and spectators alike.

Criteriums are raced in laps, and generally last for a predefined length of time, such as “45 minutes plus one lap.”  They can be of all shapes and terrains: completely flat or hilly, an easy circle or a technical 8-corner course which requires laser focus.  The one commonality to all criteriums is that each event is an extremely intense effort for all participants from the moment the whistle is blown until the final, all-out, eye-bulging, teeth-gritting sprint. 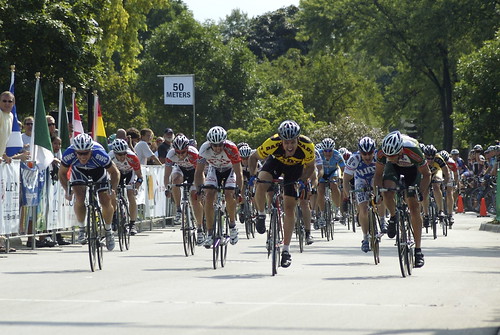 The short-lap format, and prime laps (pronounced preem – which are cash, prize, or point laps announced by a bell in the middle of a race) ensure a hot pace until the finish.

When watching a criterium, be on the lookout for large teams and solo riders alike.  Teams will be using tactics to keep a chosen rider in prime position to contest the primes or the finish, and the solo rider will be looking to take advantage of these manuveurs; which include:

The Attack – going hard off the front of the group to either get away into a break or force the group chase, spreading out the field and allowing their riders to move up, and tiring out opponents

The Leadout – towing a rider (maybe the solo opponent, inadvertently) at high speed in their draft (so he or she uses less energy) to within 300 or so meters to the line, about a far as most strong riders can keep up an all-out sprint to try and win the race.

Be sure to check the Active Trans Event Calendar for upcoming local racing events.