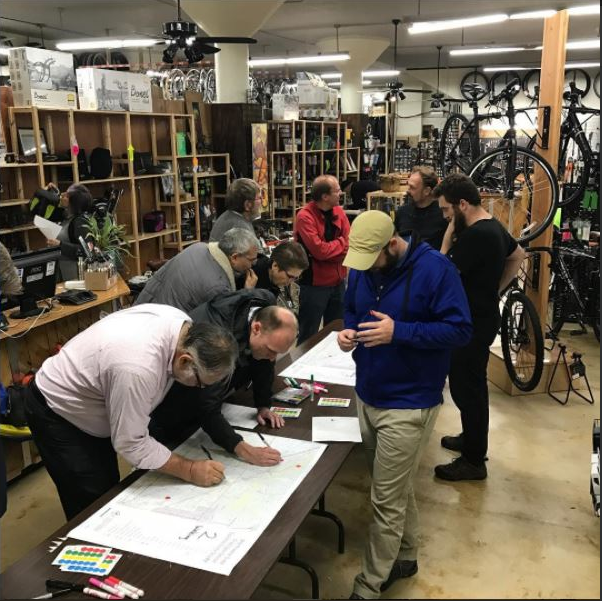 Over thirty people recently attended a community forum on biking, walking and transit conditions on the Northwest side of Chicago at Cosmic Bikes in Jefferson Park. Representatives of the North Branch Trail Alliance, the North River Commission and local residents were all in attendance.

Maps were laid out to collect both general and specific information about improvements to pedestrian facilities, bike infrastructure and transit access. The boundaries of the area covered were Peterson Avenue to the north, Kedzie Avenue to the east, Diversey Avenue to the south and Narragansett Avenue to the west.

Active Trans collected input from residents on their top priorities for improvements and will move forward to deliver recommendations to relevant aldermen alongside engaged residents.

Joe Sislow, one of the North Side community representatives of the Mayor’s Bicycle Advisory Council, helped organize the event after noticing the lack of alternative transportation infrastructure in the area. Joe commutes from Portage Park to Hyde Park by bike almost every day. While traversing the city by bike, he noticed the stark lack of bike and pedestrian friendly infrastructure west of the Kennedy Expressway.

The owners of Cosmic Bikes, Justyna Frank and Chris Stodder, tell a similar story. Previously they ran the Rapid Transit Bike Shop in Wicker Park, which has a higher density of bike lanes and transit access. (Also, Justyna Frank is a former Active Trans board member.) They noticed their customers being priced out of the neighborhood and heading northwest up to Jefferson Park. Eventually they were also priced out of the neighborhood but are thrilled to have found a new home in Jefferson Park.

General trends that emerged at the forum were bringing Divvy to the Jefferson Park area and improving west-east paths for biking over the Kennedy Expressway as well as improving pedestrian conditions around the Blue Line stops along the Expressway.

The Weber Spur was also a top priority identified by participants since it will provide a key link in connecting trails on the Northwest Side and it will improve access to the recently opened North Branch Trail extension at Gompers Park by making Foster Avenue safer to cross.

Many thanks to Cosmic Bikes for hosting us and Sweat Local for capturing the event in their dynamic video. Please watch the video recap and webseries installment below:

Please email julia@activetrans.org if you are interested in getting involved in advocacy on the Northwest side or want to work with Active Trans to improve biking, walking, and transit conditions in your part of the city.

Follow Sweat Local on Facebook to learn about upcoming events and neighborhood stories that meet at the intersection of art, culture, and community. To be notified when a new video is published, be sure to subscribe to Sweat Local on YouTube.