No accountability for driver who hit Active Trans staffer 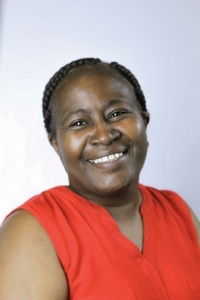 Getting struck by a driver while she was in a crosswalk in West Suburban Maywood means that Cherrell Jackson now has trouble doing one of her favorite activities — walking.

“I will be glad when I can finally walk my grandchildren to the park,” said Cherrell (pictured here). “Now I have to get into a car to go to the park. I’m a person who likes to walk, but now walking is really hard. Going more than a few blocks, the pain is too much.”

Cherrell was hit in November of 2015 on her way home from her job working as Active Trans’ office manager. While she was crossing the street, a driver barreled through a stop sign and struck her, breaking her foot in six places and breaking the lower part of her leg so severely that the bone protruded from her skin.

After the crash, Cherrell was in the hospital for 5 days undergoing multiple surgeries. In the ensuing months, she had dozens of visits with doctors and nurses, multiple rounds of physical therapy, and needed to take various medications to relieve her chronic pain.

To make a bad situation worse, the wound where the bone pierced the skin was not healing well — so even more medical visits were necessary to ward off an infection.

“I have so many scars,” she said. “My leg looked like something out of Frankenstein movie, from my knee all the way down.”

With a terrible crash like this, Cherrell said there are so many little challenges that must be overcome —many of which outside observers would never consider.

Cherrell serves as the primary caregiver to her elderly mother with dementia, and because of the crash, had to hire extra help for her mother. Being unable to pick up her grandkids has been a great loss, and the list goes on.

Thankfully, Cherrell has experienced strong support from her friends, family, her workplace and her church. “I can’t imagine how people would deal with something like this without lots of support around them,” she said.

Because it was so hard for her to get around, Cherrell wasn’t able to come to the office to work at Active Trans for a period of 7 months, and worked from home for much of that time.

Cherrell is still struck with disbelief by the lack of accountability for the driver who hit her. “He did not even get a ticket,” she said. “Pedestrians supposedly have the right of way. But the driver said I jumped out in front of him, and police said it was my word against his.”

The way the laws work, said Cherrell, “drivers can run you down in the streets with no fear of consequences. His insurance might have gone up, so it affected his life in a small way, but it’s affected mine in profound ways. He should be doing community service in a hospital with crash victims or working in a morgue. But instead, the experience is over for him. What if he hits someone else in the future?”

In addition to working through the physical trauma, Cherrell said it’s been a challenge to work through the anger and mental distress.

Until she started seeing a therapist, Cherrell said she was embarrassed to admit her fear of crossing a street. “Every time I cross the street, I think about this guy,” she said. “I’m afraid. I keep looking for drivers.”

Did you know that Active Trans offers the Crash Support Hotline for people who have been in a crash? To ensure that biking and walking crash victims have the guidance and information they need, Active Trans trains volunteers who can answer questions and provide resources to people. Call 312.869.HELP if you’ve been in a crash.