On Monday, October 8, the Chicago Tribune ran a story by Dawn Turner Trice featuring a personal profile of Active Trans staff member Cynthia Bell. This article tells the fascinating story of how Cynthia became involved in the community outreach work she does here at Active Trans, so we just had to share it with our readers.

The Cynthia Bell of today is a passionate cyclist who puts on her helmet and rides from her North Lawndale home to her job in downtown Chicago. Sometimes during the day she even rides to far-flung neighborhoods for appointments.

The Cynthia Bell of a few years ago was a sedentary person who could hardly read a street map—and wouldn't have been nearly as heartbroken about the Friday morning death of bicyclist Neill Townsend, who was killed while riding to work. 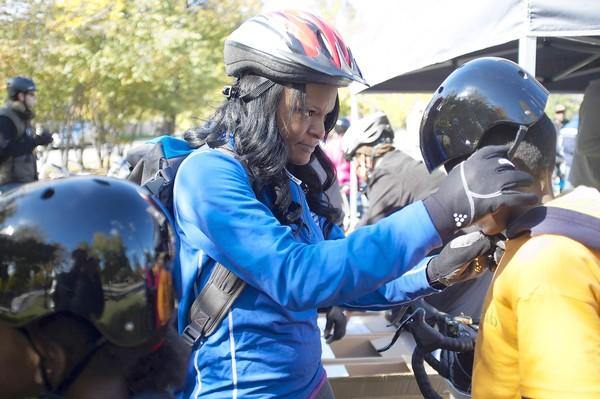 I certainly would have thought it was sad, but I wouldn't have understood it from this perspective, said Bell, 24, a community liaison with the Active Transportation Alliance. Now that I'm in the cycling world I want to know what happened and how it could have been prevented.

In keeping with the alliance's mission to make biking and walking safer, she works with community-based organizations and aldermen to promote riding bikes as a mode of transportation and walking in underserved and tough neighborhoods.

So, how did Bell arrive at where she is today?

She said that as a child, her mother was quite protective and didn't want her young children hanging out in North Lawndale.

She didn't trust it because of the high crime and drug selling, Bell said. So our pattern was church then home, school then home and over and over.

Back then, she did own a bike. It was a gray and orange Mongoose BMX that she pedaled around in circles on the concrete portion of her tiny backyard, which, as you might have guessed, was fenced in.

As a teen, the circumference around which Bell could roam grew a bit, and she started dating and going to house parties, sometimes hanging out with the wrong crowd. She was an A and B student while a junior at Orr Academy High School when she got pregnant. In August 2004, she had a son.

And he was 17 months old when she heard about an after-school bike program at Orr. At the time, the draw for her was that it offered a stipend.

My thinking was, 'I have a baby, and I need a couple of extra bucks,' she said. Then I heard we'd be building our own bikes from scratch, and I'm a hands-on person, and I like seeing the finished product. I thought: 'I'll be able to brag to my family.'

The frames were donated from an organization that rescues bikes headed for landfills. But the other bike components were new. So, she built her mountain bike. Then she rode it with her classmates, around her community and around the city.

Before this, Bell's world was small. When she thought of the North Side, her imagination took her to North Avenue and stopped. To her, the South Side began and dropped off around Roosevelt Road.

I had never really traveled to other neighborhoods, and now we were riding to the lakefront and Logan Square and Englewood, she said. For me to travel and see the buildings and the scenery, I was fascinated like a little kid. I just kept saying, 'Wow!'

Although Bell worried about whether she had the endurance for a long ride, she learned she did and was good at it. She became skilled at using maps and figuring out how to flow with traffic.

Since then, she's been spreading the word.

I've gone to community meetings, and people have said, 'Right now we've got crime on our plate,' she said. I understand that. But when is a good time? Yes, they may have to be smart about certain streets. But it's great exercise and great for the environment. And, I've saved a ton of money by biking.

Indeed, cyclists in tougher communities have to worry about universal concerns such as avoiding car doors opened in their path and vehicles that hog space. But many of the neighborhoods that Bell visits don't even have bike shops, or protected bike lanes.

When Bell initially goes to a community, she conducts an hourlong workshop to determine barriers to walking and biking. She brings along crash data to let people know the area's trouble spots. She finds out whether residents regularly drive their cars or ride public transportation.

And then she walks around the community trying to answer a list of questions: Do residents have enough time to cross the street? Is the crosswalk painted or paved properly? Are the sidewalks smooth or crumbling? Are there vacant lots or abandoned buildings?

She takes all of the information downtown to the alliance's urban planner, who comes up with recommendations and a call to action.

Bell said the most important part of her job is to build and maintain relationships with communities. She said whenever there's a crash and a cyclist is injured or killed, she works even harder to push for protective bike lanes and other ways to keep bikers safe.

About a year ago, she got rid of the mountain bike she built in high school and traded up to a hybrid. She's in community college and eventually wants to transfer to the University of Illinois at Chicago to study urban planning. She said her son, now 8, sometimes bikes with her, riding on the sidewalk.

To be honest, I don't know where I would have been without this job and cycling, she said. I look at my friends and what they're up to, and they're not living a pleasant life. I feel so free.