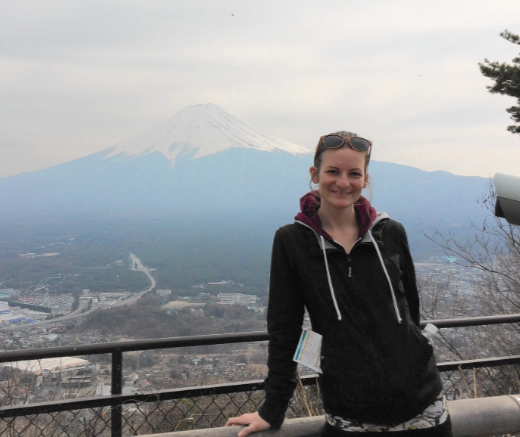 Dee Palagi knows she has an uphill battle ahead in the next year. After being struck by a semi truck while bicycling, the 26-year-old West Town resident is still recovering from the severe injuries she sustained, including having her leg amputated.

But she is ready to tackle the long and grueling recovery process with tenacity and optimism in order to walk and cycle again. She’s also speaking up with the hope of preventing horrible crashes like the one she endured.

“I’m extremely strong, and I’ve always had a positive attitude about all of this,” says Palagi, a special education teacher. “I’m going to get through all of this and walk again and get my life back.”

On Sept. 23, 2016, Palagi was bicycling home from Easterseals Academy Chicago, where she works, at 2:15 p.m. A semi truck turned in front of her without signaling and hit her at the intersection of West Roosevelt Road and South Wood Street in the Illinois Medical District in Chicago.

The trailer knocked her down and pinned her foot under one of the tires.

Palagi was rushed to Stroger Hospital, where she stayed for two months and endured eight surgeries. The doctors amputated her right leg below the knee. She also suffered a fractured pelvis, which required metal rods, and a broken arm. In addition, she was treated for severe road rash on her right thigh.

After Palagi getting released from the hospital on Nov. 18, 2016, she’s been attending physical and occupational therapy sessions at the Rehabilitation Institute of Chicago twice a week. She expects to be in therapy for at least a year as she builds her strength and learns to walk.

After learning to walk proficiently with crutches, she will learn how to walk with a prosthetic leg.

While her therapy has been going well, Palagi has discovered simple tasks and errands are more difficult to carry out when walking on crutches. For example, to carry clothes from one room to the next, she has to place them in a backpack and then walk to the next room with the bag on her back. When she runs errands or goes to work, she needs someone to drive her because she can’t walk far or stand too long because she experiences nerve pain in her leg and her pelvic bone still aches.

“Going back to your normal life is the hardest part,” Palagi says. “I have to learn how to do everything over again in a new body. This my new norm.”

As she recovers and learns to walk again, Palagi wants to share her story and ideas about how to prevent collisions between trucks and cyclists. She hopes Chicago’s new Vision Zero plan will require side guards to be installed on commercial vehicles and large trucks. They help keep pedestrians and cyclists who are struck by large vehicles from going under the vehicle.

She also wants the plan to strengthen commercial driver licensing programs and driver education. In addition, Palagi would like to see more protected bike lanes installed in the city.

“I feel very lucky. I won’t have that leg ever again, but I’ll be able to have a prosthetic that will take me back to where I was before the collision,” Palagi says. “Most people die in commercial vehicle crashes like my situation. I think it’s important that I speak up for them and get involved.”