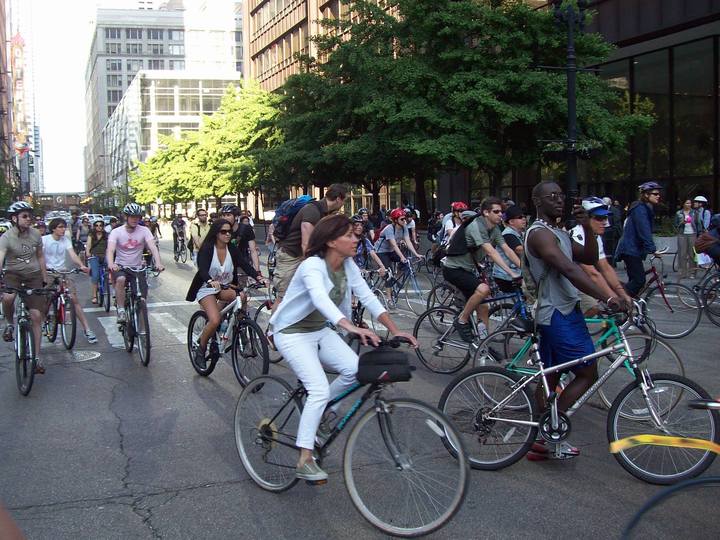 When Chicago’s Critical Mass started 20 years ago, cycling in Chicago was a different experience.

There were few bike lanes, not nearly as many riders and rare opportunities for riders to get together and meet.

Active Trans, then known as the Chicagoland Bicycle Federation, was 10 years old and knee-deep in the effort to bring more than 4,000 bike parking racks to Chicago.

For those who haven’t experienced a Critical Mass ride, think of it as a rolling celebration open to anyone on a bike.

Since starting in the early 1990s in San Francisco, Critical Mass rides have spread throughout the United States and to some 300 cities around the world.

During warm weather, thousands of people often attend the Chicago rides, which are held on the last Friday of every month, starting in Daley Plaza at 5:30 p.m.

Chicago Critical Mass has influenced biking in Chicago more than you might think. Over the years, it’s played an important role in nurturing and building the Chicago bicycling community.

It’s inspired an annual art show, a long-running zine and countless spinoff rides. There have been rides focused on holidays, rides that serve as memorials to people killed in traffic violence, rides that highlight Chicago history and countless other topics.

Over the years, we’ve seen Chicago Critical Mass play a major role in getting more people involved in the fight for safer streets.

Once participants get a taste of the two-wheeled comradery that goes with the event and the feeling of riding city streets without being fearful of car traffic, people naturally wanted to get involved in making biking better in Chicago.