Home / Blog / Top stories in sustainable transportation from the past year

Top stories in sustainable transportation from the past year 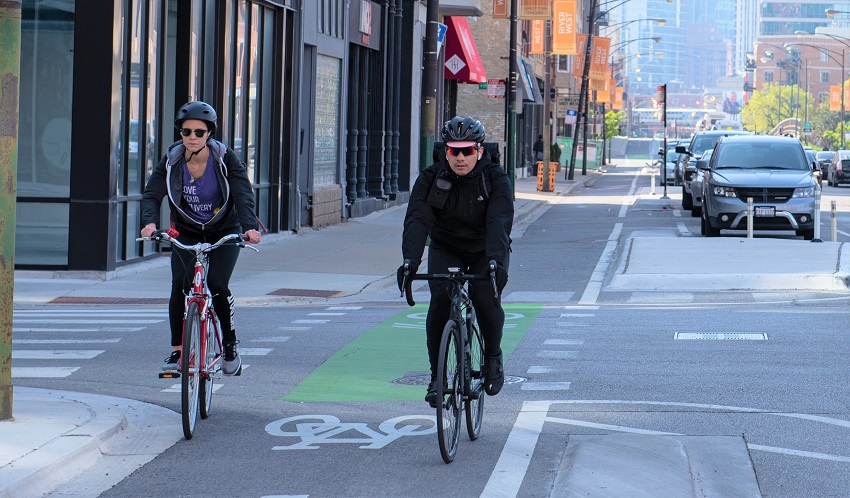 One fact weighs heavily on the mind while recounting the past year of walking, biking, and transit in Chicagoland.

The lack of safe infrastructure for all road users resulted in the tragic loss of life in 2022. This summer alone, motorists struck and killed at least seven Chicagoland children on foot, scooters, and bikes.

After two young children were killed by drivers on Chicago’s North Side over the summer, more than 300 people took to the streets. The memorial event — held for Raphael “Rafi” Cardenas and Elizabeth “Lily” Grace Shambrook — brought together people who were demanding that the city take action to make our streets safe places to walk and bike.

The event showed how neighbors are ready to come together with community groups and advocacy organizations like Better Streets Chicago, Chicago Family Biking, and Bike Grid Now. These tragedies and the resulting event prompted plenty of media coverage and new legislation that increases penalties for drivers endangering the lives of people biking by parking in bike lanes.

This wellspring of grassroots activity felt like a new moment for sustainable transportation in Chicago as local leaders and mainstream media outlets sat up and took notice. A movement that was once small and mighty seemed to be growing into a force to be reckoned with.

What else happened in the past year?

Let’s take a quick look at some of most important moments in sustainable transportation in Chicagoland during 2022.

In July, a majority of alderpeople defeated a measure that would have raised the threshold for speed camera ticketing, making it legal to travel 10 mph above the speed limit near parks and schools. Raising the ticketing threshold seemed especially misguided given the traffic safety crisis occurring on our streets.

Speeding is the most common factor in serious and fatal crashes. Even small reductions in speed — just five miles per hour — greatly increase the likelihood of a victim surviving a crash.

The measure was defeated thanks to a collective effort of advocates from several local groups. Better Streets Chicago, Streetsblog Chicago, Bike Lane Uprising, and Active Transportation Alliance all played a role in this success.

Another piece of good news is that the city has approximately doubled the number of miles of bike lanes that are protected. While there weren’t many miles of these bike lanes to begin with, the progress should be commended — while keeping in mind that we have much farther to go before we have a functional network of protected bike lanes serving the entire city.

Sadly, leadership at our regional planning agency approved plans to add nearly 300 lane miles to our region’s roadways. This step in the wrong direction was taken despite the widespread understanding that expanding roads does not fulfill its promise of relieving congestion and despite hundreds of people speaking out against this series of road expansion projects because they would only worsen climate change, safety, and transportation equity.

While our regional planning organization, the Chicago Metropolitan Agency for Planning, ultimately gave the green light to the projects, they did however commit to integrating meaningful greenhouse-gas-reduction-related metrics in their future assessments. 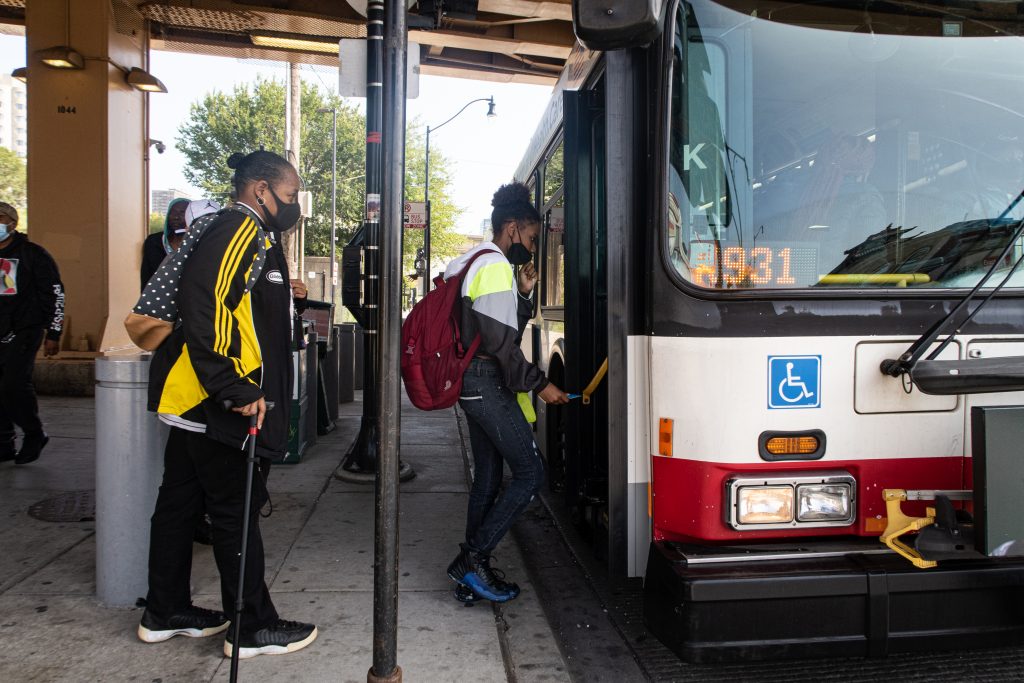 Chicago City Council passed legislation that will promote more development near transit within the city’s South and West Side neighborhoods and improve safety for pedestrians and other road users.

Among its benefits will be reducing parking minimums, increasing density/height limits near transit (including bus lines), and increasing affordable and accessible housing options.

Active Transportation Alliance has been a partner on this initiative for a number of years and stepped up our advocacy efforts to help get the ordinance across the finish line.

A key hurdle was cleared in December for bringing high-quality rapid transit to Chicago’s far South Side when Chicago City Council approved a “transit TIF” for extending the Red Line.

Once completed, Chicago’s major north-south L line will extend to the southernmost neighborhoods and fulfill a decades-old promise. The 5.6-mile extension will begin at 95th Street and head south to 130th Street, hitting four new stations along the way. 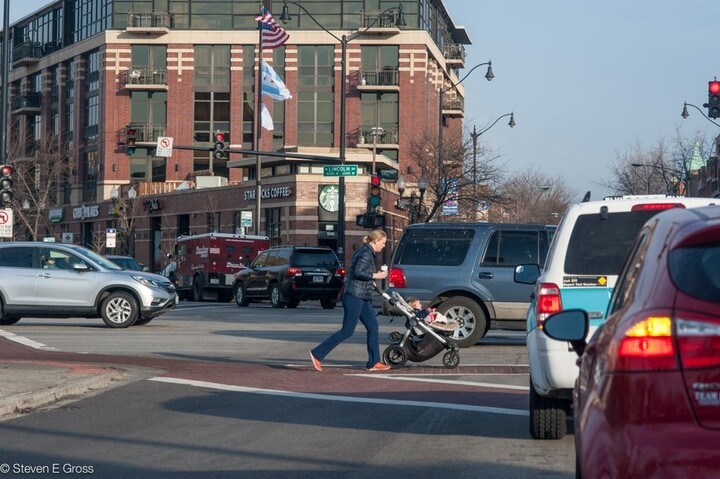 RECORD ITEP FUNDING FROM THE STATE

One of the most important state funding sources for walking and biking improvements awarded its largest annual amount ever in 2022.

The funding source — called the Illinois Transportation Enhancement Program (ITEP), which is administered by the Illinois Department of Transportation (IDOT) — dedicated $125 million for eligible projects like biking and walking paths, trails, streetscape beautification work, and other improvements.

The increase is the result of a statewide campaign led by Active Transportation Alliance during the 2018 election cycle and helped along by supporters.

CTA CALLED UPON TO DO BETTER

As most transit riders in Chicago know, our transit system has serious reliability problems. There is little transparency and accountability from the agency and making matters worse is a faulty bus and train tracking system.

It was an important coalition effort that resulted in significant media coverage and visibility for improving our ailing transit system.

Moreover, thanks to an ordinance introduced by 40th Ward Alderperson Andre Vasquez, the president of CTA is now required to appear regularly in city council meetings.

Chicago’s century-and-a-half-old policy that requires residents, business owners, and property managers to keep their sidewalks clear of snow has been a failure, especially for the most vulnerable people. Some blocks are appropriately shoveled while others remain impassable under layers of snow and ice.

Bearing the brunt of this ineffective policy are older adults, children, people with disabilities, and people who can’t afford a car or choose not to own one.

Our friends at Better Streets Chicago and Access Living have been making a powerful case for the economic, safety, and environmental benefits that universal snow removal can bring to our city.

Already, the campaign has 10 alderpeople supporting the effort, and the team is working hard now to secure $750,000 for a pilot project to show how a citywide program could work. 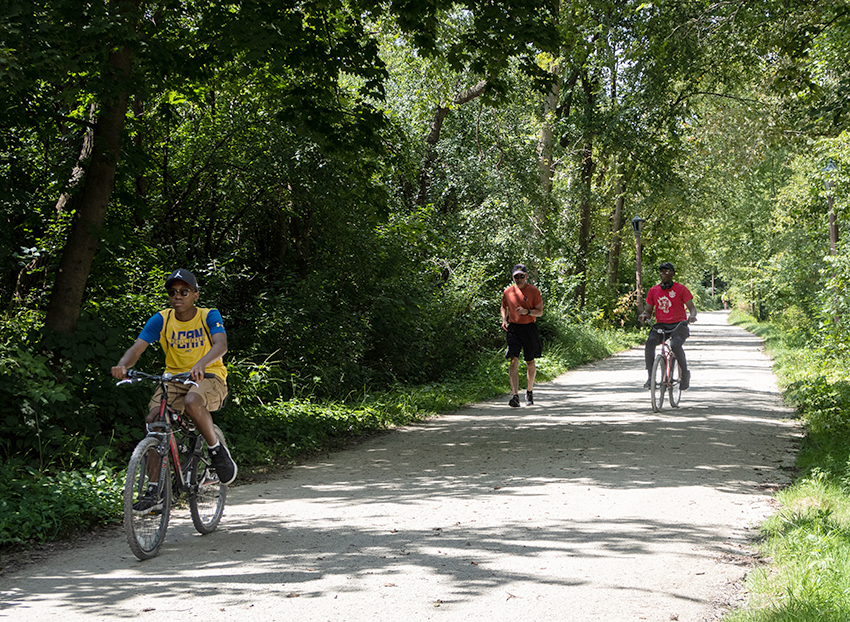 We were pleased when the city of Chicago release a citywide vision map for trails, which aims to add 48 miles of new trails to an existing 79-mile network.

Several South Side trail projects made important progress this year:

We’re also thrilled to be working with advocates leading trail development work on the ground on projects like the East Branch DuPage River Trail and extending the North Channel Trail in Evanston and extending the Old Plank Road Trail to the Pennsy Greenway.