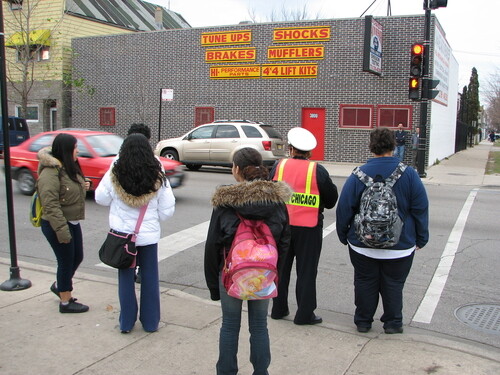 Thank you to the aldermen who voted to reject efforts to raise the threshold for automated speed enforcement, which would have enabled dangerous speeding and put vulnerable roadway users at risk.

On July 20, a majority of aldermen defeated a measure that would have raised the threshold for speed camera ticketing, making it legal to travel 10 mph above the speed limit near parks and schools — during a time when there’s been a traffic safety crisis on our streets.

Speeding is the most common factor in serious and fatal crashes. Even small reductions in speed — just five miles per hour — greatly increase the likelihood of a victim surviving a crash.

The epidemic of speeding on our streets is taking a rising toll on the lives of Chicagoans, one that disproportionately impacts Black and Brown residents on the South and West Sides.

Speed cameras are an effective intervention that can address unsafe driving. Raising the threshold would have led to real harm in our communities.

But let’s keep in mind that as long as we are only talking about speed cameras, we’re missing the forest for the trees.

Chicagoans deserve a comprehensive public process to address the traffic safety crisis facing our neighborhoods, one that puts safety and racial equity at the center of the conversation as we consider solutions.

Let’s talk about how to make speed cameras obsolete by redesigning and rebuilding our roadways so they eliminate speeding and every street is safe for people walking, biking, and driving.

Thank you to our supporters and other local advocates like Better Streets Chicago, Streetsblog Chicago, and Bike Lane Uprising, among others for helping defeat this measure. Once again, your advocacy efforts paid off.