There were plenty of attention-grabbing developments among the top active transportation stories of 2018.

Some of these developments helped make our streets safer and more inviting for people using active transportation, while others were intended to give more people access to better transportation options.

Here they are. If we missed an important story, please let us know in the comments below.

1. Lakefront Trail separation. After decades of trail advocacy by Active Trans and our community partners, we were thrilled to see the completion of the project to create separate foot and biking paths along the Lakefront Trail. Work began in August 2016 on select sections and then last year, local hedge fund manager Ken Griffin donated $12 million to the create trail separation for the remainder of the path.

3. New state bike and walking safety laws. Thanks to the efforts of Active Trans and our partners, biking and walking will be safer in Illinois. The Bike Walk Education in Schools Act requires K-8 public schools to provide biking and walking safety education. And in other legislation, the “Dutch Reach” method was added to Illinois’ Rules of the Road manual and related bike safety questions will now appear on the state driver’s license exam (see bottom image). 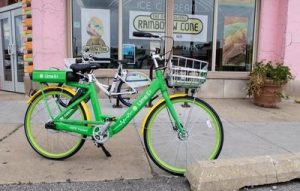 5. Bike Lane Uprising takes off. Cyclists from 60 cities have contributed to the Chicago-based Bike Lane Uprising, a website that allows people to report bike lane obstructions by posting photos and factual details on a map. Launched in August 2017, during the past year the website has garnered loads of favorable media coverage and a surge of new users.

6. Bus Friendly Streets Report Cards. Active Trans released Chicago’s first-ever Bus Friendly Streets Report Cards, which shows bus speed and reliability on the decline because buses routinely get stuck in traffic and at red lights. Active Trans developed the report cards for all 50 Chicago wards and eight of the city’s high-ridership routes using publicly available bus tracker data from the Chicago Transit Authority. The report cards are already being used by advocates campaigning for better bus service in their wards.

7. Route picked for Red Line extension. Planning for the long-promised southern extension of the Red Line to 130th Street took a step forward this year when the city chose a preferred route. The project, decades in the making, will serve people on the Far South Side who have been living in a transit desert with limited access to jobs, healthcare, recreation, educational opportunities and other critical services. The proposed 5.3-mile extension would include four new stations near 103rd Street, 111th Street, Michigan Avenue and 130th Street.

8. Walk and Roll the Vote/Mayor Emanuel not running for reelection. Before the gubernatorial primary election this past year, Active Trans released a 2018 Sustainable Transportation Voter Guide  so constituents could learn about the views of candidates for governor on transit, walking and biking issues. We also released a state platform that called on leaders to establish a new Bike-Walk Fund in the state’s annual budget; increasing state support for public transit operations and capital projects; and reforming Illinois Department of Transportation policies to support building better biking and walking facilities on state routes. Under Mayor Emanuel’s leadership, Chicago strengthened its commitment to building safer streets  that make it easier to get around without a car. To ensure that our next mayor makes biking, walking and transit a priority, our Walk and Roll the Vote campaign is already educating candidates and voters in the 2019 elections about Chicago’s most pressing transportation needs. 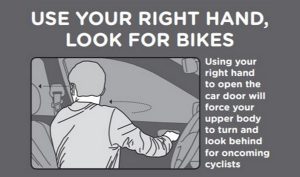 10. The most important part of the Navy Pier Flyover opens. Thanks to the partial opening of one the most talked about infrastructure projects in Chicago, people on the trail can avoid the most dangerous, confusing part of the Lakefront Trail. And it moves the project one step closer to full completion in 2019 when the flyover bridge  will extend further south across the Chicago River.