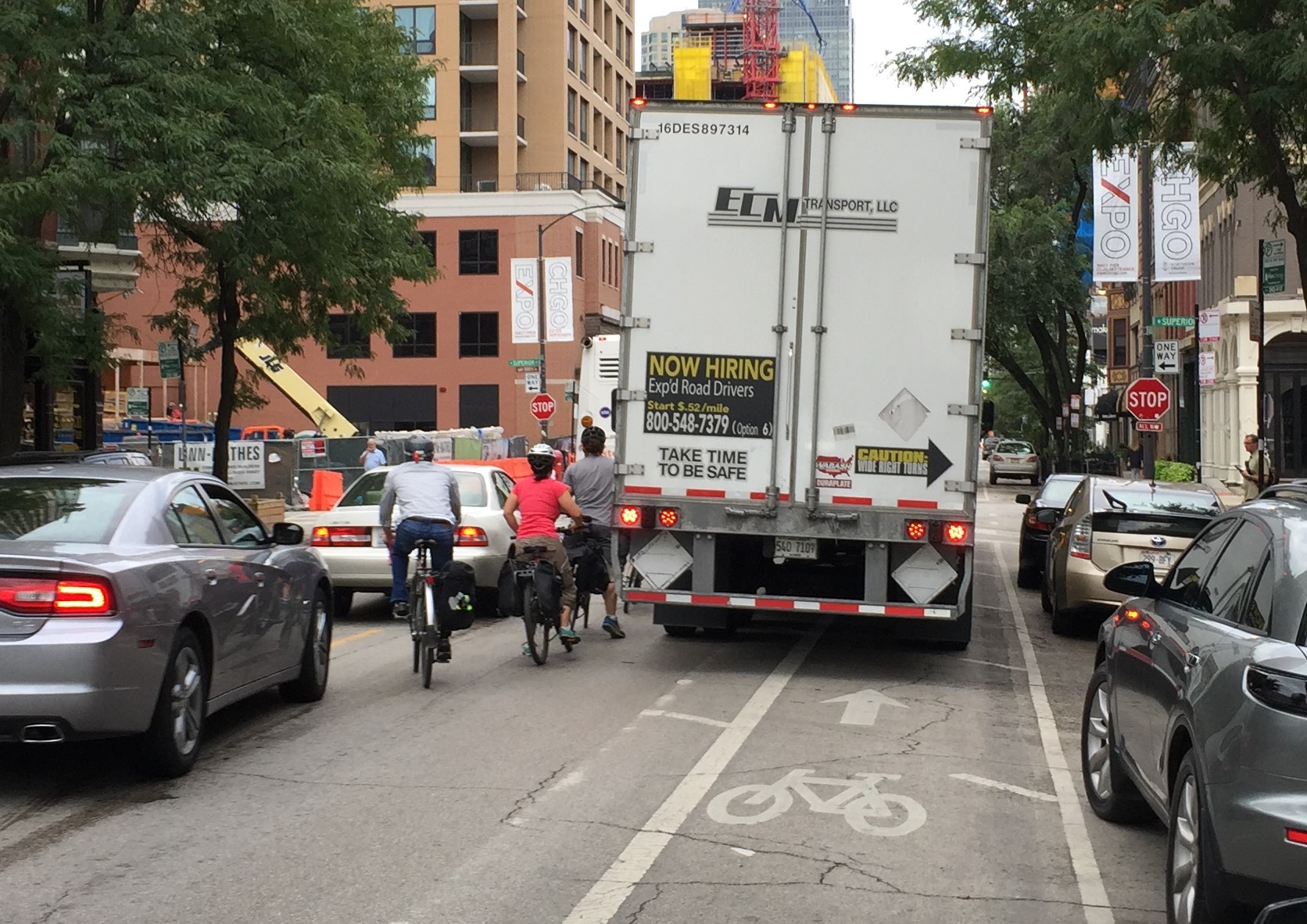 The new bicycling infrastructure taking root in Chicago has done much for the city’s reputation as a great place for biking. Building on that reputation is getting named by Bicycling magazine as the best US city for bicycling in 2016. But there is a major problem that has been cutting into this status — and it’s not a minor issue: drivers parking in bike lanes. This widespread phenomenon is not only inconvenient, it’s dangerous.

When they witness cars parked or driving in a bike lane, they take photos of the incidents and upload them to the website. Then they answer a few questions about those violations, such as when and where they occurred; the photos and details of each incident are posted on the website and marked on a map of Chicago, aggregating the data to indicate where the trouble spots are.

Bike Lane Uprising is a passion project for Whitehouse. She created the website after a truck nearly struck her while she rode her bicycle in 2016. When she stopped at a red light, a truck made a sharp right turn, driving into the bike lane and onto the sidewalk. It was dangerous and terrifying. Luckily, Whitehouse didn’t get hurt.

But the incident opened her eyes to the dangers of cars driving and parking in bike lanes and how to hold offenders accountable — a problematic issue Active Trans has also been working on, most notably with our Clear the Way campaign, which urged people to report vehicles illegally blocking bike lanes, sidewalks or trails in Chicago.

Whitehouse contacted the company that owns the truck several times, but her complaint fell on deaf ears, she says. Over the course of the next year, she researched how to best report these violations so that law enforcement would find and ticket offenders. She discovered that Chicago’s 311 website is cumbersome to use and didn’t ask relevant information about the incidents. Other options proved to be unsatisfactory to her as well.

“I noticed that all of the avenues to even acknowledge that cars are in bike lanes were just very hard to do. The processes for recording the incidents are very fragmented,” Whitehouse says. “You can’t actually report it on the scene. It’s often not a situation that you would want to call the police while you’re biking. You don’t want to stop exactly what you’re doing and have the police come out to the scene because often times they’re gone by then — the person parking in the bike lane. Afterward, it’s too difficult.”

Since Whitehouse launched Bike Lane Uprising in August 2017, the website has received more than 2,000 submissions of bike lane obstructions. But not all of those submissions are for Chicago. Now there are eight other cities are participating, including New York City, Washington DC and Toronto. For three of the cities — Chicago, Washington DC and Nashville — enough data has been collected so that heat maps can be generated, indicating where the most problems are.

Whitehouse is pleased that progress has been made with some repeat offenders that have been reported to the website. For example, after several users identified Buona Beef cars parked in the same bike lane five times, Whitehouse contacted the company to explain that its drivers were illegally parking in those bike lanes.

Buona Beef initially responded graciously, apologizing for the offense and saying that its drivers would not park in those lanes again. But the following day, Bike Lane Uprising users found that the company’s drivers were still parking in bike lanes. Whitehouse contacted the company again about the violations. They issued another apology and assured Whitehouse it wouldn’t happen again. Whitehouse said Buona Beef has stuck by its word, and the company even catered Bike Lane Uprising’s event at MB Bike the Drive as part of the apology.

“As an owner of a company, especially if it’s one that involves having a fleet of vehicles, you don’t always know what those drivers are doing when they don’t have oversight from the company,” Whitehouse says. “We have had some fabulous responses from companies. Buona Beef was one in particular. They were very apologetic. It seemed incredibly genuine.”

Whitehouse’s hope is to see various city agencies, including 311 and the Chicago Department of Transportation, using the data from Bike Lane Uprising to keep cars away from the bike lanes, while ticketing offenders and holding them accountable. While Whitehouse knows it may take some time to establish a working relationship with the city, she is pleased with how the Bike Lane Uprising website has resonated with the bicycling community in a short period of time.

“Honestly, all of it has surpassed my expectations. It’s grown much faster than I could have anticipated,” she says. “Connecting cyclists with this one common platform — it’s allowing us to have a stronger, louder collective voice.”