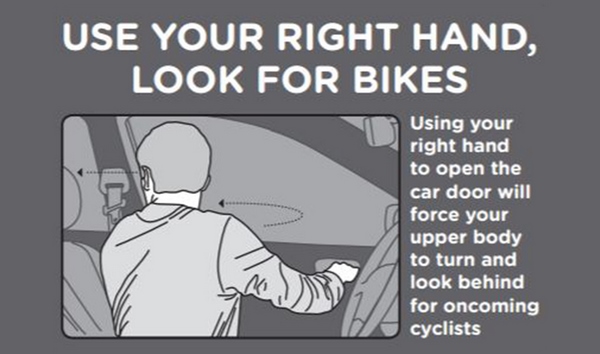 A bill that adds the Dutch Reach method to Illinois’ Rules of the Road manual and adds bike safety questions to the state driver’s license exam has been signed into law.

The bill (House Bill 5143), led by State Rep. Theresa Mah (2nd District, Chinatown), was co-sponsored by a bipartisan group of 20 legislators and passed both houses with strong, bipartisan majorities. Governor Rauner signed the bill into law on Friday.

Rep. Mah approached Active Trans in 2017 about working together on an Illinois bill after similar legislation passed in Massachusetts. Active Trans helped draft the bill in Springfield, and then we generated hundreds of constituent letters in support of the bill to state representatives, senators and Governor Rauner.

Getting doored is never too far from the mind of people riding bikes in the Chicago region. This law is a good step towards reforming state policy to better reflect the needs and safety of all road users.

Illinois Department of Transportation (IDOT) data shows dooring crashes are on the rise across the state, especially in urban areas. In 2015, there were more than 300 reported dooring crashes in Chicago alone – a 50 percent increase over the previous year.

For months, our statewide partners at Ride Illinois worked collaboratively with the Illinois Secretary of State on revamping the road manual’s and exam’s bicycle safety content for people driving and biking, including adding the Dutch Reach.

Another safety bill (House Bill 4799) that would make biking and walking education a requirement in Illinois schools is currently being reviewed by Governor Rauner. The Bike Walk Education in Schools Act clarifies the existing traffic safety K-8 school curriculum requirement to specifically include biking and walking safety. Illinois crash data shows nearly five children are hit by drivers every day while walking or biking within one block of a school. The bill passed both houses with strong, bipartisan majorities.