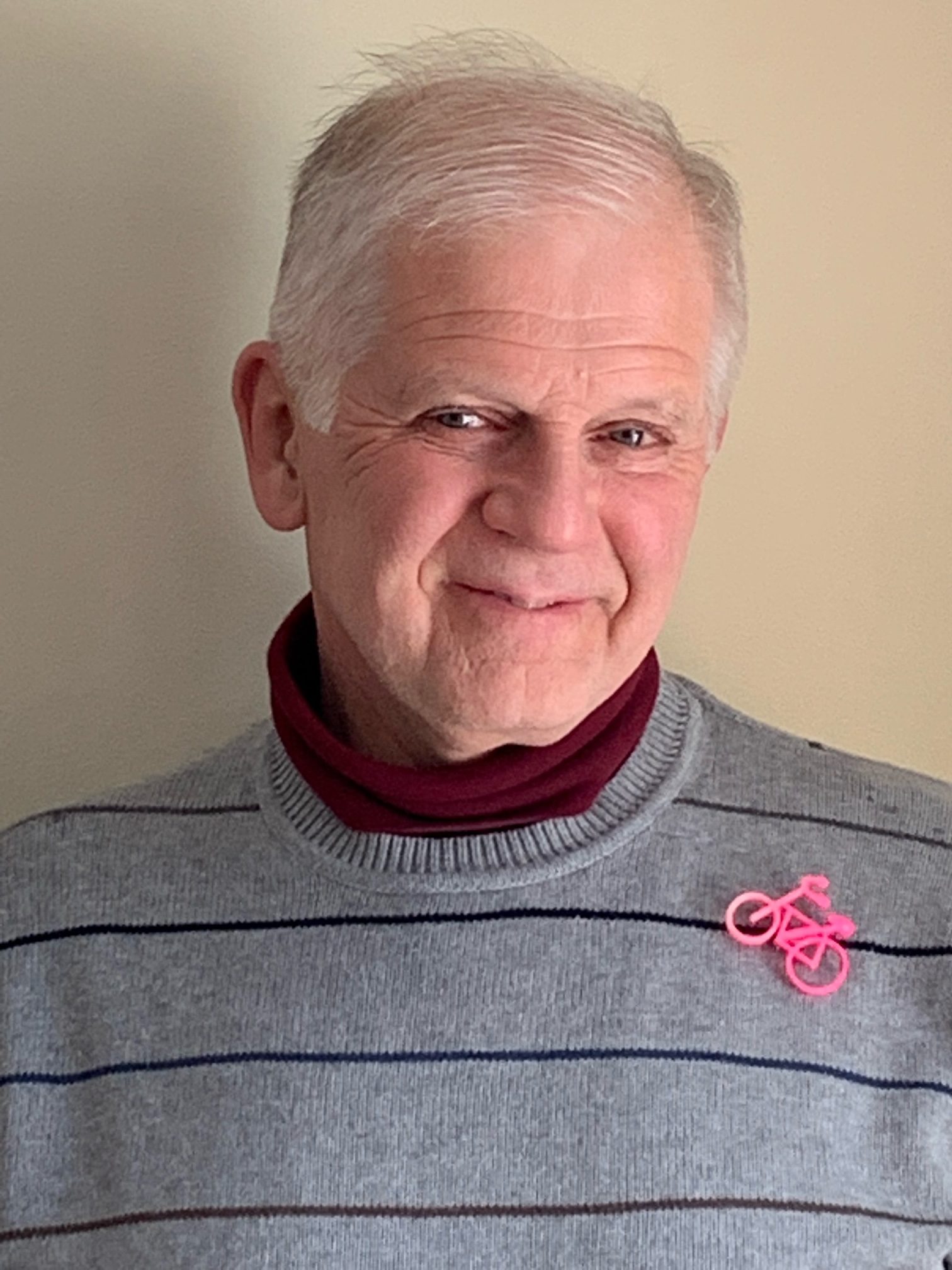 Renowned novelist F. Scott Fitzgerald once wrote, “There are no second acts in American lives.” Ralph Banasiak is proving him wrong. The retired math teacher is staging his second act as a bicycling advocate.

As a bicycling columnist and an active member of the Bike Palatine Club, Banasiak is working to make bicycling safe and encourage more people to take up cycling — earning him the Public Service Award from the Active Transportation Alliance.

Even before he retired in 2018, Banasiak has long championed bicycling in Palatine, the suburb northwest of Chicago where he lives.

It all started in 2008 when Banasiak, an avid bicyclist, was recruited to join the Greater Palatine Bicycle Task Force, which consisted of a volunteer group of residents who sought to improve bicycling safety. The task force’s activities included working with the Village of Palatine to develop the community’s bicycling plan.

In 2012, the group transitioned into the Bike Palatine Club, a nonprofit dedicated to creating a bicycle friendly environment in the village.

THE POWER OF COLLABORATION

Banasiak has played an active role in the Bike Palatine Club since it was founded. He served as the group’s treasurer and membership coordinator, he’s overseen its newsletter and blog, and he helps organize and lead group bike rides.

In addition, he sets up educational events at the local library that feature cyclists and experts sharing their unique cycling experiences, such as cross-country rides, and safety tips, including what to wear for winter cycling and how to operate an e-bike safely.

Banasiak also enjoys helping to organize the club’s programs that educate kids and adults about bike maintenance and safety. He appreciates how these clinics bring the community together and leverages the power of collaboration — no easy feat for an all-volunteer bike club with limited resources and political capital.

Banasiak is particularly proud of one clinic in 2019 in which the club collaborated with the social services agency Palatine Partners for Our Communities Center, Palatine Park District, Palatine Police Department, and Community Consolidated School District 15 to put together a bike maintenance workshop for low-income students in Palatine.

Club volunteers worked directly with the students, demonstrating tasks such as how to clean their bikes, check tire pressure, and test brakes and lube chains, while chatting to them about bike safety. The event included a raffle for 10 bike helmets.

“I’m proud of it because collaborating with the [Palatine Partners for Our Communities Center], an established Palatine agency, maximized our small bike club’s impact in the community,” Banasiak says. “It affirmed my belief that coordinating with established institutions is key to successful projects.”

In addition to working with the Bike Palatine Club and writing the occasional guest post for the Active Trans blog, Banasiak has been writing the cycling column “Along for the Ride,” which is published every two weeks in the Daily Herald, a daily newspaper that is distributed in the northern, northwestern, and western suburbs of Chicago.

“My column is meant to get more people out on their bikes and doing it safely,” he says. “The more people on bikes that drivers see on the road, the more careful they’re going to be when they see anybody on a bike.” 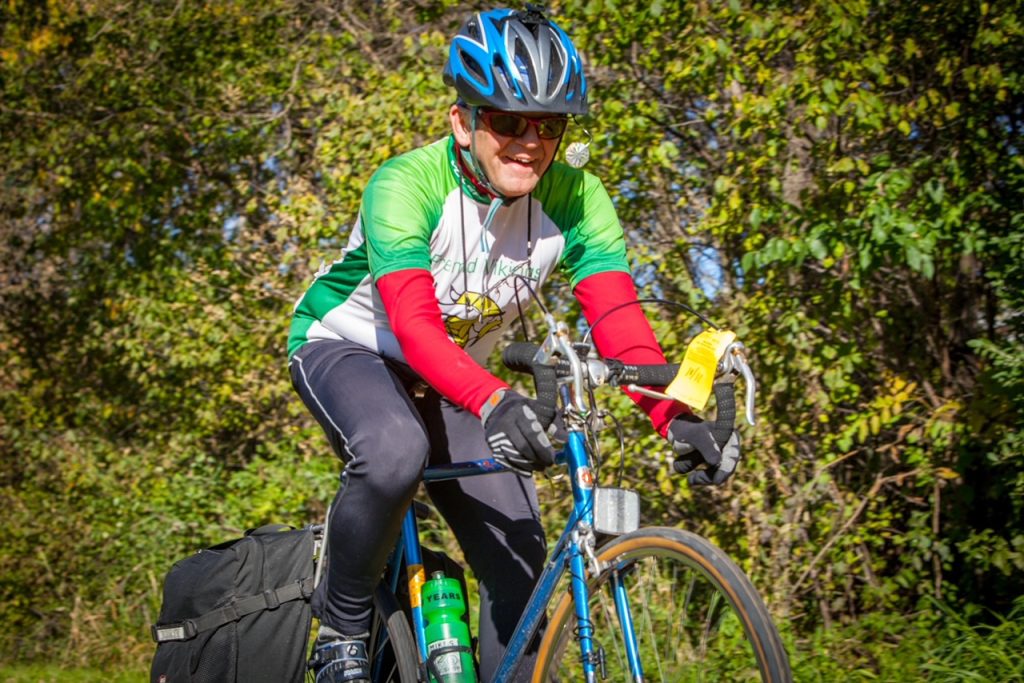 Banasiak pitched the idea for the cycling column to one of the Daily Herald editors in early 2020 after seeing the surge in bicycling during the COVID-19 pandemic. As more people picked up bicycling as a hobby or as a new mode of transportation for commuting and errands, Banasiak noticed that many of these newbie cyclists were not riding safely.

To educate cyclists on biking safety, Banasiak initially wrote blog posts on the Bike Palatine Club’s website. The posts covered a range of safety issues, including braking tips, how to fit a helmet properly, and exercises to improve bicycling posture.

Around the same time, the Daily Herald asked readers to submit ideas for sports coverage. Banasiak responded by suggesting that the newspaper write an article about bicycling or publish a regular cycling column.

Banasiak has been writing the “Along for the Ride” column since August 2020. While he values how the column gives him a large platform to discuss bike safety and share the joys of cycling, he also appreciates how much he has learned about bicycling through the reporting and writing process.

“I thought I knew a lot [about bicycling] because I ride about 3,000 to 5,000 miles a year,” he says. “But I learned how little I know about biking in the suburbs. What excites me about the column is I keep meeting different people who have their own niche in cycling.”

One of his favorite columns covered how Working Bikes and West Town Bikes, community bike shops based in Chicago, collaborate with suburban organizations to collect used bikes donated by residents of their communities. They work together to host bike drives and other events as well as set up drop-off locations for suburban residents to donate their used bikes year-round.

Working Bikes and West Town Bikes refurbish the bikes. They then sell some of the refurbished bikes at affordable prices and donate the others to local Chicago nonprofits and global charities. They use the proceeds from the bike sales to fund their other programs, including their affordable bike repair services and educational youth programs.

“This is a whole new world that I didn’t even know about. And it deserves to get some play in the press because these are exciting things that ordinary people can do,” he says.

Banasiak also enjoyed writing about his physical and emotional recovery after tearing his anterior cruciate ligament during a short, casual bike ride, where he and his bike fell into a traffic barrier lined with yellow tape.

In the two-part column, he shared how physical therapy helped him to overcome his injury in six weeks, but the mental recovery of the traumatic event proved to be more challenging. Twitches of terror and mini-flashes of the accident prevented him from initially riding his bike.

But by focusing on small goals and wins, he was able to get back on two wheels about 12 weeks after the fall.

As one of the nation’s few bicycling columnists featured in a traditional newspaper, Banasiak says he not only wants to inspire more people to cycle, but he also wants to spur more mainstream reporting of sustainable modes of transportation, including walking and public transportation.

When he’s not working on his column or coordinating activities for the Bike Palatine Club, Banasiak likes to cruise around the northwest suburbs on his bicycle. During the weekdays, he takes advantage of the plethora of bike lanes that have popped up all over Palatine in the last 10 years. In addition, he rides about 30 miles to 40 miles of trails and quiet roads in Palatine, Dundee, Barrington Hills, and Algonquin on the weekends.

“Biking is an anchor for me,” he says. “It’s not only for fitness, but it helps clear my head. … It keeps me sane.”