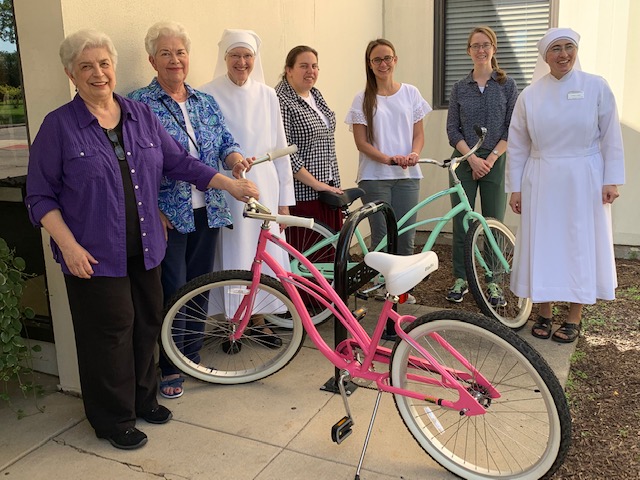 Installing a new rack for bike parking may seem like a modest contribution to a community. But the reality is that it can a big difference in people’s lives — especially for people with limited transportation options who rely on bikes to get around.

Getting more bike racks in the community has been one of the recent goals of the Palatine Bike Club.

With the September installation of a bike parking rack at St. Joseph’s Home for the Elderly in Palatine (see photo), the Bike Palatine Club has now donated five bike racks in three locations as part of its initiative to encourage cycling in the community.

According to Development Director of St. Joseph’s Home, Diana Olson, many volunteers, employees, and a couple residents of the home cycle regularly.

The installation of the rack near the main entrance makes it convenient for riders to secure their bikes close to the building. “This rack adds to the hospitality that St. Joseph’s Home is already known for,” said Sister Maria Lourdes, an avid bike rider.

The Bike Palatine Club made previous bike rack donations to Durty Nellie’s in Palatine as well as to a shelter for domestic abuse victims in the northwest suburbs. With Nellie’s, the club had partnered several years with the bar and music venue to host a spring bike ride. The club donated and installed two bike racks near the main entrance in May 2017 so that thirsty cyclists can roll right up to the door.

With the shelter, it was a different story. Over several months two club members independently had noted the pile of bikes clogging the front porch of the facility in the northwest suburbs.

With no easy place to secure bikes, clients and their children were hauling them up the porch steps and chaining them to the railing. The bike club decided to help by installing two bike racks at ground level in fall 2017.

“The racks have worked out nicely for us and keep the bikes off the landing,” said the manager of the house. “Kids love to use bikes in the summer and now they are more easily accessible. In addition, for many of our families, transportation is something that is hard to come by. Several adults have used the bikes to get to and from jobs or other necessary appointments.”

For more information about the club’s bike rack program, or to propose a rack for your own organization or business, contact club president Wayne Mikes at wmikesbikes@aol.com or call Mikes Bike Shop in Palatine at 847-358-0948.

This is a guest blog post written by Ralph Banasiak, a founding member of the Bike Palatine Club and former club treasurer. He’s been an Active Trans member since 2004. Photo above  courtesy of St. Joseph Home.