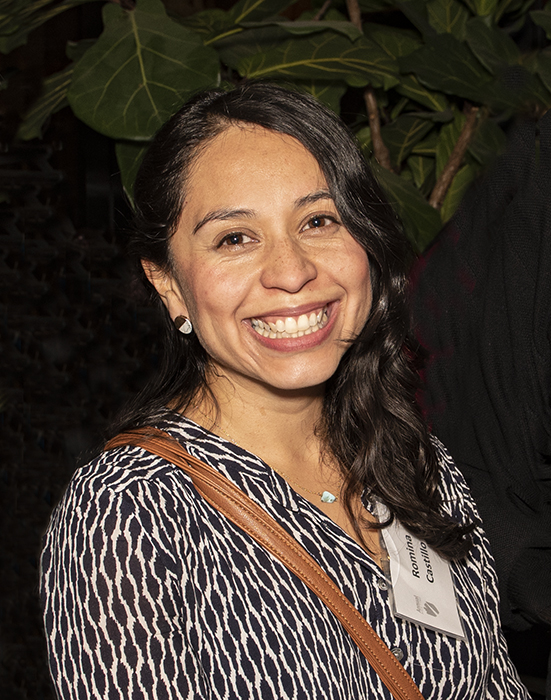 Sustainable transportation advocacy is typically made up of the usual suspects: policy wonks, urban planners, legislators, and other experts in the field exploring the best ways to improve walking, biking, and public transit. But Romina Castillo wants to make room at the table for other perspectives.

As a transportation advocate and planner, Castillo brings together transportation professionals with community residents, local leaders, and other nontraditional stakeholders to create a culture of partnership and inclusivity that leads to sustainable transportation infrastructure, programs, and policies that deliver impact. Her collaborative advocacy work earned her Active Transportation Alliance’s City Advocate of the Year Award, presented at the most recent Active Trans member meeting. This is the second time Castillo has been recognized by Active Trans for her advocacy work. In 2017, Active Trans honored her and the rest of the team from Slow Roll Chicago for improving bicycling infrastructure and culture on the South and West Sides.

According to Castillo, senior associate at urban planning firm Muse Community + Design, collaboration and engagement are crucial to successful transportation advocacy. Because most transportation advocates and other experts often focus on specific campaigns, residents and local leaders may not understand how these specific projects fit into the overall picture of improving sustainable transportation and the complex processes and funding involved in bringing these projects to fruition.

In addition, she says advocates and experts need to work together with residents to ensure these projects truly meet the needs of neighborhoods. So it’s vital to include the recipients of these transportation projects as an integral part of the planning and execution, Castillo says.

“When it comes to transportation planning, it’s such a broad-based, overwhelming, expensive thing to do. It involves larger issues that are interconnected like funding and community needs,” she says. “So we need to create a safe space to talk about those things. We need to create spaces where people feel comfortable to ask questions even if some feel like those might be stupid questions. That’s my intent on making transportation planning a little more approachable and more personal. … Bringing the advocacy world together with people from communities pushes things forward.”

Castillo has seen for herself how this type of collaboration and deep engagement builds trust and ultimately leads to successful advocacy. For example, Castillo was part of the team that developed the Vision Zero Chicago West Side Plan, which addresses how to improve traffic safety and reduce crashes in Garfield Park, North Lawndale, and Austin based on both community input and transportation planning expertise.

As community liaison for the project, Castillo fostered a diverse outreach and engagement process, in which transportation advocates worked together with community residents and stakeholders to craft the plan over the course of a year. That included organizing community meetings, open houses, round tables with community groups, and one-on-one conversations with key community stakeholders. In addition, the Vision Zero team held neighborhood events like Light the Night, which provided food, music, and activities designed to help residents understand how safe street design can reduce violence and ultimately improve the quality of life in their neighborhoods.

After collecting input from both residents and experts, the City of Chicago released the Vision Zero Chicago West Side Plan in late 2019. It features 15 strategies to enhance biking, walking, and public transit conditions. They include improving safety around public transit stops and stations, encouraging kids to bike or walk to their schools, and installing pedestrian and bicycling infrastructure.

Because transportation advocates and experts were willing to work closely with local residents and grassroots organizations, they built the trust necessary with the community to develop the Vision Zero plan efficiently, cohesively, and effectively — a strategy every advocate should hone, according to Castillo.

“You just want to make sure you’re talking the same language. But even before that, come in with a sense of humility,” she says. “Recognize you’re an outsider. You are an expert on a topic, which is urban planning or transportation, but you’re not an expert on the geography and needs of the community. Be humble in recognizing that you’re talking to someone [in the community] who is an expert in another subject matter. You want to be able to collaborate with others rather than just coming in with your own ideas.”

At the Active Trans member meeting in late 2020, here are remarks from Castillo upon accepting the  City Advocate of the Year Award from Active Trans

Castillo did just that when she participated in the expansion of the Divvy bike-share program to the far South Side. In July 2020, the Chicago Department of Transportation and Lyft, the owner of Divvy, announced that they will increase the program’s coverage area by about 60 square miles throughout the far South Side. The expansion will feature 66 new Divvy stations and 3,500 additional bikes, including standard Divvy bikes and electric bikes.

Castillo worked with local residents, community and civic leaders, and other stakeholders in Pullman and Riverdale as part of the project. By doing so, CDOT and Divvy were able to use research both communities had already conducted about their bicycling needs and infrastructure — vital information that pushed the expansion project forward.

They also conducted several community events and round tables, where they talked with residents about how bicycling fits into their lives, including destinations they bike to, challenges of cycling in their neighborhoods, and where they would like to see Divvy stations installed. CDOT and Divvy learned that most residents only biked for recreation on the weekends on trails. However, they indicated that they would be interested in cycling more if there were more bike lanes; connected bike lane networks; and other bicycling infrastructure for commuting, accessing essential services, and recreation.

“Now the city wants to be sure infrastructure and investment go hand in hand so that our communities don’t feel like we are just dropping off those bikes and they have nowhere to ride,” Castillo says.

Castillo brought this collaborative advocacy approach to a citywide level by helping to revamp the Mayor’s Bicycle and Pedestrian Advisory Council before it was recently dismantled by CDOT. Many of the changes were designed to create better communication between Chicago communities and CDOT. For example, CDOT previously developed the meeting agendas and facilitated the council meetings.

Based on Castillo’s recommendation, CDOT let community representatives on the council help develop the meeting agendas, bringing up issues that were important to their communities. In addition, the council began making site visits to neighborhoods to gain insight directly from residents about how to improve bicycling and walking in their neighborhoods and encourage ongoing, open dialogue between the residents and the council.

While CDOT has not yet created an entity to replace the council, Castillo wants CDOT to continue to use these inclusive tactics when it creates a new bicycling and pedestrian committee because this collaborative approach lays the foundation for long-term success. It not only helps educate stakeholders and promotes transparency, but also spurs intentional conversations and deeper engagement, according to Castillo.

“Creating connections is key to communicating ideas and really opening the doors to other conversations,” she says. “Building those connections really helps to steer interest and understanding for sustainable transportation planning.”