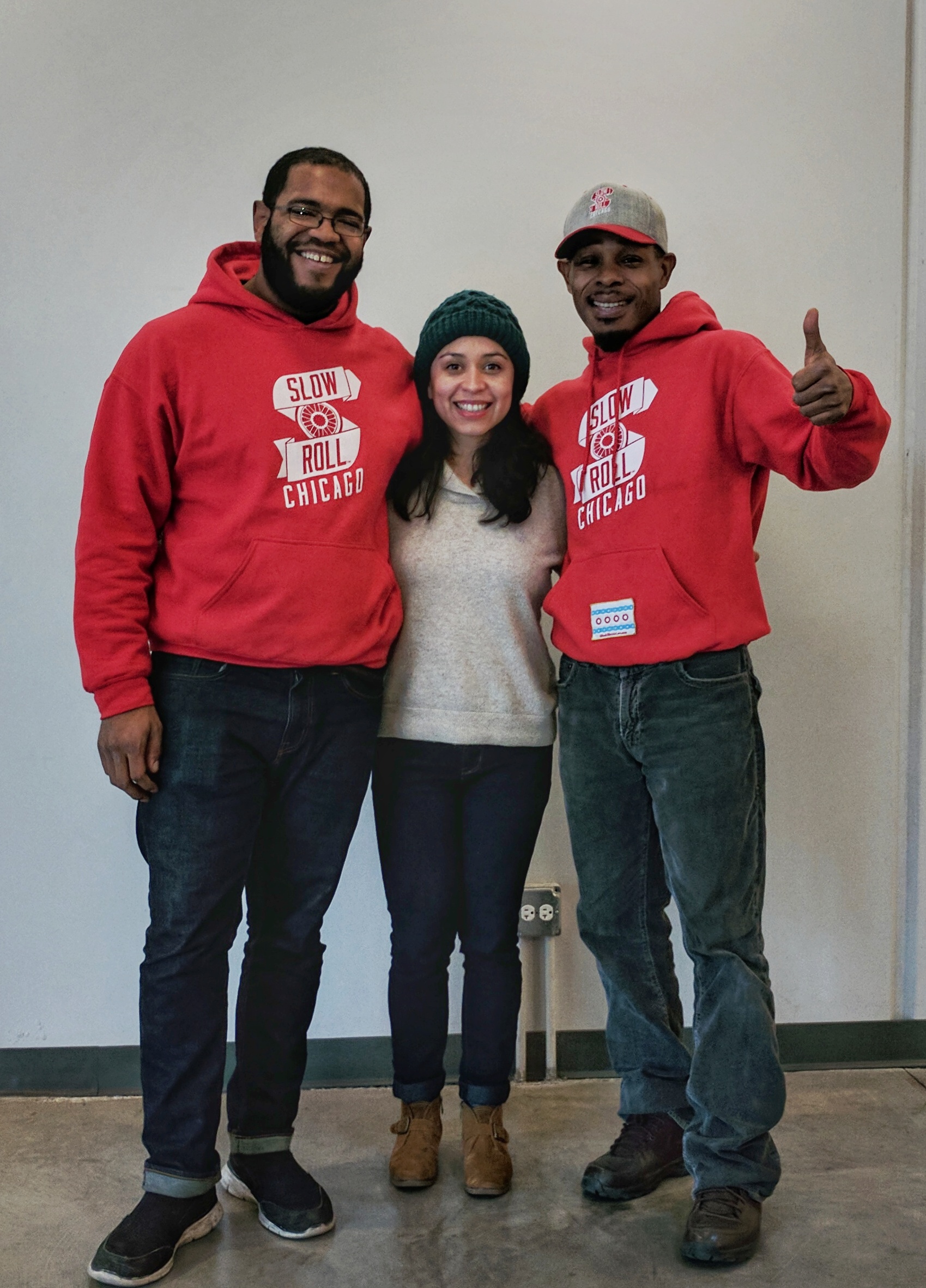 For Slow Roll Chicago, bicycling can help to transform communities. The nonprofit organization believes bicycling can improve the quality of life in low-income communities, particularly neighborhoods on the South and West Sides of Chicago.

Since it was founded in 2014, Slow Roll Chicago has been dedicated to developing bicycling infrastructure and culture in these communities, while also advocating for the transformative power of cycling to reduce violence, improve health and create jobs.

More than 2,000 riders from across the city and suburbs have taken part in Slow Roll Chicago’s organized group bike rides, which is the nonprofit’s signature program. Every week from May to October about 20 to 70 people hop on two wheels to get an up-close look at some Chicago’s most diverse neighborhoods. The leisurely rides give participants the chance to learn more about the community and its history and to get to know their fellow riders in a safe, comfortable environment.

We spoke with Romina Castillo (pictured, center), Slow Roll Chicago’s ride and outreach coordinator, about the nonprofit’s strategies for improving bicycling culture and infrastructure in low-income communities on the South and West Sides.

Castillo: We understand that one bike ride or even a few bike rides won’t change the community. But we see bicycling as a way to improve the quality of life in our communities. We advocate for more biking infrastructure, but we’re also advocating for better connections to active transportation in general, especially on the South and West Sides. Transportation is going to connect the people from our communities to jobs, education, services, recreation, businesses, food. We see biking and bike infrastructure as a way to connect people to those things that they need.

Biking also highlights the assets of the communities — not necessarily the hard infrastructure but also what I call the soft, fleshy infrastructure, which is people. We see people as assets. That’s why we always partner with community-based organizations for our bike rides because we like to highlight the work that they’re doing, and we classify them as assets. We want to connect people of the community to these organizations and their work. It’s a way of creating those connections between people and creating this other type of infrastructure in the city.

Once you have infrastructure to connect to what you need and to actually know who your neighbors are — the assets — well that’s going to lead to a more active lifestyle. It’s going to improve the health and wellness of our communities. So we see this as a connection of different elements that build upon each other.

Active Trans: What does Slow Roll Chicago believe needs to be done to improve bicycling and bike infrastructure in the South and West Sides of Chicago?

Castillo: First of all, we’re trying to shed those stereotypes of who is a cyclist in the city. People on the South and West Sides have this idea that in order to bike in the city you need to have all this gear. You have to buy pants. You have to buy shoes. Everything. When we come to these neighborhoods for our group rides, we teach people that anyone can be a cyclist in the city. You don’t need all this fancy equipment and gear as long as you are comfortable. So we’re always trying to share tips for safe riding and how you can ride comfortably.

And sometimes they think people who are biking are people who can’t afford cars. They just don’t have the means to get around. So again breaking those stereotypes. We teach them that this is healthy for everyone. This is healthy for an individual who’s biking, but also as a community. There’s going to be less emissions. Your family and your neighbors are going to be healthier. And it’s a social activity. So that’s how we work on improving biking culture.

When it comes to infrastructure, we advocate for open conversations between the city and the residents of the communities. We want infrastructure that works from an engineering and logistical point of view, but we want the city to create a network that works for the needs of the people in that community. The infrastructure and the network really has to connect and resonate with the people, and they have to feel like it’s theirs — not just the city’s idea of an inclusive network.

Active Trans: Has bicycling infrastructure improved in these communities?

Castillo: CDOT [the Chicago Department of Transportation] is working to extend the bike network. It’s definitely an improvement. Sometimes you don’t know if you should follow this “build it and they will come” model or if you should get people ready before it comes. So we’re trying to work on it both ways.

It’s very interesting. Even though the infrastructure is there, sometimes people in these neighborhoods don’t use it because the bike lane is really not connected to any other network that they use. Like people may use it to go for a bike ride on the weekends, which is great, but maybe they would have preferred a bike lane that they can use to bike to work or school, and there isn’t a network for that. So the city needs to build infrastructure around the needs of the people. And we haven’t seen that community outreach from the city. So therefore residents don’t connect with the network or the infrastructure that has been installed in their communities just because they feel like they didn’t have a say of why they’re going to be installed where they are.

The city really needs to get the buy-in of the community to see if people are actually going to need it there or not. So what we’re saying is bike infrastructure might have to look different in the South and West Sides just because of the needs of the community.

We need CDOT and other city agencies to really get the community’s buy-in. It’s not just marketing and outreach. It’s also educating people. That’s the way we see Slow Roll coming in and playing a role in facilitating that communication between the city agencies and the community.

Castillo: People want to bike in the city more, but they don’t feel comfortable doing it by themselves. So they find it really refreshing and safe to be able to bike with a group of people because we’re not going fast, and we’re just trying to keep everyone safe. So the feedback we get constantly is that people enjoy it so much because they’re able to have conversations with other people and feel comfortable riding.

Active Trans: What kind of impact has Slow Roll Chicago had over the last three years?

Castillo: With the rides, we always work with community-based organizations in the neighborhoods to highlight their work and help us with promotion. We have been able to create stronger networks of community organizations and connect them with one another. For example, last year we connected Universidad Popular with Working Bikes. We had conversations of what kind of collaborations could happen between them. Working Bikes said they had a fleet of bikes in their basement that they were not using. So they gave the bikes to Universidad Popular for one of their health and wellness programs. So people are riding these bike rides every time they use this program specifically. We see Slow Roll as the facilitator or convener of those conversations and being able to strengthen those networks between communities and exchange of ideas and services.

Active Trans: What is Slow Roll Chicago most proud of since it was founded three years ago?

Castillo: Being able to see Big Marsh [Bike Park on the South Side] completed. It was one of the first advocacy projects that Slow Roll undertook when it started. Oboi [Reed], one of the co-founders, also received an award at the White House as a Champion of Change in transportation. It was a great achievement to be recognized because we were nominated by many leaders in the city. So it was a great honor for Slow Roll to receive that. Those are big accomplishments, and it’s only been three years. We’re really hoping for more to come.

Please come to the 2017 Active Trans Awards Reception on Feb. 16, where we will be honoring Slow Roll Chicago, as well as Christopher B. Burke Engineering and MB Financial Bank.