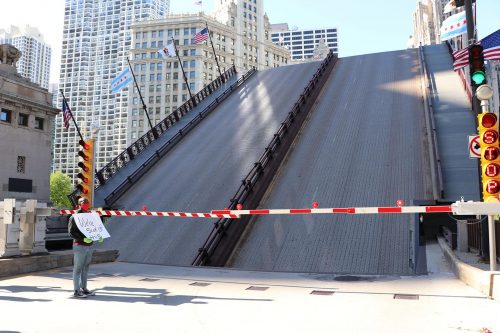 These decisions had major transportation impacts on thousands of city residents, particularly our most vulnerable neighbors such as people with disabilities and low-income essential workers.

Yet the report finds the city’s transit leaders who know their systems best often weren’t at the table when these calls were made.

In the days following the protests, Active Trans connected with city residents harmed by the public transit and Divvy shutdowns. We heard from people who had to walk several miles or bike as many as 25 miles to get home from work or visit family members in need during the pandemic. Others paid more than $30 for an Uber or Lyft, only to arrive late to work and lose needed income.

People with disabilities who rely on paratransit to get around weren’t able to get groceries or seek medical care. Due to the way transit bylaws are structured, paratransit can’t operate if buses and trains are not running.

The most impacted residents were disproportionately Black and Brown and low-income and people with disabilities.

These residents are more likely to rely on transit to get around and perform essential work that doesn’t fit a 9-to-5 weekday schedule. Many live in the neighborhoods hit hardest by COVID-19 that already lacked reliable and affordable transportation options.

It’s clear the transportation decisions made during the protests had devastating impacts on many thousands of city residents. The IG report confirms they were made by Mayor Lightfoot, the police department, and Office of Emergency Management and Communications officials, often without genuine consultation with the city’s leading transportation officials. They weren’t rooted in any advance planning based on previous experience.

Current and future elected officials must learn valuable lessons from this experience:

1. No more systemwide shutdowns. Transit is a public good and a necessity at all times and should be treated as such. Shutting it down should never be the solution and creates undue hardships, especially for people with disabilities, essential workers, and Black and Brown Chicago residents.

2. Ensure elected officials and transit agencies retain control over operations. During crises, elected officials must consult transit agency leaders and ensure they retain control of operational decisions, while taking emergency management and public safety factors into consideration. They know the system and the people who rely on it firsthand and should be at the forefront of operations decision making. This protocol could be part of transit management plans to address system issues during future crises.

Both of these points were emphasized in a petition to the mayor and Chicago-area transit agencies last October. Chicago’s transit systems must remain safe and reliable providers of mobility and access, whether through the course of an average day, a public health crisis, or during lawful protests.

According to the National Lawyers Guild of Chicago, legal precedent has found that public transportation is “necessary to the health, safety and public welfare of the people.”

Freedom of movement is freedom.