The needless harm done by shutting down public transit 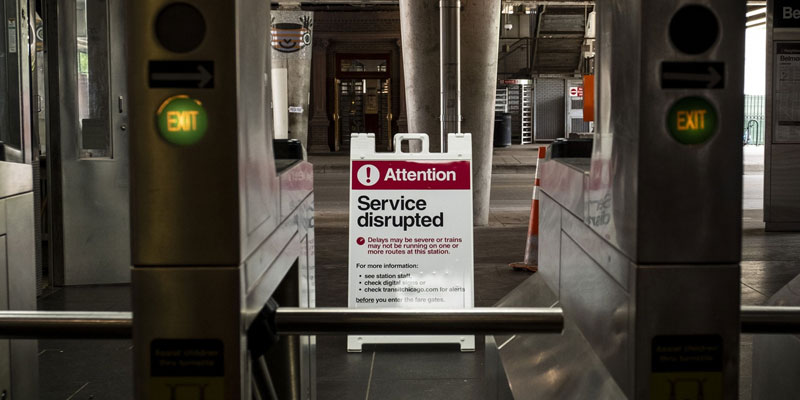 As I read tweets late Sunday night about the looting happening in the Loop amid the shooting of a young Black man by police, one of my first thoughts was resignation in thinking that transit would once again be shut down and the bridges once again raised.

I have seen social unrest in Chicago throughout my life here, but some of the infringements on movement I have seen taken by our city the last few months are some of the most troublesome I have ever witnessed.

The precedent the city is creating in treating public transit as something to shut down unilaterally when trouble arises is not one we should take lightly.

This is not an attempt to unpack what occurred in our city on Sunday or in early June, it is to bring attention to a recent strategy by our mayor and city officials to shut down transit and other modes of movement at a moment’s notice.

At the end of May and early June, the City of Chicago and transit agencies decided to halt all its bus and train service with little to no warning for people around the city. Since then there have been more shutdowns surrounding smaller-scale protests.

Buses were also rerouted in the area with little notification to riders. Pace paratransit vehicles also will not be entering the service area surrounding downtown, cutting off a lifeline for residents in our region most in need for mobility options.

As someone who is committed to social justice in the city and the world, I try to consider the impacts of policy decisions on the most marginalized residents. While I understand that the mayor and city officials are acting to protect the downtown region, it is important for our city not to attempt to solve problems by making decisions that further marginalize those already marginalized.

Shutting down transit throughout downtown and miles beyond the Loop makes it impossible for many people to get to-and-from work and access essential services throughout the region. The safety of operators is important to consider, but it’s not clear what role this played in the decisions. There has been no transparency about how these decisions are being made and the reason for the extent of the shutdowns.

One of the most troublesome parts of the decision to shut down transit is how these recent acts are creating a perception that transit is unreliable. The pandemic has severely impacted public transit by taking away a lot of its riders, some from fears of the virus and others due to working from home.

As we attempt to build a future where public transit has a sustainable place in our city’s fabric, shutting it down on a whim is not helping to shape that future. If anything, it is sending the message that it is a commodity that can easily be taken away.

We can address the challenges we are facing without creating scapegoats out of our public transit, bike-share program, and mobility. Our residents deserve the right to be able to move to do what they need to do. If that right is taken away, there needs to be full transparency behind the logic of the choices and the mechanisms that are being used for future decisions.

Protecting downtown cannot be the only reason for shutting down transit. If that is the case, we are essentially saying that the residents that rely on public transit do not matter as much as the need to create a wall around the Loop. That is not a precedent we can support if we want to build a foundation of racial equity in our city.

We cannot have a future where public transit is shut down continuously without having an honest conversation of who that leaves behind. We cannot create a more equitable city by making decisions that simply continue to perpetuate and deepen the racial inequities that already exist. Public transit serves as a bridge to opportunities that allows communities across the city to access needed resources — and we need to ensure it continues to serve this crucial role.