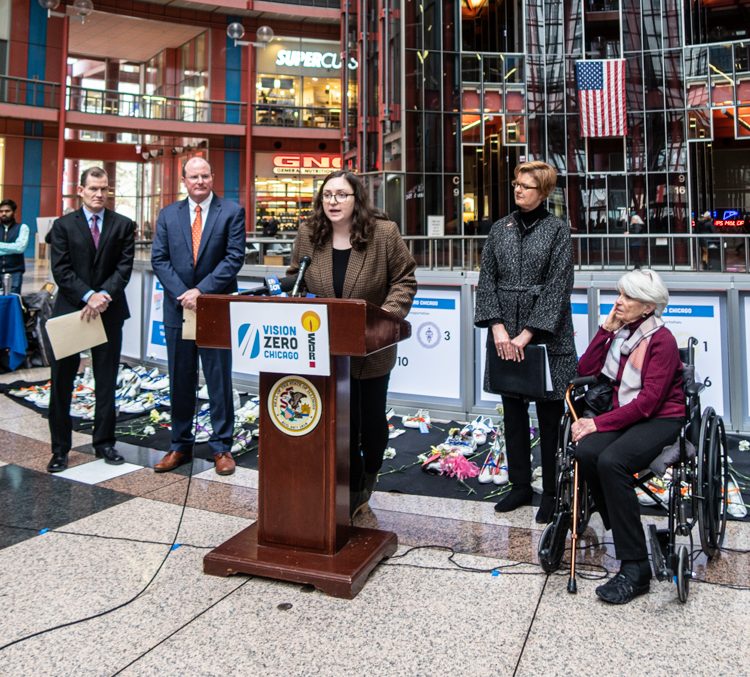 Every life lost is a tragedy. We can’t help but be overwhelmed when we think about the 78 lives lost in Chicago so far this year as a result of traumatic traffic crashes.

But we mustn’t become numb to these terrible events.

For the 2019 World Day of Remembrance for Road Traffic Victims event, which took place earlier this week, organizers lined up 78 pairs of white shoes in the Thompson Center. The shoes remind us of the people who will not feel the joy of walking down a tree-lined street in their neighborhood on their way home. The shoes represent people who will never again feel the wind on their face while riding their bike to meet up with friends.

It’s particularly important that we acknowledge the disproportionate number of lives lost on Chicago’s West and South sides in low-income communities and communities of color. Chicagoans of color are at a higher risk of dying in a traffic crash than White Chicagoans. More specifically, Black Chicagoans are more than twice as likely to be killed in a traffic crash than White Chicagoans, and almost half of all fatal crash victims are Black.

There are two goals that guide our work at Active Trans every day: we aim to shift trips away from single occupancy vehicles and cars to walking, biking, and public transportation. This goal works towards the second, which is reducing traffic crashes to ensure all traffic fatalities and serious injuries are eliminated by 2026.

To that end, we believe these traffic crashes are predictable and preventable.

We believe in the joyful, transformative nature of walking, biking, and taking transit. We also believe that when we design our world to prioritize these ways of getting around, we will create safer communities and save lives. 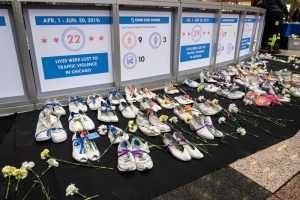 In order to build that world, we need resources, we need to present a united front, and we need elected officials to carry our message forward.

One of our messages to elected officials right now is a request for a Safe Streets Fund.

The Safe Streets Fund calls for dedicating a portion of the local transportation department budget to building streets that are designed with the most vulnerable roadway users in mind – people walking and biking, people with disabilities, seniors, and children. (Please join Active Trans in advocating for a Safe Streets Fund).

Attendees also heard from two people who shared their stories about the toll of crashes in their lives.

Crash survivor Phyllis Mitzen shared her story of being hit by a motorist on the third highest crash corridor in Chicago, Michigan Avenue. Since the crash occurred, Mitzen has been calling for lengthening the pedestrian crossing timing on Michigan Avenue. Donna Peace shared the story of her mother being killed by a driver while walking in New York City.

Their stories offered powerful examples of the need for systemic change on our streets by designing them for the most vulnerable roadway users.

Please sign on to our campaign to show your support for a Safe Streets Fund.