Navy Pier Flyover on track to be complete in 2018 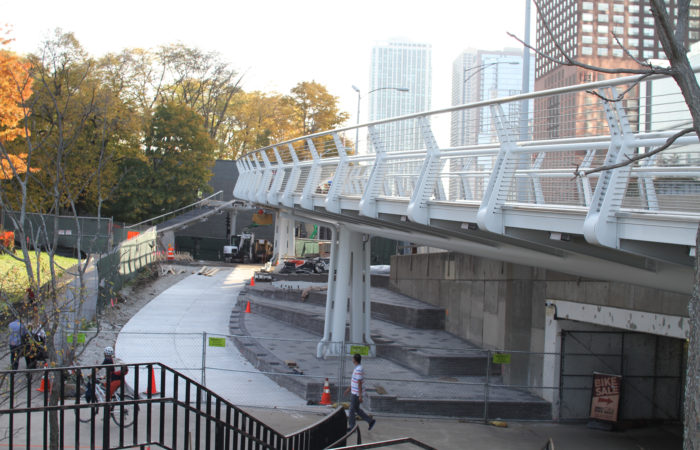 The lengthy construction process for the Navy Pier Flyover has been frustrating for many Lakefront Trail users, but the city says it will be finished next year.

The flyover, which will allow people biking and walking on the trail to bypass congested vehicle traffic around Navy Pier, is one of the highest profile active transportation projects in the region. We get questions about the status often, especially as temperatures warm up and more people use the trail.

We are disappointed it’s taking so long to build the flyover, but it’s important the city gets it right. The area is one of the busiest biking and walking corridors in the region, and Navy Pier continues to attract more visitors every year.

See John Greenfield's latest reporting on the project in the Chicago Reader.

With the park district already moving ahead with creating separated trail space for people biking and walking along the full length of the Lakefront Trail over the next two years, traveling along the lake should be much safer and more convenient for everyone by 2019.

The city is quick to point out that the costly project presents several design challenges, and that the lack of a state capital bill or dedicated federal funding sources have contributed to delays. The $60 million flyover is primarily funded by the federal Congestion Mitigation and Air Quality Improvement (CMAQ) Program, with additional funding from the State of Illinois.

We’ll continue to monitor progress on the flyover and push for it to be completed on schedule. For updates, check the project page and sign up to receive advocacy updates all year long.