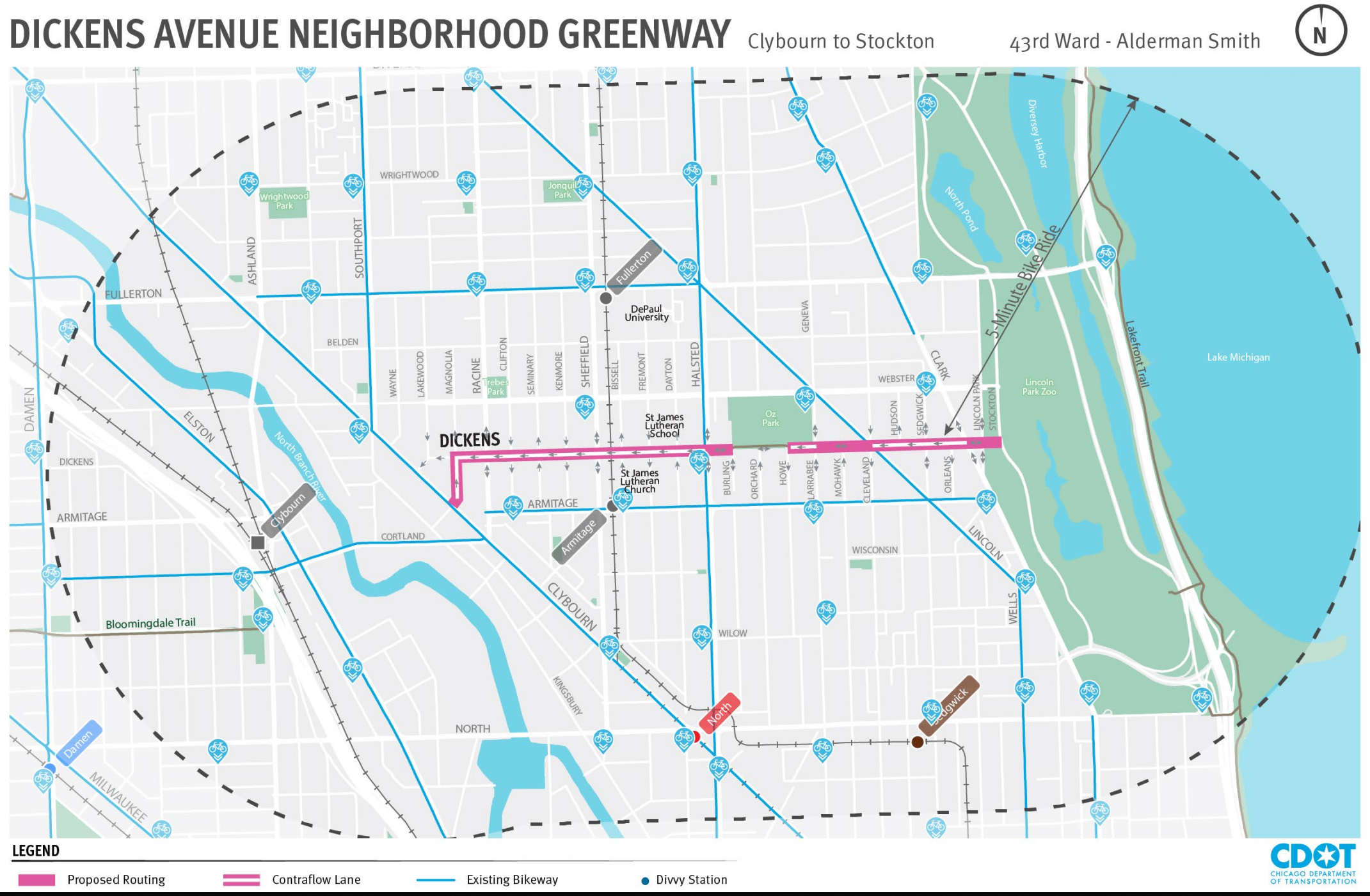 Update [8/21/19]: Please note the venue for the August 22nd public meeting has been changed to Lincoln Park High School.

The Chicago Department of Transportation (CDOT) has proposed creating a neighborhood greenway on Dickens Avenue.

This Thursday, August 22, is your chance to let CDOT and 43rd Ward Ald. Michele Smith know that the ward needs this project and more like it.

While some residents have expressed their interest in this project, more voices are needed to ensure that this project is not derailed by local NIMBYs.

Neighborhood greenways are low-stress streets that are designed to be safer and more comfortable for all users — people walking, bicycling, and driving. The streets are designed to be used by people of all ages and abilities, and provide a family-friendly alternative to busier streets.

If you’re a resident of the 43rd Ward and are willing to speaking on behalf of the project, please let us know (contact julia@activetrans.org if you’re interested in speaking at the event and would like to coordinate with others who plan to attend).

Can’t make it? Sign the petition in support of this street redesign, which would allow safer passage to people walking and biking in Lincoln Park. You can also email the ward office at rocio@ward43.org to let them know you support the project.

Potential improvements to Dickens include a 20-mph speed limit, pedestrian bumpouts, raised crosswalks, and two-way bike lanes. This proposed route would help create a key east-west connection between the Clybourn bike lane and Stockton Drive near to the lakefront.

Read our blog post about Lincoln Park resident and Active Trans Ambassador Stephanie Sims, who’s been working tirelessly on behalf of this project.

Active Trans continues to push for 100 new miles of bikeways to be built by 2023, including at least 65 new miles of protected bike lanes and 25 miles of neighborhood greenways.

Currently there are only 4.4 miles of low stress neighborhood greenways in Chicago; progress in expanding the network of bikeways has slowed greatly since a peak in 2012.

The Dickens Avenue Greenway would be a great opportunity to keep building out the low-stress bikeways network that our city desperately needs!