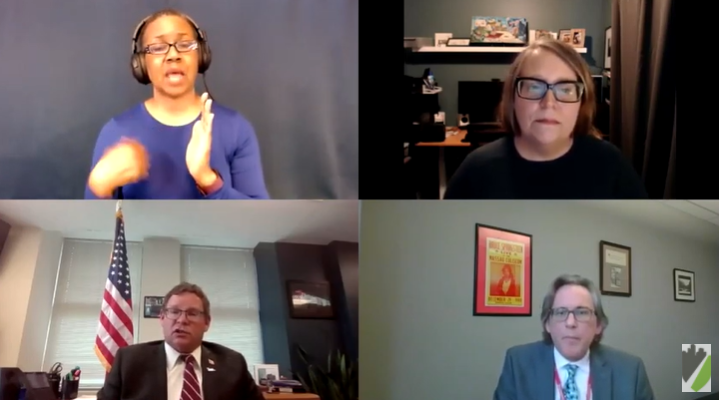 Now they’re preparing to adapt how they deliver service to the meet the new reality.

Metra CEO Jim Derwinski and Pace Executive Director Rocky Donahue spoke with Active Trans Executive Director Amy Rynell in our Transit Justice Forum on the Future of Suburban Transit. Leanne Redden, head of the Regional Transportation Authority that oversees Metra and Pace, presented about the approach the region is taking to this period of change.

They were joined by U.S. Rep. Marie Newman to talk about the federal government’s role.

Alfred White also spoke, a suburban warehouse worker who struggles to access his job from his South Side home.

Watch the full recording and see highlights below.

The newly elected congresswoman who represents Chicago’s Southwest Side and West Suburbs discussed how Chicagoland “transit is in a much better place” as a result of President Biden’s American Rescue plan, which included $1.5 billion for Chicago-area transit.

Now the fight moves to the upcoming federal infrastructure package: “My top line priority is that we put equity and accessibility at the forefront of this legislation.”

Alfred White, an essential worker, commutes six hours each way on transit to his job at a suburban warehouse.

He leaves the city at midnight to get to his 6 a.m. shift and can’t work a full day because of the lengthy commute. But he has no choice: “I have to pay the bills.”

Both leaders praised Cook County for funding the South Cook Fare Transit pilot. Metra and Pace have wanted to collaborate on better, more affordable service in the Southland for years but the money hasn’t been there — until now.