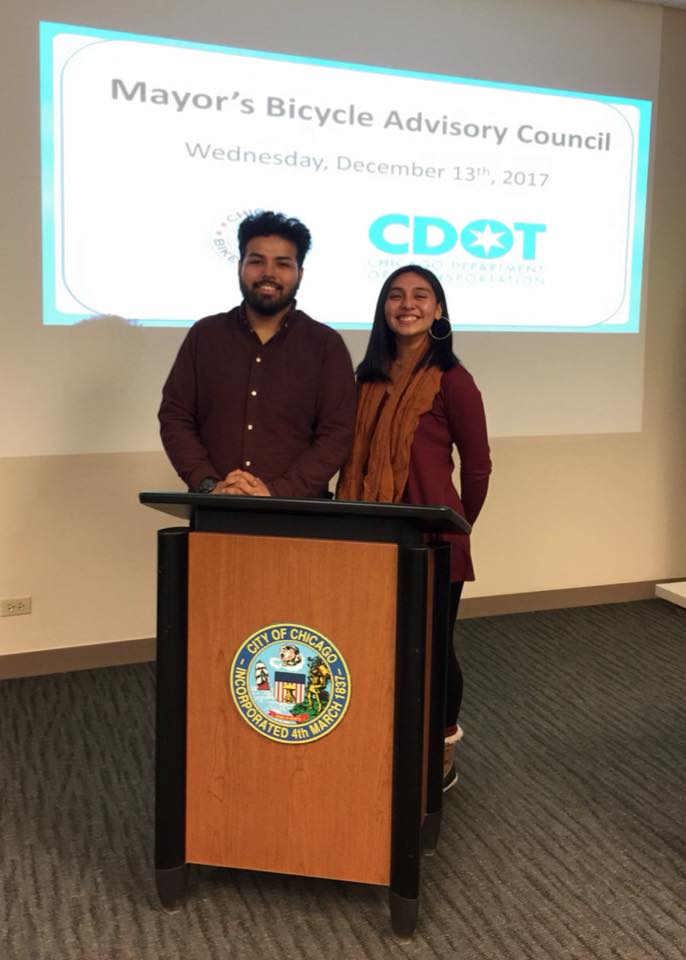 The Chicago Department of Transportation (CDOT) organizes and chairs the Mayor’s Bicycle Advisory Council (MBAC), which meets quarterly at city hall, and is open to the public. The meetings are a great way to stay informed on CDOT projects and learn about new initiatives and improvements to infrastructure around the city.

The most recent session, which convened last week, started with the sobering statistics of fatalities of people riding bikes. There have been six fatalities year to date, according to the Chicago Department of Police.

Next, Rosanne Lubeck, the Vision Zero Coordinator, gave an update on the progress the Vision Zero West Side Outreach team has accomplished in 2017. She highlighted the truck side guard rail ordinance as a win for the Vision Zero campaign as well as $2 million from aldermen in menu-money-funded Vision Zero improvements and $1.3 million Invest in Cook grant that will cover safety improvements on four corridors.

Two of the CDOT Bicycling Ambassadors, Jose Briceno and Karen Serrano, gave a recap of their 2017 outreach efforts. They highlighted their efforts working with youth, as well as seniors and police engagement efforts. They also taught 99 people to ride a bike. (You can request the Bicycling Ambassadors to attend your community event, school function or block party here.)

CDOT spokesperson Nathan Rosenberry gave an overview of the Logan Square Milwaukee Avenue Reconstruction Project. The project group is planning to present suggested improvements at the second public meeting for the project in January or February 2018. Stay tuned as Active Trans works to mobilize residents to attend the public meeting.

Sean Wiedel, assistant commissioner of CDOT, said that Divvy will be focusing on adding density to the network, rather than expanding it in 2018.

Amanda Woodall, Program Manager for Divvy, led a group conversation about the potential of dockless bikeshare coming to Chicago. CDOT staff plan to meet with potential vendors in the new year and collected questions from the attendees that they would like CDOT to be asking of the vendors.

As with all MBAC meetings, the community representatives, who serve two year terms, provided comments, and then the floor was opened for public comment.

The comments ranged from concerns about specific intersections along Roosevelt Road and the state of viaducts on the South Side along State Street, to questions for CDOT about its implementation priorities for 2018, which will focus on reinforcing protected bike lanes with concrete barriers and neighborhood greenway projects, such as the Manor Greenway.

Romina Castillo, West Side Community Representative, also expressed interest in seeing the bikeways network expand to the industrial corridor on the West Side where there are currently overwhelming barriers to low stress and safe biking like the Stevenson Expressway and industrial sites.

The next Mayor’s Bicycle Advisory Council meeting will be on Wednesday, March 7, 2018. Email lauren@completestreetschicago.org to get notifications for upcoming MBAC meetings.