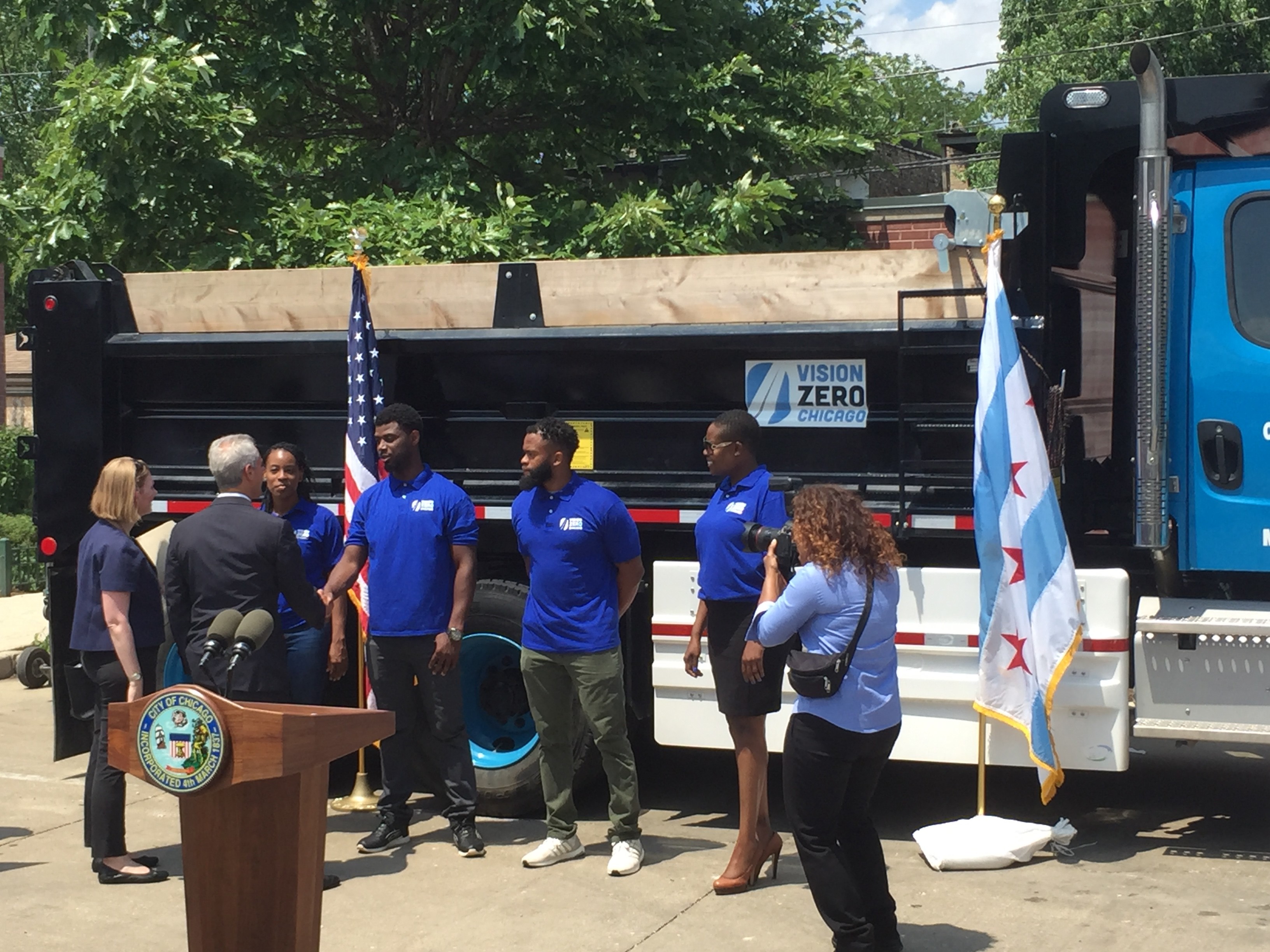 UPDATE: The ordinance requiring city contractors to install low cost safety equipment on large trucks was approved by City Council on July 26, 2017. Active Trans commends this step towards making Chicago safer for all.

Last week, the Chicago mayor’s office announced the introduction of a truck safety ordinance to city council as part of its renewed Vision Zero initiative.

The announcement represents the city following through on one of the commitments in the recently released Vision Zero Action Plan to eliminate all traffic fatalities in Chicago by 2026.

Contractors will be required to phase in the installation of safety equipment, starting on January 1, 2018, with full compliance required by January 1, 2021. The city is also committing to the same standards for their own fleet of trucks.

The equipment to be installed at the contractor’s expense includes mirrors to increase visibility of people walking and people biking for drivers, as well as lateral protective devices, also known as side guards, to decrease injury due to collision.

After six people biking were killed in crashes with commercial vehicles last summer, the need for a truck safety ordinance became even more painfully clear. Active Trans joined others in the bicycling community in calling on the city to strengthen its safety regulations for large vehicles.

According to the Chicago Department of Transportation, 33 pedestrians and cyclists have been killed by large vehicles on Chicago streets since 2010. If a truck is involved in a crash, the chance of a fatality triples.

The safety equipment required as part of the ordinance is proven to save lives. This ordinance will not just help create safer streets for bikers but also for pedestrians who are the most vulnerable roadway users.

Crash victim Dee Palagi, who spoke with Active Trans this past spring, told DNAinfo, “this [ordinance] should have already been in place. But it is a good thing moving forward.”

Although the timeline for the implementation for this ordinance is lengthy, it’s an important step in reducing the number of serious and fatal crashes involving large vehicles. Active Trans hopes private sector leaders will step up and install the equipment before it’s legally required, and we’ve spoken with companies interested in upgrading their fleets as soon as possible.

Check the blog regularly for coverage of how Chicago is moving towards a Vision Zero future we all deserve, one without any traffic fatalities.