Home / Blog / Show your support for the Leland Greenway extension

Show your support for the Leland Greenway extension 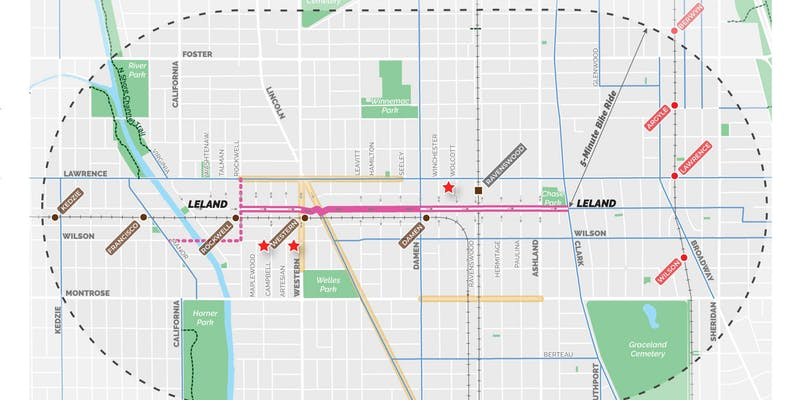 Want a chance to let the Chicago Department of Transportation and 47th Ward Alderman Matt Martin know you support the extension of the Leland Greenway?

On Tuesday, September 24, you’ll have an opportunity to let them know that the greenway will fulfill a major need for a low stress connection for people biking between the Chicago River and the Lakefront Trail.

Neighborhood greenways are low-stress residential streets that use traffic-calming designs to make a great route for people walking and biking.

More details will be shared at the public meeting. Please join us on September 24 to share your input, which could include your thoughts about what intersections need of the most intervention.

The Leland Greenway currently runs between the lakefront and Clark Street. This proposed extension would provide a key connection in building a network of trails and bikeways that encourage people of all ages and abilities to get around by bike.

The extension would also connect to the 312 River Run Trail, slated to be completed next year, as well as the completed Manor Greenway. Both of these are key components of our campaign for a continuous biking and walking trial along the Chicago River.

The Leland Greenway extension is an great opportunity to implement the city’s goal to connect residents to the Chicago River and the lakefront. Plus, it’s the only east-west street within this part of the North Side where a low stress connection like this could work.

We hope you’ll get involved — or continue to be involved — in the effort create a true network of low-stress bikeways across the region. The goal is to build off the existing amenities and infrastructure until all Chicagoland residents live within one quarter mile of a low-stress bike network.

Join us on September 24 to keep pushing the city to implement that vision!

There will also be a bike safety workshop the evening of Tuesday, September 17 at Roscoe Village Pub, featuring the City of Chicago Bicycling Ambassadors and Bike Lane Uprising.