Safety on CTA the right way 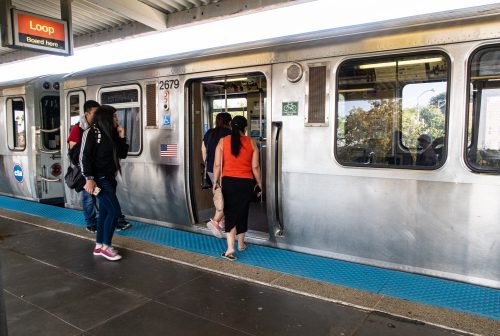 Active Trans joined with the local CTA bus and rail operator unions and several community groups to call on Chicago to protect transit riders and operators by engaging in a community-driven process to address safety concerns on CTA following the Feb. 28 police shooting.

Partners include Amalgamated Transit Union (ATU) 308; ATU241; Chicago Jobs with Justice; the Bring Chicago Home coalition including the Chicago Coalition for the Homeless and ONE Northside; and the Illinois Coalition for Immigrant and Refugee Rights.

Following is the full joint statement:

The Amalgamated Transit Union (ATU) locals in Chicago representing thousands of CTA workers is joining with community partners to call on the City of Chicago and the CTA to move quickly to staff buses, trains and CTA stations with safety personnel trained in de-escalation and non-lethal intervention tactics.

Ken Franklin, President of ATU 308 and Keith Hill, President of ATU 241, joined with Chicago Jobs with Justice, the Chicago Coalition for the Homeless and the Active Transportation Alliance to call on the City to protect both riders and workers without relying on excessive policing.

“We understand and appreciate the Mayor’s desire to act quickly in response to a spike in crime on the CTA. However, we had a tragic example on Friday February 28th of why adding SWAT teams and CPD officers is not the best solution to truly making our transit system safe. Their presence does not guarantee our safety and can actually pose additional risks,” Ken Franklin, President of ATU Local 308. “It is disappointing to see armed police deployed on our transit system, and new policy proposals presented without consultation with the workers in the transit system and community partners at the table.”

The February 28th police-involved shooting on the red line of a passenger crossing between cars happened just days after the Mayor increased police presence on the CTA, including deploying SWAT teams. Earlier that same day, Mayor Lightfooot and Interim Police Superintendent Charlie Beck announced a plan to increase police presence throughout the system, adding detectives assigned to CTA incidents and increased “strategic” use of surveillance. The shooting victim is no longer in critical condition and charges have been dropped.

“What we need is increased safety personnel on the trains and buses that can de-escalate and problem-solve. We need CTA workers to replace SWAT teams and police, and to be trained in non-lethal tactics so our operators can focus on getting people safely to their destination,” said Keith Hill, President of ATU Local 241.

“Right now, we are working to move legislation in Springfield to improve the training and number of CTA workers to serve as safety personnel on public transit. This would not only improve transit safety but is a more cost-effective use of taxpayer dollars than hiring SWAT teams and police”, said Toi Bowers, Secretary-Treasurer of ATU Local 241. “We call on the Mayor and our state elected officials to support this legislation. We must ensure that our frontline workers are trained to deal with the challenges they face. Our motto is that ‘We move Chicago’. Our members want to move Chicago safely, for our members and the riding public.”

“We also support our partners efforts to secure funding for homeless and mental health services so that the city’s most vulnerable are not at further risk when forced to use public transit as a place of refuge,” said Deborah Lane, Secretary-Treasurer of ATU Local 308.

“The increased police presence on buses and trains poses an unnecessary risk and intimidation for immigrant communities who are already under increased threat from this administration,” said Lawrence Benito, CEO of the Illinois Coalition for Immigrant and Refugee Rights. “The Trump administration recently announced the deployment of Border Patrol tactical agents to assist ICE in Chicago. The SWAT presence will increase confusion, fear and mistrust in a moment of heightened fear within immigrant communities. We cannot put our communities at further risk by having increased numbers of armed police and SWAT officers on our transit system.”

“Over 86,000 Chicagoans are experiencing homelessness. We cannot allow the CTA to be the refuge of last resort for people in crisis,” said Ronald Matthews, a volunteer with the Chicago Coalition for the Homeless, “We are calling on the Mayor to work with the Bring Chicago Home coalition and over 35 State Legislators that have co-sponsored our proposal.” The bill would adjust Mayor Lightfoot’s existing proposal to increase real estate transfer taxes on properties over $1 million and could help over 5,000 households experiencing homelessness with just one year of funding. Ronald continues, “permanent housing solutions will provide stability for thousands of lives and remove the burden on our transit system as having to serve as a makeshift shelter.”

A six-month pilot program on the BART system in the Bay Area may be an example for Chicago. The agency is deploying 30 unarmed ‘transit ambassadors’ trained in de-escalation and anti-bias with the goal of addressing customers’ concerns about safety.

“The police shooting at the Grand Red Line is a pressing example of why Chicago must develop alternatives to policing and criminalization to keep our trains and buses safe. These alternatives should be developed through a robust community-led process that prioritizes racial equity and centers the voices of people most impacted by the issue. Any transit safety plan should be led by Chicago residents and transit operators and center the voices of low-income people and Black and Brown transit riders,” said Interim Executive Director Melody Geraci of the Active Transportation Alliance.

“We are united in calling on Mayor Lori Lightfoot and the CTA to immediately create a working group to address safety on the CTA which includes representation from the Amalgamated Transit Union locals 241 and 308 as well as community partners. This group can and should inform policies and implementation strategies to improve safety on the CTA,” said Susan Hurley, Executive Director of Chicago Jobs with Justice. “We stand in solidarity with ATU and fellow community partners to insist that we work together to improve safety on CTA the right way.”