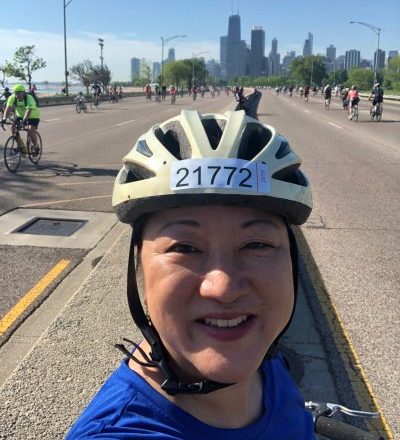 February 2020 update: State Rep. Mah will be receiving the Active Trans Public Leadership Award at our 2020 Awards Reception on March 5. Please join us.

Since being elected to the Illinois House of Representatives for the 2nd District in January 2017, Rep. Theresa Mah (D-Chicago) has actively pushed for legislation that improves walking, biking and public transit. The freshman lawmaker’s most recent win occurred when then Gov. Bruce Rauner signed the Bike Safety and Dutch Reach Act.

The law adds bike safety to the state’s Rules of the Road manual and the driver’s license exam. They will include information about the Dutch Reach method, which encourages drivers and passengers to use their far hands and reach across their bodies to open car doors, forcing them to look back for approaching cyclists before exiting their cars.

Mah worked with Active Trans to get the legislation written and passed — gaining bipartisan support in the Illinois General Assembly.

Active Trans caught up with Mah to learn about why this legislation and other sustainable transportation issues are important to her and the diverse communities she represents in the 2nd district, which includes Back of the Yards, Bridgeport, Brighton Park, Chinatown, McKinley Park and Pilsen.

Active Trans: Why do you think the Bike Safety and Dutch Reach Act resonated with both parties with this rare show of bipartisanship?

The bottom line is it can help save lives. It’s hard to argue with that. It’s also just common sense. Also, it’s not very difficult to implement. There is minimal cost involved. The measure simply adds something to the driver’s ed curriculum and fosters a habit so that people can operate their vehicles alongside bicycles in a manner that’s safer for everyone.

Active Trans: You work with and support a lot of local community groups that are working to make Chinatown more walkable and bikeable. For example, the Coalition for a Better Chinese American Community is working with Active Trans to create a continuous trail along the south branch of the Chicago River, essentially connecting Chinatown to downtown.

My husband teaches at Roosevelt [University], and he cycles to work. He has to go all the way over to the lakefront, and then north, because Archer Avenue seems a little unsafe.

Rep. Theresa Mah: It’s very important because the population in Bridgeport, Armour Square and even Bronzeville has been changing and increasing. There’s more of a population that reflects typical bus riders, folks who rely on bus services. Immigrants, older folks, students. We wanted to get the bus line restored to serve the changing population in the neighborhoods and the new needs that we were seeing. There aren’t a whole lot of east-west bus routes that serve those communities.

Active Trans: You’re the lead sponsor of the Transportation Benefits Program Act. If it’s passed, the law would require all local employers to offer a federal transit tax benefit to employees. What prompted you to introduce this bill when transit benefits are already part of the federal tax code?

Rep. Theresa Mah: A study found only a quarter of the employees working downtown took advantage of this pre-tax benefit. It just struck me that maybe the state could do something to encourage businesses to offer it because it’s a tax benefit that’s available through the federal government. But, as an employee, you wouldn’t be able to sign up for it unless your employer offered it.

The bill is meant to get employers to offer this program that would help people save money. If you’re able to purchase your transit pass, your CTA pass or Metra pass, on a pre-tax basis, you would save money. Your company would save money as well. It just seemed like another common sense tweak that you’d make to public policy. It increases both mass transit ridership as well as help folks who could sign up for their benefits pre-tax and save money.

Active Trans: You’ve worked on a number of sustainable transportation matters during your first term. Why was it important for you to address these issues?

Rep. Theresa Mah: I represent a district that is home to immigrants and working class communities. Many of my constituents rely on our public transportation system as well as biking and walking to get where they need to go. Knowing that, I feel it’s a responsibility to strengthen and support those systems and make them more user-friendly for everyone.