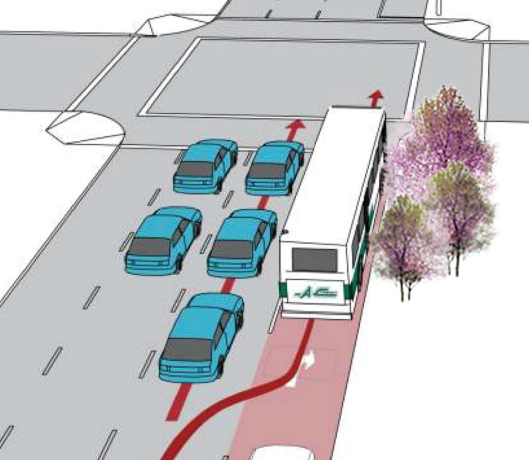 Rail systems are a fast, often preferable transit option for many people, but building them is time consuming and costly. Bus rapid transit (BRT) offers the experience of rail in the form of four wheels.

BRT is a more economical approach for cities to improve the speed and reliability of their bus service. It has also proven to spur development.

The city of Gary, Indiana, is one local community that sees future development happening through BRT.

BRT is a key part of the city’s Livable Broadway plan, which is a collaboration between the Gary Public Transportation Corporation (GPTC), Indiana Department of Transportation (INDOT) and the cities of Gary, Crown Point and town of Merrillville.

The goal of the regional plan is to improve the Broadway corridor by creating a transit-friendly community that combines transit and land-use development.

GPTC secured $3.1 million in federal grants to get the BRT pilot going.

Broadway is an Indiana state road and high vehicle corridor. Stretches of it aren’t very pedestrian friendly. There aren’t sidewalks or crosswalks, nor easily accessible bus stops in some areas.

The plan calls for more crosswalks at bus stops while offering frequent service and direct routes for the 1,500 daily riders who use the current route every day.

The proposed BRT line will cut commute times down to twenty minutes. This will be easily attained with the addition of a bus bypass lane. The Chicago Tribune reported INDOT plans to repave Broadway before BRT construction begins.

A limited number of stops with the addition of better seating, lighting and enhanced signage at new solar powered bus shelters will create a better experience for bus riders.

Despite approving TIF funding for fifteen new shelters, concerns were raised by some members of the Gary Redevelopment Commission about them being vandalized. GPTC is looking at different kinds of shelters made from vandalism-resistant materials.

There is also talk about adding traffic signal priority; various funding sources are being explored.

The route will run north from the Gary Metro Center south to neighboring Crown Point and Merrillville, connecting people to many schools, healthcare centers and retail establishments, which all make up 10 percent of non-steel mill jobs in Gary.

The BRT project will tie in with development happening on the north side of Broadway. The project promotes development within a quarter mile of BRT stops with the addition of public plazas and having entrances to buildings be closer to transit, creating a community that is more walkable.

The Livable Broadway Regional Plan is a great example of how BRT can have positive impacts in communities by making them more walkable and connecting people to jobs.

The City of Chicago is looking at an exciting BRT on Ashland Ave. If Ashland BRT were implemented in Chicago, it would connect twelve communities between Irving Park Rd. and 95th St. It would connect people to jobs and be Chicago’s first rapid transit line outside of the Loop.

This is the fifth post in a blog series on Bus Rapid Transit (BRT) in the U.S. Learn more about our BRT organizing and contact us to get involved.