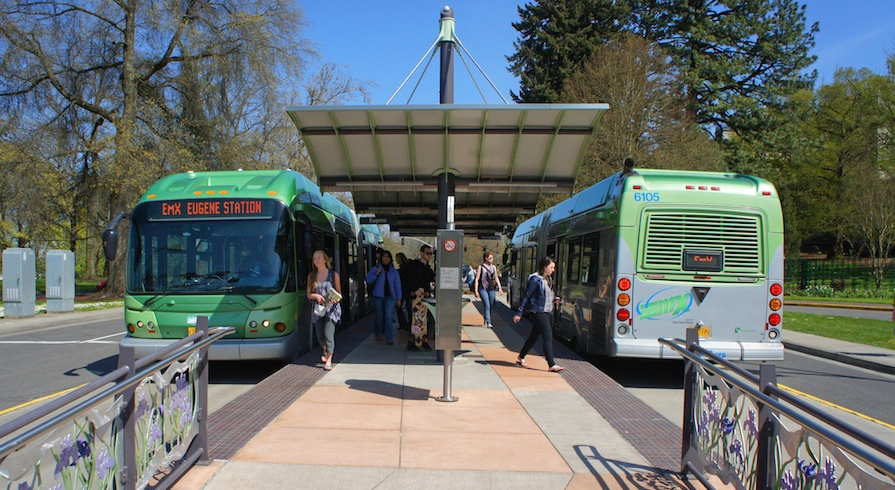 Many cities across the United States are adopting bus rapid transit (BRT) as a cost-efficient way to improve their public transportation system.

A new study by Arthur C. Nelson from the University of Arizona and published by the National Institute for Transportation Communities (NITC) at Portland State University, found that there are many economic benefits in areas where BRT is implemented.

Nelson analyzed real estate trends, commercial rents and the expansion of multi-family homes in cities with high-grade BRT, such as Cleveland, Las Vegas and Los Angeles.

The study says from 2000 to 2007, areas located within a half-mile of BRT corridors experienced stimulated office space growth. New multi-family residential development increased and premium rents gained foothold for office spaces within the corridors were found in a many of the areas examined.

After the 2008 recession, these corridors bounced back better than other areas that didn’t have BRT. The office spaces expanded by one-third and brought in higher-wage jobs. Manufacturing jobs also grew.

BRT not only can bring in new development, but also better paying jobs that stimulate the local economy.

Along with the important economic returns that go hand-in-hand with BRT, Nelson said that BRT affects development patterns of metropolitan areas.

But to fully reap the financial benefits, cities must implement a high-grade BRT system with features such as traffic signal priority and dedicated bus only lanes. Otherwise, it won’t be as successful.

Investment in public transportation is important for cities big and small to flourish, and it’s especially important given the growing desire for walkable communities.

The study gives greater support to the expectation that a BRT on Ashland Ave. in Chicago would be an economic engine for the corridor. If Chicago continues to invest in BRT, it will increase job access and stimulate the local economy.

A new rapid transit line on Ashland would connect 12 communities between 95th St. on the south end and Irving Park Rd. on the north end. Nearly 100 schools, and countless small businesses, restaurants and hospitals, are within walking distance of Ashland. This study shows the economic benefits of the project make it a worthy and efficient investment.

More details can be found on the full report, National Study of BRT Development Outcomes.

Photo coutresy of the Institute for Transportation & Development Policy (ITDP)