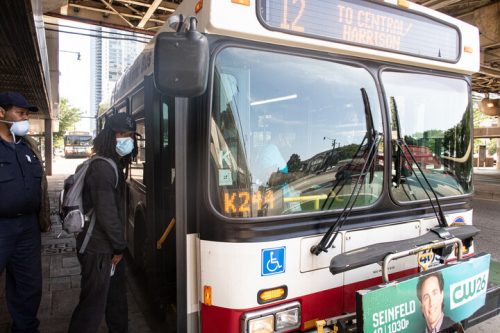 Update (11/5/21): Unfortunately, the RTA has since abandoned this data-driven approach that considers racial equity and returned to a more standard formula process for allocating federal funds. This decision has sparked ire and consternation among the transit agencies, highlighting our region’s inability to plan and coordinate transit service effectively.
—
To achieve greater equity in the Chicago region, we must fundamentally rethink how we’re spending our limited transportation dollars.

This is why the Regional Transportation Authority’s (RTA) — the region’s public transit oversight agency — recent decision to focus federal COVID relief funds in the highest need service areas is so important.

The agency chose not to simply pass the money through to Chicago Transit Authority (CTA), Metra, and Pace using a decades-old standard formula, as is traditionally done. Instead, it launched a process to direct funding to the “people and places that need it the most.”

This may seem like an obvious move to make, particularly during a once-in-a-century pandemic that’s hitting Black and Brown communities the hardest. But sadly it’s a road that’s rarely taken.

Elected and appointed officials are often concerned about equality and “geographic equity.” They try to ensure every part of the region gets its slice of the pie.

But there’s nothing equal about transportation resources in the Chicago area. Decades of structural racism and white supremacy led to policy and investment decisions that consistently harm Black and Brown people.

As a result, people of color on the South and West Sides and many suburbs live with longer commute times, unfair and abusive enforcement, dirtier air, and dangerous streets.

COVID-19 has only made the situation worse. Residents facing the greatest mobility changes are more likely to live in the areas hit hardest by the virus and less likely to be able to work from home.

The RTA acknowledged this reality in their decision to rethink how they distribute funds. The agency identified the workers most likely to use transit to commute and the people most likely to need transit to access critical goods and services. These groups make up “critical need areas” for public transit and are given priority with the new federal funding.

This doesn’t mean that other parts of the region will be ignored — nor should they. People across Chicagoland could benefit from more frequent bus and train service during and after the pandemic. But officials must make a deliberate effort to focus resources in the highest need areas to begin to address vast inequity in the transportation network.

Back in April, Active Trans and other advocates called for Chicago transit agencies to center racial equity in their response to the pandemic. Our letter to transit boards recommended “maintaining critical mass transit routes” and “applying a racial equity lens to federal stimulus spending.”

Now the RTA board has taken initial steps in a process for distributing transit funds that aligns with these goals. If it follows through and CTA, Metra, and Pace get on board, it could be a model that’s used for other federal and state funding sources.

This spring the agency plans to kick off a planning process to “reimagine transit” in a post-COVID world. Rethinking how and where we spend transit dollars is a great place to start.