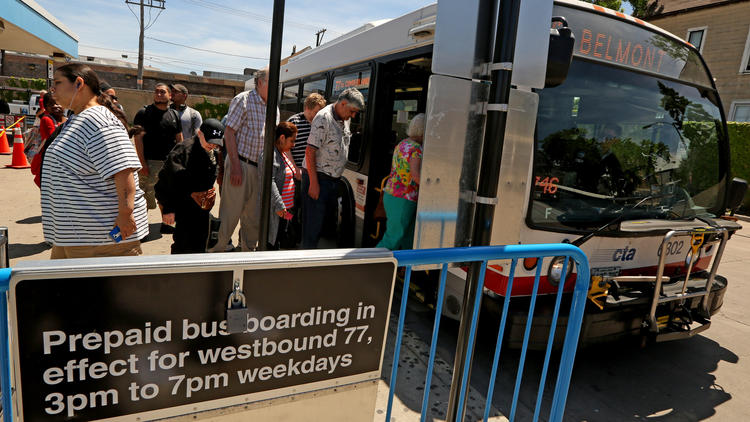 Starting June 27, riders will be able to pay their fare while waiting for a bus and quickly board the following routes:

Before boarding a bus from the designated boarding area or corral, customers will pay their fares to a CTA staffer who will have a mobile Ventra reader.

There is a clear need for faster and more reliable bus service citywide. Each of the affected routes has seen ridership decline in recent years, although they remain some of the most popular in the city.

The goal of the pilot program is to get the customers to destinations more efficiently and reduce the delays of boarding, especially during busy rush hour periods. Estimates show buses spend about 20 percent of their travel time picking up and dropping off customers.

Last month we highlighted the success San Francisco’s MUNI transit system has had with prepaid boarding.

Prepaid bus boarding is only one of the ways that the quality and speed of bus service can improve. Later this summer Active Trans will release a report featuring other low-cost ways to make bus service faster and more reliable, such as dedicated bus lanes and traffic signal improvements.

Let us know how your experience of prepaid boarding at any of the pilot locations influences your commute, and if you have suggestions for future pilot locations, by contacting Julia Gerasimenko, advocacy manager, at julia@activetrans.org.