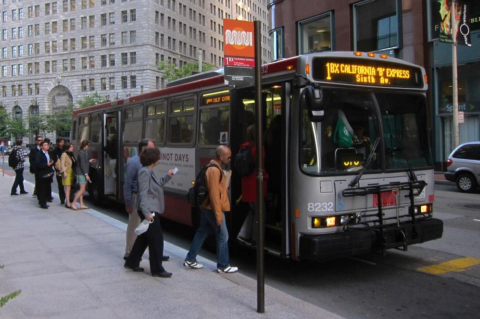 In 2012, San Francisco’s MUNI transit system implemented a revolutionary concept to America’s bus systems – pre-paid, all-door boarding for all of its street vehicles, including buses and trolleys.

Bus riders could now enter through any door of any vehicle at any time and tap their transit card on a reader that’s adjacent to the door to verify payment. Riders who don’t have transit cards could pay their fare before boarding and carry a receipt on board for proof of payment.

The goal was to increase bus speeds and reduce bus waiting time at bus stops. As Chicago looks for ways to improve bus service throughout the city, we can look to San Francisco as a strong example.

Like all other bus systems in the country, MUNI riders were previously expected to enter the bus through the front door so the operator could verify a fare was paid. This process proves to be time consuming, especially with cash fares and particularly at busy transfer points, like rail stations.

MUNI estimated that its buses spent 20 percent of travel time picking up and dropping off customers.

Thanks to San Francisco’s population boom, MUNI was experiencing the highest rate of bus boarding per hour in the country: 70 riders per hour – slightly more than New York. Switching to all-door boarding opened the possibility of even higher rates.

One of the primary concerns with this switch was that more riders would avoid paying a fare. To prevent this and preserve revenue, MUNI increased its fare enforcement staff from 41 to 54. A fine of up to $110 can be levied against customers who do not have proper proof of payment. It also focused on improving fare compliance, rather than recovering costs through citations.

Fare enforcement officers rotate to a new police district every day, and are expected to work at least one weekend day, and often travel in tandem with San Francisco police officers. Through this strategy, fare losses due to fare evasion dropped from $19.2 million in 2009 to $17.1 million in 2014 and fare evasion rates decreased from 9.5 percent in 2009 to 7.9 percent in 2014.

Contrary to popular belief that all-door boarding would encourage fare evasion, it turned out that the possibility of receiving a citation at any time made all customers more likely to pay their proper fare.

There have been other measurable benefits: reduced dwell times of 1.5 seconds (38 percent improvement) at bus stops and a modest increase in average bus speeds (2 percent).

See a report from 2014 on the success of San Francisco’s changes to its bus boarding policies.

While all-door boarding has been a success for MUNI, it isn’t the only tool that the agency is looking to implement to improve bus service. Dedicated bus lanes, signal prioritization, better parking enforcement and management, and complete, safe streets are all strategies MUNI is currently pursuing.