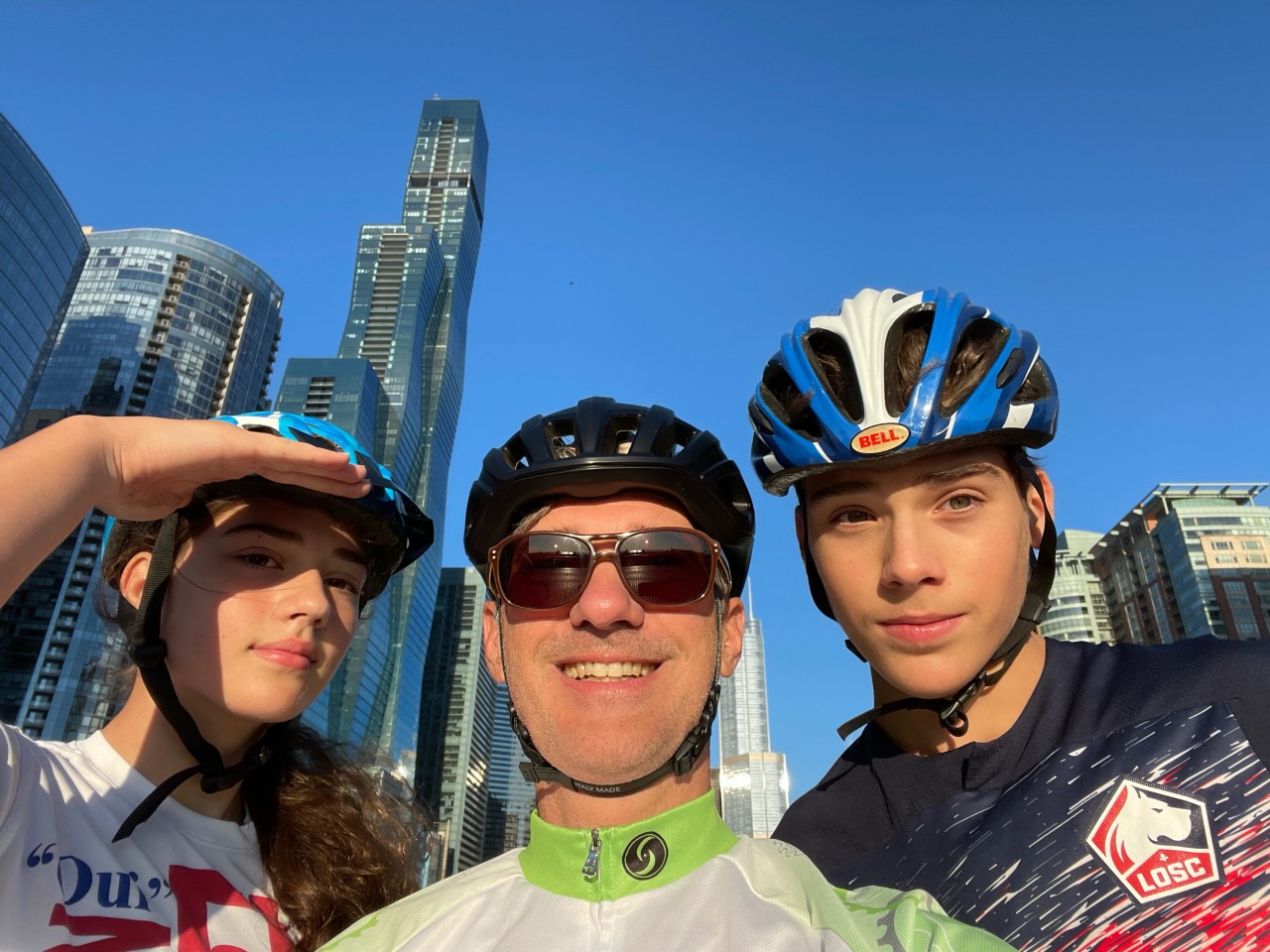 Sustainable transportation has long played an integral role in Philippe Lunardelli’s life. As someone who has regularly walked, biked, and used public transportation his entire life, Lunardelli has experienced for himself how these modes of transportation are crucial to creating healthy, thriving, equitable cities.

That’s why he has deepened his commitment to Active Transportation Alliance, transitioning to a member of the nonprofit’s board of directors, serving as treasurer, and stepping up his financial support — giving him an even better understanding of the intersection between sustainable transportation and equity.

Lunardelli joined the board in 2018, but he has been a member of Active Trans since 2003. An avid cyclist, Lunardelli became a member of the nonprofit when it was known as the Chicagoland Bicycle Federation, supporting its mission to make bicycling safe and easy. And when CBF expanded its mission to include walking and public transit and changed its name to Active Transportation Alliance, that new direction resonated with Lunardelli.

A WAY OF LIFE

Born and raised in Lille, France, Lunardelli grew up walking, biking, and taking public transportation everywhere. He never owned a car until he moved to the United States.

In Chicago, the Lunardelli family is dedicated to living a sustainable transportation lifestyle. They initially lived in Hyde Park for 15 years. This neighborhood on the South Side allowed them to easily walk, bike, and use public transit.

Lunardelli and his wife then moved the family to Ravenswood on the North Side of the city so their two children could be within walking distance of their school, Lycée Français de Chicago.

In addition, the neighborhood abounds with excellent walking, biking, and public transit infrastructure that allows the family to easily commute to work and school, access vital services like healthcare and grocery stores, and take advantage of recreational opportunities, including nearby bike paths and walking trails.

But Lunardelli also recognizes that many communities, especially those on the South and West Sides of Chicago, don’t have access to reliable and affordable modes of sustainable transportation — assets that are vital to improving the quality of life in these communities, he says.

“I realize that I am privileged to be able to work from home [during the pandemic] and live in a neighborhood where there are widely available transportation options. But that’s not the case throughout city,” says Lunardelli, chief financial officer at WellRight, a Chicago wellness technology company. “There’s so much to be done to be less segregated, including how we provide these services.”

“Coming from Europe, things really have evolved faster [there] in terms of making cities more livable with accessible and affordable walking, biking, and public transit,” he adds. “In Chicago, we could do so much better with walking, biking, and public transportation. Over the past few years, there’s this growing awareness that there’s so much inequity in Chicago. I’m glad Active Trans is addressing [sustainable transportation] through the equity aspect of its mission.”

Lunardelli is particularly proud of how Active Trans is working to improve bus service in the region. For example, the nonprofit produced the Chicago’s Bus Friendly Streets Report Cards, which rates bus service in each of the city’s wards and offers expert recommendations to improve service.

Active Trans created these report cards to shed light on why bus ridership has declined by 21 percent since 2012 while providing community leaders and activists with a compelling tool to help them in their fight to improve bus service in their neighborhoods.

He is also pleased with Active Trans’ latest legislative win. Working with Ride Illinois and the Metropolitan Planning Council, Active Trans successfully championed the passage of the new Illinois law that requires the state to cover 100 percent of the cost for building walking and biking infrastructure on state roads.

Previous policy mandated that municipalities had to pay for 20 percent of the cost of walking and biking infrastructure on state roads, while the state funded 100 percent of car and truck infrastructure. This resulted in towns removing critical elements like sidewalks and bike lanes from its final street designs because they couldn’t afford the 20 percent match — especially low-income communities. The new legislation is a significant victory for a safe, fair, and sustainable transportation network. 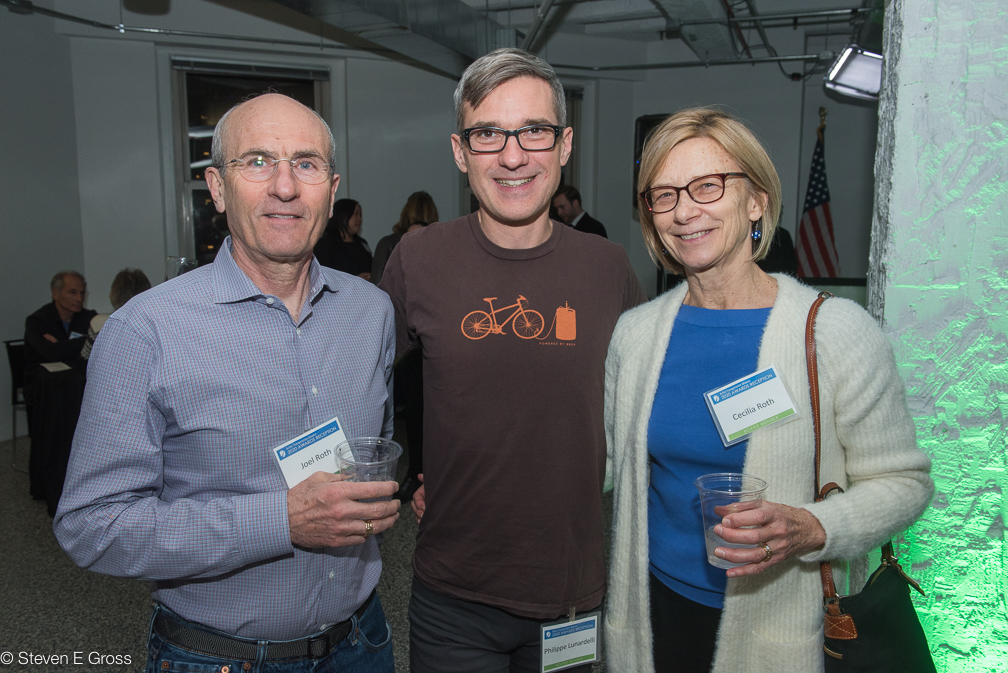 Lunardelli is also a fan of Fifth Third Bike the Drive, one of the top car-free bike rides in the nation. This year, he was thrilled to share the experience with his son and daughter.

“We just love the communal experience. There’s a certain vibe. Everyone’s very excited,” says Lunardelli, who was one of 16,000 participants in the event this year. “There’s the joy of seeing our incredible lake and skyline without any noise or danger or fumes from motor vehicles. It lets you rediscover familiar sights and see the skyline unfold from this amazing vantage point. You have all the time to notice features of the city, buildings — you get to rediscover a city that you think you already know like the back of your hand.”

To aid Active Trans in its work, Lunardelli not only volunteers his time as a member of its board and puts his financial acumen to work as the organization’s treasurer, but he is also a donor.

Since joining Active Trans in 2003, he has steadily increased his contributions to the organization over the years. But this year he took his support to the next level. Lunardelli donated $10,000 as part of a fundraising match challenge he initiated for Active Trans’ summer membership campaign to recruit new members to join the organization and encourage existing members to renew their memberships.

“I wanted to make an impact and lead by example,” Lunardelli says. “It motivated people and had this multiplying effect. That’s what we were trying to achieve.”

As his involvement with Active Trans has grown and evolved over the years from rank-and-file member to board member and donor, Lunardelli has been impressed with how Active Trans has been able to create systemic change in walking, biking, and public transportation every year.

“[Active Trans] really moves the needle through advocacy, collaboration, and policies. They know how to create movement in this field,” he says. “I’m excited to see what our advocacy efforts will accomplish next.”

Top photo shows Lunardelli with his two kids at the 2021 Fifth Third Bike the Drive.  Photo courtesy of Lunardelli.