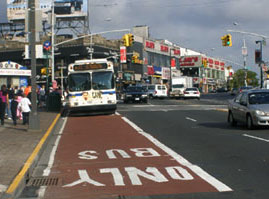 New York City buses are notoriously slow and some, like the M66 crosstown route in Manhattan, are slower than the average turtle.

The NYC Department of Transportation (DOT) and the Metropolitan Transportation Authority (MTA) are changing this through Select Bus Service, the city’s version of bus rapid transit (BRT).

Since 2008, nine routes have been added in all five boroughs and bus speeds increased by 15-23 percent.

There are a mixture of BRT features varying upon each Select Bus route, such as camera-enforced visible bus only lanes, minimum bus stop spacing, off-boarding payment kiosks and signal priority.

According to the New York Times, commute times were cut in 3.5 million hours and ridership has gone up.

However, there’s been some outcry against Select Bus, mostly from retailers afraid that a loss of car lanes and parking would hinder business. The Times reported BRT proved to be beneficial after a study revealed most customers arrived by transit, walking and biking.

Another study done by the Pratt Center identified that residents living outside of Manhattan have the longest commutes in the nation. Select Bus gives low-income people access to rapid transit where rail service cease to exist.

Although there’s been some opposition, Select Bus shows a lot of promise in New York, especially with the unveiling of two new routes this year.

The M86 Select Bus runs along 86th Street and York Avenue in Manhattan, carrying over 24,000 passengers a day, while the Q44 connects 28,000 passengers between Queens and the Bronx.

Full implementation of BRT isn’t realistic in many New York streets due to their lack of width and alleyways, but the transit authority continues to add BRT features to its nine Select Bus routes.

BRT has also made its way slowly to Chicago through the Loop Link and with the return of Western and Ashland express buses. The CTA will add traffic signal priorities to these corridors over the next two years.

These enhancements are a big step for Chicago and will open up more opportunities towards BRT on Ashland, improving the overall quality of service for the 10 million Chicagoans who use the #9 annually.

This is the second post in a monthly blog series on Bus Rapid Transit (BRT) in the U.S. Learn more about our BRT organizing and contact us to get involved.