Earlier this week, developers, city leaders, advocates, and residents celebrated the official opening of the riverfront path at Lathrop Homes, one of the first local trails built by a public-private partnership.

The trail runs for roughly a half mile north and south of Diversey Avenue on the east side of the Chicago River and features new landscaping, benches, trees, and a boat and kayak launch.

Because the City of Chicago’s design guidelines require developers to build trails, public-private partnerships will play a key role in completing a continuous Chicago River Trail.

The new trail at Lathrop provides safe passage under the Diversey Avenue Bridge, and if you follow it south of Diversey, the trail curves out into the river, offering spectacular views of downtown before its terminus at Leavitt Street (see below right).

We’re pleased the path promotes walking and biking in the neighborhood and makes it easier for residents to avoid the high costs of car ownership. And the trail offers another viable way to hop on the CTA’s #76 Diversey Bus.

The opening celebration (pictured left: 1st Ward Ald. Daniel La Spata speaking) also marked the completion of the first phase of Lathrop Homes’ transition from the largest public housing development on the North Side to a mixed-income housing complex.

The new path is another step forward in Active Trans’ campaign for a continuous Chicago River Trail.

Just this year, the city completed the Manor Greenway, an on-street connection for people walking and biking near the river between Montrose and Lawrence Avenues.

With construction well underway on the 312 RiverRun, it’s expected this two-mile path between Montrose and Belmont will open in the fall of 2020.

And Active Trans is already hard at work developing neighborhood-backed concepts for connecting the new path at Lathrop Homes to the 312 RiverRun. Stay tuned for an upcoming report with ideas for making this trail connection.

Thanks to all this progress, Chicago is close to having a continuous river path from Diversey Avenue to Lawrence, where you can pick up the North Channel Trail in Ronan Park. 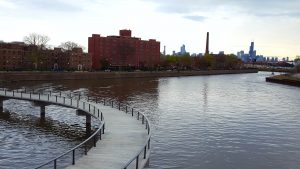 Although new riverfront trails continue to emerge piecemeal, it’s important to keep in mind that only a complete trail will return the greatest public benefits, such as healthier neighborhoods, a cleaner environment, and vibrant local economies.

If you’re excited about the idea of a continuous Chicago River Trail, please join the campaign so we can keep you up-to-date on the latest developments and advocacy opportunities.